Early this week my brother David came to visit us for a few nights. He lives in Cape Town and had never met Wren so I was very happy he managed to squeeze us into his NY trip.

It was a busy few days but we managed to squeeze in time to visit the newly opened Ravenna Eckstein Playground, for David to hit a few tennis balls to Frost and to teach him Fox and Geese on the chessboard. Frost was quite excited to 'play tennis' with David because he was a successful tennis professional on the tour circuit for many years and Frost is impressed by his fame. David won the French Open Doubles and still plays at invitationals although his main gig is now Commercial Property from his home in Cape Town, South Africa. Frost also enjoyed the visit very much. By the end of it he loved to hug David and wanted to talk to him all the time.

David and the kids at Ravenna Playground. Wren is a bit distrustful as you can see in his expression. 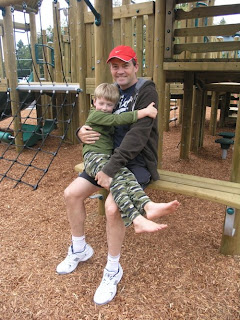 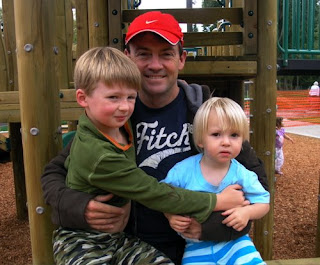 David and Frost play fox and geese on a lego chessboard. This is on the soggy old sofa in the living room where I brush out the cache of crumbs most mornings. 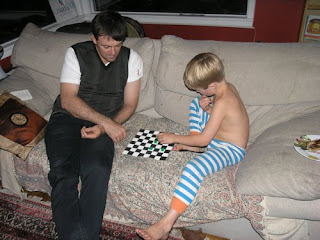 Wren's little Playmobil people contemplate leaping from the table in one of our early morning games while everyone else is sleeping. Is this my exhaustion acting out? The other pictures are David, Wren and Wren & I. All pretty self explanatory - you can figure it out so I can go to bed, right? 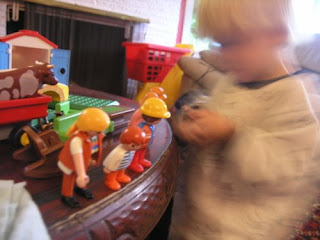 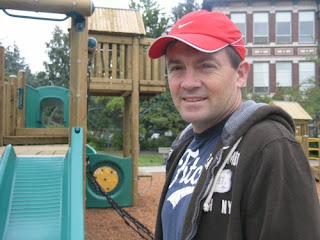 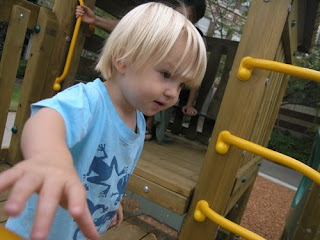 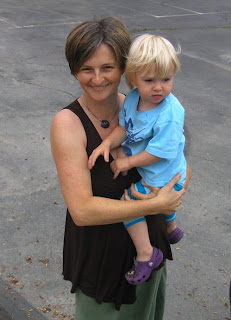 Posted by Shannon at 2:41 PM No comments:

The nurse did a hearing and vision test and everything was normal.

He received a dose of Flumist. We do this to help protect Wren against the flu.

The main topic of conversation was Frost's recurrent sore tummies. His physical exam was normal so the Doctor suggested he had either an allergy or acid reflux. Since Frost sometimes complains about acid in his mouth, we are trying Mylanta first and Zantac for a few weeks if that doesn't work.

This evening he had a dose at dinner and he said he felt better soon afterwards. I am not sure whether that was a placebo effect or a desire to please but he certainly ate more dinner than usual.

Our Doctor also said that it was time that Frost ate what everyone else did at dinner and it was OK to let him go hungry and complain a lot until he realized I was serious. Also, that we need to cut down on candy and treats until he eats three meals a day and up to two snacks that are relatively healthy.

Frost was listening to all this and has taken it very seriously. When we went to the pharmacy to buy the Mylanta he said "no candy for me, damn" and did not try and choose any.
Posted by Shannon at 2:15 PM No comments:

No, we haven't heard

I have been asked a number of times whether we have heard from Stanford yet. Nope. We were told 7-10 days, last Friday (6 days ago). So, hopefully by the end of this week or by mid next week.
Posted by Shannon at 12:30 PM No comments:

Bible Stories for the Sceptical Son

I have been reading a children's bible to Frost at bedtime. The stories are retellings of key events and stories in the bible and include historical facts and explanation.

After tonight's tale of the Tower of Babel and an explanation about the patriarchs Abraham, Isaac and Jacob we turned to some photographs of helmets excavated at UR near where Abraham began his journey.

Frost looked at the photographs with a puzzled expression.

I explained that most people believed that the Bible held many historical facts and many people believed it was the word of God and was absolutely true. Still others, thought there was some special and magical stuff in the world but didn't know what it was, yet. I added that this was just my view of things and that he would have to come to his own opinion and I would respect that.

He looked at the photograph again and said "I think I am 50% believe that there is God and 50% not-God. I think I will wait a bit longer and see what the scientists discover and be just 50% until then."

I suspect that the photographs differentiate this bible from other myths and legends (and bible stories) I have read before. Surely, someone taking pictures of these things so long ago is proof they happened.

Tomorrow night we will reach the part on Sodom and Gomorrah [which comes with wonderful photographs of salt formations in the Dead Sea and a lurid illustration of a burning city.]
Posted by Shannon at 1:55 PM No comments:

I ran into Frost at 4am having a pee in the bathroom. As I tucked him back in bed he said "can you pass my book?"

Wren was crying from the next room "Mama, muk, mama, muk" in a repetitive cycle so I had to give a persuasive and succinct explanation of the need for more sleep. It went something like this "go back to sleep. Now. Please."

He was suspicious and asked whether we were all going back to sleep. I insisted we were.

As it happened, Wren managed to sleep some more but I tossed and turned and found the new purple sheets too slippery, plagued by vague anxieties and flashbacks to living in other places and spaces and then the newspaper delivery thumped in the near distance and I gave up trying to sleep and sort of fell asleep. Anyhow, I wasn't too upset when Wren woke again at 5.30am and wanted to read the nursery rhyme book many times.

His favorite page is "humpy dumpy" - he likes to pull a little cord and make Humpy drop down to the ground. Humpy is velcro and has three parts which you can pull off when he 'falls'. After a few repetitions Wren had a crafty look and hid the pieces so I had to actually get up from the bed and hunt for them and got the giggles with his sophisticated cunning expression which made him do it again and again. I have had to ZIP up the nursery rhyme book or the pieces will be lost forever.

Last night our school had its back to school picnic. As registrar it is an exciting time to see everyone who has enrolled during spring and summer finally become part of the community. Frost has a school camp sleepover next week [although he assures me he is going home late at night instead of sleeping over] and some social activities and the school starts on September 9th.

David has been visiting from Cape Town and I shall be very sorry to see him go. He has a bigger view of the world than I do at the moment [trapped in America on the heart-surgery leash, I am very keen to visit my familial diaspora] and David has the added benefit of doing a mean foot massage [I had a look at a reflexology chart and have diagnosed myself with a sore adrenal spot on my foot. This is what my naturopath said a while ago and prescribed a licorice syryp which I will swig before coffee].

Okay, time for breakfast and coffee and licorice and cat feeding and all that fun stuff.

Frost is still asleep.
Posted by Shannon at 11:10 PM No comments:

In my attempts at positive discipline in the family I heard myself say "Thanks Frost. Thanks for stopping Wren hitting the telephone."

How did I get to that point? Here is a typical scenario.

[FROST IS LYING ON THE COUCH ENTICING WREN TO PLAY. WREN IS PLAYING HIDE ON HIS OWN]
Frost: Stomp on Frost, Wren. Stomp on Frost
Wren: Hiding, hiding
[Wren comes over to Frost on the couch]
Frost: EEEEAAAH. He is BITING me again. [laughing hysterically] Stop biting. NO BITING.
Wren: BITE
Frost: ARGH!
Wren: Its ok? ok?

[FROST GETS UP AND RUNS INTO THE KITCHEN. WREN CHASES AFTER HIM WITH A PLASTIC DAGGER. THERE ARE SOME THUDS AND MUTTERING]

Frost: EEEAAAAAAH. Shannon, Wren's throwing breakfast cereal and he threw the unbleached all-purpose flour but I am going to put it back.
Me: Thank you Frost.
Wren: more
Frost: No!
Me: What does he want now?
Frost: He wants to chase me... CHASE!

Wren: Ah! Ah! Nose, nose. Nose ow.
[WREN COMES FOR COMFORT ABOUT HIS BANGED NOSE. IN THE MIDST OF THIS CHAOS THERE IS A KNOCK AT THE DOOR]

Frost: Ah, uncle David is home.
David: Oh, has Wren got a big sword? Is that a Goblin Sword?
Frost: [laughing]

Thinking about this next Surgery, I have been frustrated by how difficult it is to choose a surgeon. Even when institutions are given ratings based on reputation and outcomes, they are controversial. Smaller institutions say that they are unfairly penalised by not being as widely known and larger institutions claim that they attract a higher number of complicated and referred cases. Others claim that, because a positive outcome is basically "being alive 30 days post surgery, outcome measures are poor indicators because institutions may have very sick children post-op which are not really successful cases.

While watching the Olympic Gymnastics, I had an idea. Why not give each case a "start value" which could provide a measure of difficulty and something by which to compare institutions. It need not be every case - a sample of a hundred cases would do. Start value would be assigned based on a coded table: coarctation = +2pts, prematurity = +2pts, respiratory distress = +2. The final outcome at 30 days would be subject to various outcome counts.

OK, this is totally unfeasible but that's what I want now. I want a table that says the mean score of case difficulty at Stanford is 55.6 and at Seattle Children's its 45.4. The outcome comparison would be interesting in light of those numbers. I am sure there is some arcane and unpopular discipline which tries to create these outcome-measures for medicine and generally I am not a fan BUT in this context, I am.

While we are on my wish list for dealing with hospitalizations. Other than the best surgeon, here it is:

1) A single "point of care" during a hospital visit. This is a doctor who takes primary responsibility for our whole stay and is available to consult daily. This is not a team effort. They should be briefed by the other doctor if they were not on shift but still 'our doctor'. They are not as elusive as an endangered species. They listen.

3) Email access for routine matters of scheduling, prescription refills and non-urgen t inquiries. Never having to wait 5 minutes and leave a message on a nurses' line again.

3) Phone appointments for significant results and reports. Eg. Instead of "I will call next Tuesday or Wednesday", "I will call on Tuesday at 3.15pm." This would save me from waiting for hours in hope of a call and then receiving it by cell in the shopping center without a pen and unable to hear properly. If the call is just to say "the results aren't in yet, I am following up with the lab" that still makes me happy.

4) A better transition from ICU to floor. ICU is the 5 star hotel you never want to stay at but then its like being dumped from your dubious celebrity into a motel without a turn-down service. I would love more transitional support - partly to help to parents adjust from their state of post-traumatic stress to a feeling of competence again.

Frost needs bedtime. I shall stop my rant.
Posted by Shannon at 12:37 PM 4 comments: