Wren is actually growing those molars I have been blaming things on for ages. The bottom ones continue to swell but the cusps of the upper ones have cut through. Strangely, this does not seem to be causing the sleep disruptions of previous teeth so I am not making a big deal over it.

Making talking noises
Wren likes to chatter when I talk to him. He mumbles and murmurs his part of the conversation and copies simple sounds like "ma-ma" "ba ba" "da da", tongue clicks, shssss and some others. "lyah la ya la ylala" he says.

Wren understands a lot. If you say "hi" and wave, he waves back. He understands these phrases at least in part: "Where are the fishies?" "Kitties?" "Frost" "Want to eat?" and quite a few others.

He is very opinionated about what he wants - especially when he wants me to pick him up. He grabs my leg and shout-cries loudly. Other times he reaches out his arms with plaintive head rolling.

Doors and Drawers and Bon Ami
He is an avid explorer, opening cupboards, doors and drawers and trying to eat the Bon Ami scourer he found in the kitchen cupboard this morning. We bought more babyproofing clips and traps at the hardware store yesterday and will be putting some in today. He is also exploring what he can copy us doing. Yesterday i was feeing him peas one by one and he picked up a pea and put it in my mouth. After that we played "feed each other peas".

Clapping and turning
He has learned to clap in the past few days and really enjoys how excited I get when I clap and then he claps. Along similar lines, he waves if you wave at him and say "hi". Its a flappy wave but he feels very pleased and smiles a bit toothy tongue-filled smile and says "heee".

After weeks of turning him around to prevent head-first plunges off the bed he has recently learned to turns around to go "feet first" off beds and couches. He still intends to go head-first downstairs and must be prevented. He climbs upstairs rapidly.

Sleep stuff
He is sleeping better. He goes to bed shortly after 7pm and rouses sometime after midnight when Joshua is still awake. Most times he settles himself back to sleep at that time. He wakes again around 3.30am and I nurse him. After that he makes it until 5.30am(ish) when I go in and nurse and snuggle him until we get up about 5.45-6am. Last night I learned the foul news that daylight saving ending will pull time forward again so Wren's current 5.30am waking will be back to 4.30am. That means I have about 3 weeks to drift him to an 8pm bedtime with hopes of a 6.30am wake-time pre daylight savings. Wish me luck!

Playing Games
Wren is starting to play games with us and some of his toys. For a month or more he has been able to put balls into the top of his baby-ball rolling toy. He picks up a ball, crawls to it, reaches up and puts the ball in the top and then tries to catch it as it rolls around the track. He repeats this 2 or 3 times before tiring.

After diaper change he always rolls over and crawls away at maximum speed to our bedroom where he climbs on the bed and plays his version of "war" (aka pillowfight) by pouncing dramatically onto the quilt and lying facedown for a while before popping up with a smile. He will also pounce on an unsuspecting person's face which can be quite painful for all concerned.

At infant co-op last week he played "peek-a-boo" for the first time, putting his face into a scarf and peeking out when we said "peep o".

A bit from an email
Here is something I wrote to my friend Natasha which has a bit more info on some things Wrenish:

"Wren is doing fabulously. After a period of fever when he made me anxious about his heart by being clammy and huffing a bit when he exercised, all is back to normal. He has learned to clap, open and close cupboard doors, chatter nonsensical stuff, play games like peek-a-boo and chase-crawl and understand lots of things I say (bang, splash-splash, bouncy?, eat? nap-time, night-night, "where's Frost?", fishies, where's kitty? among others). He is very cute to look at since his face is thinning out. He can stand unassisted but shows no inclination to walk.
I would describe him as a serious but happy baby. His only downside is a very strong attachment to me. He has started to cry and reach out his arms if I hand him to Josh, let alone a babysitter or stranger. This makes all my newfound cash for babysitting money a bit more difficult to spend. I am hoping he becomes familiar with the babysitter and the transitions are easier."

And Frost writes a peculiar poem
"I am a pretty good singer" says Frost, coming in from his bedroom. "I have made up a poem" He starts to sing the poem to me. Here it is:

I think the message of this post is that while Wren is becoming more intelligible, 6 year olds are still a mystery to me.
Posted by Shannon at 12:55 AM 1 comment:

Wren stayed home with Joshua while Frost and I went to Alexander's 7th birthday at the Ice Rink. Frost had never tried ice skating and found it difficult and wobbly. I took him around a few times but after half an hour he wanted to take off his skates and stop. That was okay - he said it was fun but scary. The big highlight was a candy machine with a claw which allowed you to grab a random piece of candy for 25c. On one occasion the machine returned TWO quarters instead of one. Zephyr and Frost found another quarter abandoned in another coin return and begged for another quarter to buy a tube of candy. AFter the birthday party Zephyr came home with us and went to Brickcon - a lego convention at the Seattle Center Pavilion. We met Alexander there and then played in the fountain.

First, here is a picture of Wren standing alone. He doesn't do it all the time but is quite stable when he wants to be. He has no intention of walking anytime soon but he is quite comfortable upright and cruising along tables and chairs. Unfortunately all the uprightness and agility have led to table climbing, stair climbing, chair clambering and lots of falling over. This morning Frost pushed him off the coffee table and he bit his lip with lots of bleeding. 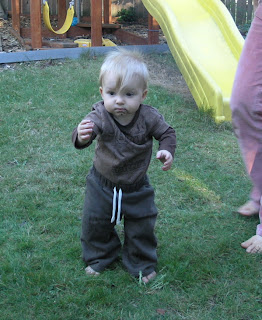 The following pictures show Frost, Zephyr and Alexander in awe at Brickcon. They were overwhelmed to the point of running from exhibit to exhibit in a random way shouting about things they saw. They were most impressed by the poses and activities of minifigures. The structures were amazing but not as captivating for the kids. I let each one buy a bag of mixed lego and a custom lego weapon and helmet from Brick Arms . 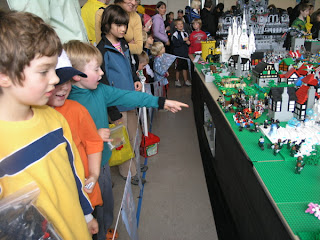 Frost pointed at everything and talked non-stop. He had flushed cheeks and couldn't focus much in his excitement. In this picture he is pointing out what some minifigures are doing in the castle army. 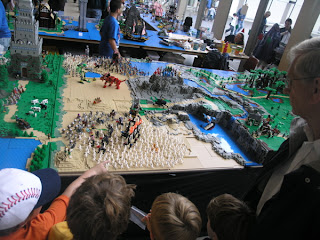 And in the next one they are admiring a Skeleton Army. Frost wants hundreds of storm troopers for a storm trooper army. 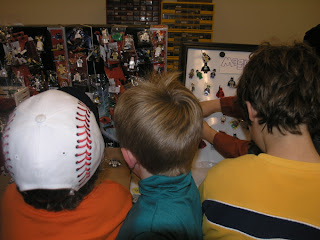 In the final picture they are looking at a shop selling customized Lego STar Wars minifigures. Frost is begging me to buy General Grievous or his bodyguard or a storm trooper.
Posted by Shannon at 3:02 PM No comments: