Wren says:  "School is getting a tiny bit better.  I am getting more used to lunch and I know more.  I am still worried at lunch but I know that every single time in lunch my teacher always comes eventually even if he is the second to last teacher to come.  Yesterday, the third graders were already in the room which was stressful for me, really really stressful! BUT eventually he came."

"Today is probably going to be worse because I am going to ride the bus to school and it might be late or lost or you (Mum) might not find the bus and I might not see you when we arrive." 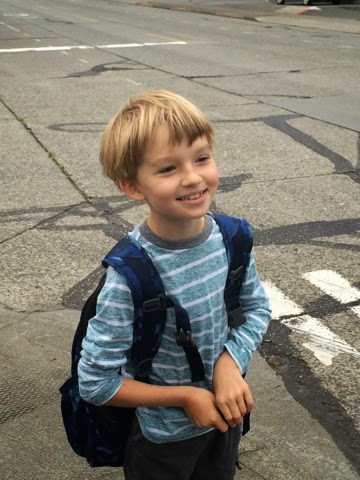 Although Wren reports dire things, he is doing well.  We had a fabulous pick up time yesterday.  Wren was happy, said he had a great day, went to recess and back with no problem.  He was very happy because Mr Burke came to his classroom and helped them out to recess and stayed there.  I had asked the counselor to keep an eye on Wren today and Wren really appreciated that he was there.

After school, Wren said he has 4 friends.  He asked to stay at school and play with R and I met R's dad, Mr Z. Mr Z is an ex-Marine who was in the middle-east.  He is a badass bike rider and his wife is a computer engineer with a masters in Math and they lived in a Japan for a few years so they like... well... Japanese things.

Wren dislikes another boy whom he called "an angry boy" who stamped on a stuffed beanbag unicorn at gym in a fit of rage, twisted it up in his hands and shouted "NO".  It was not his unicorn and the unicorn's owner was sad.  Wren was sad too.   The Angry Boy also came up to wren at break and asked him if he wanted to fight.  Wren says he said "nah" and went another way.  This child is in another classroom.  I told Wren that some kids have trouble at school and some kids have trouble at home and perhaps that kid has trouble at home too.  Wren is planning "to say No to whatever he says and just walk away" if he sees him again.

Anyway, all went well.  Wren is riding the bus today for the first time with the neighbor and I will meet the bus at school to welcome him.  He said he was looking forward to it yesterday, by nightfall he was fearing it and by morning he was planning for various Worst Case Survival Scenarios.

Frost is fine.  He is still doing PE instead of Com Sci or Drama or TA.

This week my Facebook feed was full of photos of backpack-toting children on front steps wearing the required hopeful grimace for the first day of school.  Both Wren and Frost had their first day moments - both were starting at new schools.

Here is Frost on the first day of 8th Grade.  This is the last year of middle school


And here is Wren on his first day at the large public school near us.  Their schools start almost 2 hours apart (Frost at 7.50am and Wren at 9.30am) so they did not go together.

Although both boys are starting at new schools, the change for Frost is less dramatic than Wren.  Frost's "highly capable cohort" which works a year or two ahead of standard curriculum was moved from one huge school building to another huge school building. The new building is North of us so it is no longer on the way to work.  This means he has to catch the bus.  Luckily, one of our neighbors also attends the same school and we have been granted a fairly close local stop in the mornings.

Frost missed the bus on the first day so I drove him and dropped him outside in a grid-lock of cars and buses.  The school community is in an uproar because the school is close to a major arterial that has gun shops, medical marijuana dispensaries and topless baristas.  The school is also opposite a high school.  Many families in the 'walk zone' around the school don't want their kids walking across or on this road and found no good public transport alternatives.  This had led to a politicization of school transportation and a honk-by among some parents.

We sailed through and dropped Frost off without incident.  He did make it to the bus on Day #2. 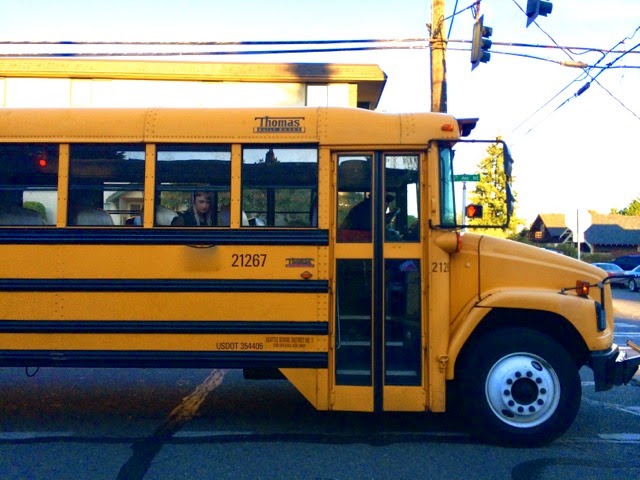 Frost said his first day was fine.  The school is a lot smaller and they have these random holes in the wall that look like laundry chutes or vents that connect UP to an unknown destination.  The kids call them "mystery laundry chutes" and are curious about them.

Frost's only complaint is that he has not got into computer science or TA.  He is instead in PE.  He doesn't want me to intervene but has put in a class change green form and feels hopeful.  He has not yet learned that parents are useful when dealing with bureaucracy.

Frost's new school has a strong focus on community building and have lots of homeroom discussions about moral issues like "when is obedience the right action?" and what expectations there are for citizenship.  Frost told me that he started the classroom discussion on obedience with the opinion that one should obey rules when the cost of obedience (in terms of loss of freedom or experience or consequence) is less than the consequences of disobedience.  Josh's response was "Well, whenever you disobey we are going to kill you."

Frost has had minimal homework and has not found his computer gaming to be much interrupted by schooling.

Wren was very anxious for his first day.  We arrived early along with the 400+ other kids and families in 2nd Grade.   It was ridiculous.  At KapKa, there were less than 40 kids in the school while at the new program there are 850 kids in the building.   He found his teacher and joined his class and that was the last I saw of him till the afternoon.

The good things first.  Wren really likes his class-room teacher, art, his own locker and being in his class.  He has a friend who sits at his table with him and is enjoying the work and the class activities, especially read-aloud. He has found the school counselor ("He says he is a teacher for everyone to help kids") and liked him a lot.

The Bad Things Second. Wren hates, fears, dreads and weeps daily during the half hour of break-lunch.  This period requires him to move (with some of his class) from the safety of his classroom and teacher to either the library or the rear playground.  Here are the two scenarios with their issues as Wren sees them.

1) If he chooses Rear Playground:
This is very noisy and overwhelming.  There are more than 100 children running around.  There are no teachers only playground grown-ups I don't know.  After 15 minutes you have to line up. I didn't listen so I don't know the line-up rules.  They might get cross if I don't line up when they whistle.  I might GET LOST!  You have to line up QUICKLY.   If I cry people will see me and think I am pathetic.  The good thing is that I can just follow the kids to find my lunch box because they take you to the lunch boxes and the cafeteria.  I can't tell anyone I feel overwhelmed or miss my mom.

2)  If he chooses Library:
This is nice and quiet and I can cry without anyone noticing and feeling embarrassed.  I don't actually read.  I just pretend to so I have a place to be quiet and not have people see me crying.  But I am afraid in the library because when its lunch (15 minutes) I don't know how to get to the lunch boxes.  The librarian says she can't take me because she has her work so I will be LOST IN THE SCHOOL!!!    She will be cross with me if she has to take me so I cannot go to the library ever again.  I don't know the way from the library to the lunch boxes because they moved them and the cafeteria has a one-way rule so you can't go IN the door I know.  It has a sign "Exit Only".

On the second day I went into school with Wren and walked through all the pathways and routes he might have to take during break.  Still, he says he cried 7 times during break / lunch and I noticed he didn't eat much at all.  He says this is because he was worried he would get lost and was overwhelmed.

On Monday, I am going to take an hour or so in the middle of the day and come and walk through the break-lunchtime with Wren.  Josh is going to do it on Wednesday.  Hopefully he will become more comfortable with the process.  I have also asked his teacher and the counsellor for suggestions.

Wren did visit his "talking doctor" this week.  She observed that he seemed extremely happy and proud at how well he was doing at school so I think it is a case of high-intensity.  He feels VERY good at managing in his big place and big class but he feels very scared in the building context.  Joshua has told him that he feels like Harry Potter did when he arrived at Hogwarts.  At first it was very overwhelming but after a few books he knew every place at Hogwarts.


Wren keeps saying "I hope it becomes my Hogwarts SOON."


Wren is not riding the bus to school yet because we want him to feel confident during the day before adding on another perceived risk.

This weekend, Wren has his first soccer match of the year and we hope to go on a mushroom-scouting hike tomorrow.