Spiderwalk and a little illness

The kids are obsessed with Halloween and it seems to have been going on forever. Wren throws tantrums on car trips when we drive past "'alloweens" too fast for him to gaze upon. This evening Frost went to the Zoo Pumpkin Prowl with Zephyr and came back with his first stash of (mostly healthy) treats.

Wren is so compelled by Halloween that he insisted on taking "big spider" to the park with us. These are the pictures at the park on Monday.

Wren brings the spider to the park. It is hard to carry and one leg keeps falling off. 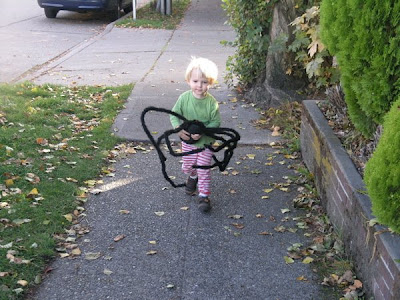 The spider discovers puddles of water and gets "bit wet". 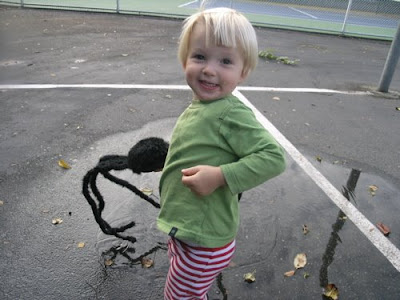 Spider tries hanging on a bar. Wren can do it too. 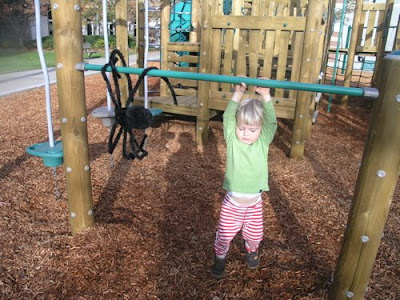 Spider goes for a swing. Other children gather to look at spider and I scan them for signs of imminent sneeze and respiratory distress. One little girl is covered in mucus and keeps wanting to take spider. I suggest we take spider for a walk up the hill and Wren chases and throws him down again. 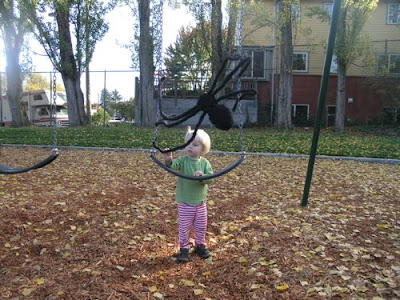 Last night Wren had a very interrupted sleep - waking about 5 times for varying lengths and seeming to settle with Tylenol. This morning he told me he had sore ear, sore throat and sore head. I don't think that was all true but his lymph nodes are swollen and he may have had a sore tummy. Its possible he is a bit allergic to Kiwi fruits which he had for the first time yesterday but since Frost woke with a painful upset stomach (and was off school) it may be a virus. He seems fine at bedtime but is a little stuffy in the nose and snores lightly.
Posted by Shannon at 1:31 PM 2 comments:

We now have lots of homework and information to complete. Some points and issues:

1) Wren will need 4 units of blood during surgery. Do we want to offer our blood for him? We may not be able to be designated donors because They require blood 48 hours prior to surgery to allow time for processing and testing. We can either provide "designated donors" or use the general blood supply. Josh would like to donate if he can. I am investigating.

2) We need to know Wren's blood type. This is not in the notes I have. It may be in his chart records I requested but I have mislaid them in the reorganization of the office. If I can't find them and we can't get them from Children's he will need a blood draw for blood typing at our pediatricians.

3) We check in for pre-op at 7.30am on the 6th November. We need to give Wren a good bath the night before surgery. The actual surgery time will be posted on the pre-op day and we will be advised at that time.

4) If Wren gets sick between now and surgery we need to see our pediatrician to evaluate whether he can have surgery. In general, he cannot have respiratory infection or fever or exposure to chickenpox. Diarrhea and other conditions may delay surgery too.

5) Child Life only consults with children age 3+. I am going to investigate this. We really liked Child Life's involvement up here.

6) There is no sleeping in the CICU rooms - you are supposed to stay and sleep in the Parent Waiting Room nearby. The ward rooms usually provide a sleeping facility.

7) We will be approached to consent for Wren to participate in 2 clinical trials. One deals with post-operative wound infection through the application of silver dressings to the sternal wound. The other involves the use of heparin post-operative. The latter is endorsed by Dr Hanley, our surgeon.

Got to run. Hoping the floor installation shows significant progress and Wren is still napping a short while more.

EDIT: We have found the medical records. Wren has A+ blood type. I am B+. Joshua does not know his. The kitchen floor is done!!
Posted by Shannon at 6:11 AM 3 comments:

If an asteroid struck earth would Wren's surgery be delayed?

I didn't get a good sleep last night. Wren woke at 2.30pm and his desire for 'milk' borders on pugnacious. I have been trying to wean him from his multiple night nursing so I let him cry a while. Eventually, he became hysterical and cried "Mummy come back! Mummy gone out," so I rushed in to console him. He was live wired and hiccoughing and it took half an hour to get him back to sleep (without nursing) then he woke when I tried to creep out. I caved after an hour and a quarter and nursed him to sleep.

For the final hour of sleep I had vivid dreams.

We were in Stanford and Dr Hanley and his team of cardiologists was trying to speak with us about Wren's case the following day. The problem was that I was like one of those old people in a recliner with a tartan blanket over my legs and I kept falling asleep while he was talking. Finally, I decided that it would be okay to fall asleep and let them handle everything.

But I was woken from my sleep, still in the hospital, by a giant explosion in the sky.

I looked up and a huge black cloud was barreling outwards expelling pieces of things from space. There was an ironing board, pieces of a plane, ropes, buildings - all exploding outwards at 30 000 feet. In retrospect it was an image from a show called Time Warp in which we watched men blending up cellphones in slow motion.

After the first explosion there was a period in which it became like a firework display with triangles of blue lights moving in slow arcs. I thought "ah, its an alien invasion."

Everyone started running to hide from the debris that fell from space. It was raining huge raindrops of molten stone and the sky was cut up by lines of billowing black clouds and chunks of cars thudded down.

Eventually, things quieted down and nobody nearby was injured. Crowds of people gathered in the hospital room and discussed what it was. Someone asked whether it was Aliens (which is what I thought) but a doctor said he had received word from NASA that earth had been hit by a huge asteroid and "they are sending a fleet of jumbo jets into the cloud to see what's in there."

I just thought "F*ck. Will Wren get his surgery tomorrow?"
Posted by Shannon at 5:12 AM 1 comment: