Early evening close to the high tide is one of the best times to catch crab and squid from the jetty. The crabs that live there are called "blue swimmer crabs". They swim sideways. If you lean over the jetty in the right light you can see the shapes of crab walking or swimming sideways on the sea bottom below.

It is very exciting to hunt crab. You throw a crab net from the jetty tied to a long thin rope. You tie the other end of the rope onto the jetty railing so that you can retrieve the net. Its also a good idea to tie a float to the end of the rope so that if you have the misfortune to drop your pot into the sea you can still swim and catch it, rather than losing the pot and the rope to the bottom of the sea. Here is a picture of the type of net we were using. Mum has 4 nets. You are allowed 4 per person so the jetty can become quite crowded and you have to juggle for good spots. 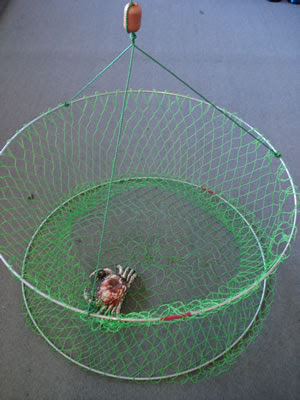 Before you throw the crab pot you bait it with bits of fish. We saw many people baiting their traps with fish heads but our best results were with parts of a squid someone had saved in our bait fridge. Our one crab net caught 7 crabs. Five of them were big enough - over the minimum size of 11.5 cm across the shell. 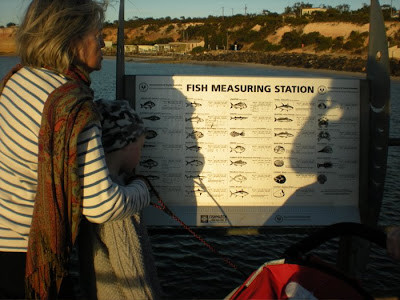 Mum at the Fish Measuring Station which explains sizes and numbers for each catch.

When the baited traps are in the water you have to check them every few minutes to see whether there is a crab in the net eating the bait. The pot lies flat on the bottom of the sea but when you pull the rope quickly it lifts up and forms a basket with the crab inside. Sometimes if you are not fast enough the crab swims out as you raise the pot. Other times, the crab eats and walks off before you check your pot.

Frost loved checking the pots. He ran up and down looking for crabs and shouting out about any he saw. Mum is an expert crab hunter and gave lots of advice helping us pick spots and tug up the nets when a crab was in it. 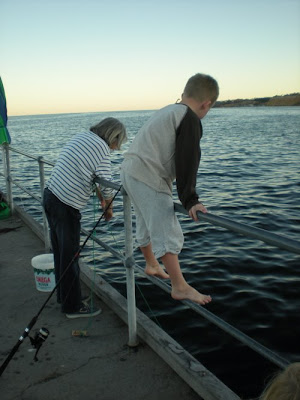 Here is Mum showing how to hold a crab. They have very sharp claws so you have to be careful. This crab was caught by someone else on the jetty but Mum helped them catch it from the net and put it in the bucket. 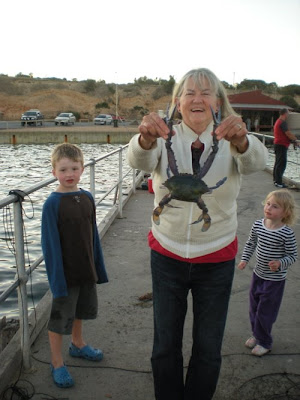 Frost also tried his hand at squid fishing with a fake prawn lure. We didn't do it often because he wasn't safe to cast on the jetty with so many people around. I was a bit of a danger myself! However Frost and Wren both liked holding the fishing pole and the chance to catch something. I was really surprised that Frost was not upset when other fishermen caught squid and flopped them down on the deck of the jetty. He was curious and excited and wanted to catch his own. I was the one who was pleased not to catch one. They have such big eyes I would want to let mine go. 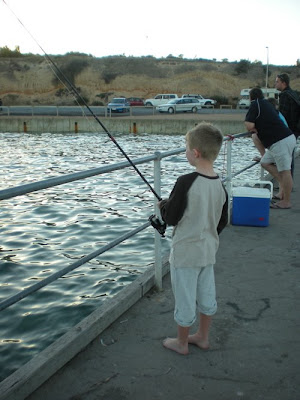 We are back from Mum's house at Port Julia on the York Peninsula. Its a beautiful open plan house overlooking coastal scrub, a short scramble down a beach trail to a nearly deserted cove. Each morning I woke (around 5.30am) to a blush of red over the seaward horizon and every night we watched the full moon rise in the cobalt sky. 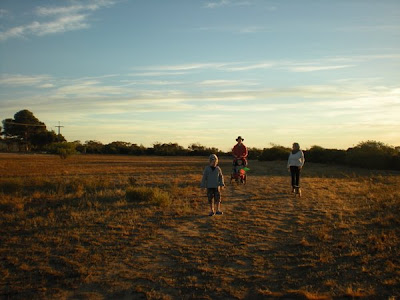 Frost, Josh (pushing Wren) and Mum on an early walk to the Jetty.

Our days settled into a routine - down to the beach for a quick morning swim before the receding tide made it too shallow to swim over the weedy reef which emerges by mid-morning. Later, Mum and I took the kids out on expeditions to look for fossils or to the Fair. Later, we stayed home for lunch and naptime during the hottest part of the day before heading off in the late afternoon to swim or catch crabs from the nearby jetty. Underneath the jetty at low tide where we had a picnic and swallows swoop. 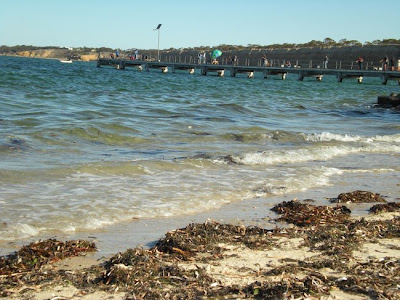 The Jetty near high tide.

We tried fishing for squid from the jetty and Frost learned to cast with the small rod (minus a hook). At first he had no idea about fishing but was worried "there would be lots of blood". When he saw a few squid caught he became quite keen and wanted to fish. Wren was also excited about holding the rod and reeling it in. Here we are practicing fishing on the local beach. I shall post a separate story about crabbing because we enjoyed it so much and it was such a BIG event. 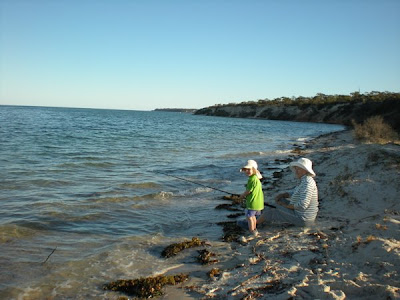 Wren 'fishing' at the cove at high tide. Note hats and sunshirt! 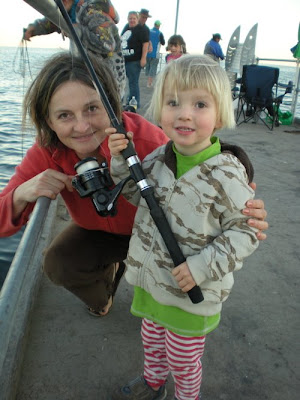 Wren and I at the jetty with the squid hook on. Note GREAT EXCITEMENT on Wren's face.

Every day we dug holes and built castles on the beach. Here are Frost an Wren on the way to the beach with the beach shovels. Wren has started to call all green things "minty" color. In Australia there are many mint flavored green things and delicious milk chocolate with crunchy green flakes in it (mint crunch?). Sadly, the minty shovel broke during castle construction so we need a new one for Kangaroo Island. 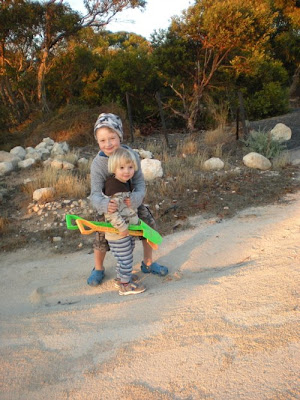 Joshua is over the worst of his jet lag but is in an unusual sleep habit of going to bed at 9.30pm and waking at 7am. We bought him a kangaroo hide hat at Trims and here he is while watching Wren (Frost and Mum are crabbing off the jetty). Josh has managed to squeeze in some Bejewelled on the iPod and reading of one of his epic 5 book series. He would prefer more rain and gloom but is tolerating the sun fairly well with the help of the hat. 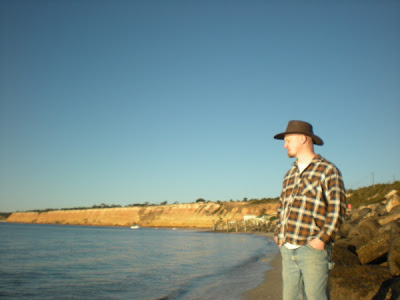 Frost loves the boogie board Granny bought for him. Since there are no waves to speak of Frost has made up a number of games (or tricks) to do on the board. He tries to stand on it, jump off, does slo-motion replays of the board flipping over and hitting him in the face before landing on his head. He splashes about with goggles on looking for crabs and fish but also likes getting salt water in his eyes.

"I like doing HARD stuff. I don't just like doing 'lie on this board' stuff. I like doing WOAH, HEY, ARGH, stuff. Well, there were things I attempted to do. My funnest thing I attempted to do was stand on my board and once I tried to jump in mid-air and do a spiral with my board and land in the water. I failed at that too. There were about 5 things I did succeed at. Like... like going into the water with my board, throwing my board in the water and jumping on it. That was a really fun thing."

Here he is in the water off "our beach" near the house. 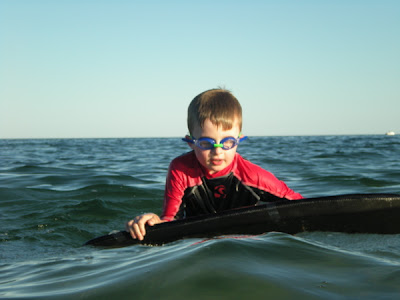 According to Frost the best thing at Port Julia was "probably crab fishing". More on that later.
Posted by Shannon at 8:36 PM 1 comment: