The kids and I were walking to the playground this evening and stopped to check for mushrooms under a nearby evergreen. It seems to be the place they grow in fall and I was hoping to find a specimen for my mushroom ID class tomorrow night.
After charging in vain through the cottonwoods last month, we were all shocked, delighted, stunned - to find a crop of morels growing there. We picked them all - Frost and Wren fighting over "the big one" Frost found - and plan to eat them for breakfast!
Our first morels! I can now add these to the chanterelles, matsutake and shaggy lepiotas I can find and eat all by myself. 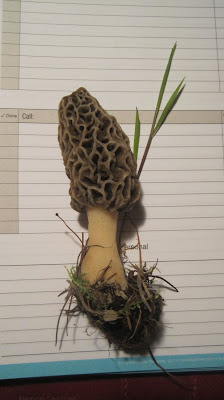 One of the smaller fresher specimens 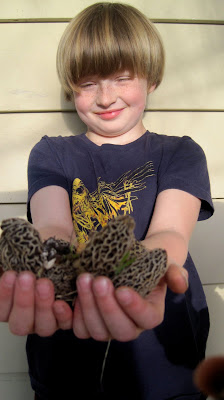 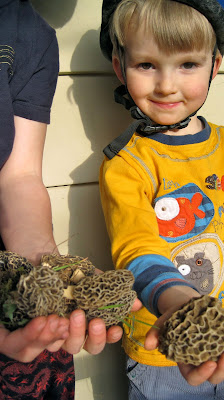 Wren, excited because we are
and wanting whatever is most desired.
Posted by Shannon at 2:56 PM 1 comment:

Since we started sleeping with our bedroom doors shut, we have been getting at least an hour more sleep every morning. I discovered that Kitty Haiku had been waking the kids with stepping and mewing.
Now, Frost is the first to get up and I hear him clattering around in the kitchen making strange breakfasts which are more to his liking than those I provide. Recently, he has been eating humous and Mary's Gone Crackers for breakfast followed up by ovaltine in milk. Other days, he has toast and honey WITH NO BUTTER, rice crackers and peanut butter or a peanut-butter banana.
This morning I came in to find him dipping biscotti in a cup of Chamomile tea with milk.
"I made my own tea." he said.
"Great" I said. "I guess you wanted a biscotti?" [We made them last night at his request]
"I had a hard time figuring out how to make tea," he added, not yet done "until I discovered that there are instructions on the tea box."
"You needed instructions?" To me, brewing tea is a self evident process much like adding milk to cereal.
"Yes, first I thought I should pour boiling water in a cup and then dip the teabag in up and down and up and down. Then I thought I should put the teabag in the teakettle and turn it on to boil it. Then when I'd pour it out it would be tea."
"No, don't do that!"
"But then I found the instructions. It says: 'BRING WATER TO A BOIL. POUR OVER TEA BAG, STEEPING 4-5 MINUTES FOR THE FLAVOR TO UNFOLD COMPLETELY'. So I did that."
He finished his mug of tea with a flourish. Well satisfied.
"You did very well. Now that you like to make tea you can choose any one of my teas in the cupboard. There is Earl Grey, English Breakfast, Green Tea, Mint. You make them all the same way. Or you can use my little teapot to brew in."
"CAFFEINE!"
"Yes, they have a bit of caffeine but that's okay"
Frost is enamored of the idea of drinking coffee, because, much like alcohol, it is a forbidden and unknown substance. I buy him the occasional green-tea latte from Starbucks and he feels The Man.
Posted by Shannon at 1:55 AM No comments:

You tell them its for fun

DISCLAIMER: This is a rant.
You tell them its for fun. They're on a team. Its not about who wins or loses.
But there you are on a Sunday afternoon, in a freezing wind, cowering on the sidelines and biting your tongue to stop yourself yelling instructions to your poor 8-year old who is playing soccer against boys, who, unless they are from some other branch of the hominid line, are clearly some years past 8 candles on the cake.
What am I saying? These kids don't have candles! They have daggers stabbed into a block of ice carved in the likeness of my son. They sleep with aphorisms like "shoot for goal from the half-way line" and "There is NOTHING in front of you but your fears" which is why they run right through, into and over my son who is looking a bit aimless in his new red soccer shoes and sounders pants.
So, we get one goal. Its in the first 10 seconds as the other team is still muddled. This is the only goal we get. The oversize team gets 8 goals. We make some good plays but
"the bad team" [as Wren calls them] just kicks through.
Three of our players sub-out crying.
Frost says "I feel bad. I feel disappointed. We got one goal and then we didn't get any more. And they were kind of big."
"Big fuckers." I want to add. " They were big fuckers." But most of all I judge their parents. Do they enjoy sending in their soccer ninja's to crush the ego's of small boys? Is it about competition? Money? God? Is it a small-penis thing?
I really want to know what club you have to join to get your kid on a soccer team that wins. Not all the time. Honestly, I am Not That Parent. However, in 3 years of playing soccer Frost's teams (no, not the same team) has seldom (if ever) won a game.
I think we may have drawn occasionally.
Josh can correct me as when things are going swimmingly and we are All Having Fun, I don't keep score. It doesn't matter.
"If I play soccer more seriously will there be a trophy?" Frost asks.
"Yes, I think they have trophies in some leagues." I say. But I am dismayed.
I ran the line I heard his coach tell the team at the beginning "This is for you to have fun playing and get some practice. Get out there and have fun."
Frost is not buying it. "I had fun kinda. It was fun playing soccer. But it was not fun getting creamed."
I guess this is where I should rise above my irritation and say something big and wise like "eventually you'll be bigger than someone else" or "they probably practice every day and aren't allowed video games."
But I don't. I can't stomach the optimism.
Instead, to offset the tone of this rant I shall leave you with some stolen phrases you may chose to use if your child is mis-matched in a sporting endeavor and seems to care about it:

1. "You don't have to be perfect. Effort and improvement are important."

2. "You are a valuable part of the team"

3. "It is okay to make a mistake, we all do. What do you think you learned from it?"

6. "I'll bet by next year you will be able to handle [them], you just need to grow a little"

7. "I know you are disappointed that you didn't win, but you'll do better next time."

Posted by Shannon at 1:58 PM No comments: