Sledding and Staying In

Seattle has shut down for snow, again.  Schools are closed, classes are canceled, bus routes are halved and North end shops are inundated with shoppers in 4-wheel drives loading up huge carts of food for Thanksgiving.

Meanwhile, we were up at 7am and managed to stare out at the delicious sunny minus 8 degree (C or 18F) day for about 2 hours.  By 9.30am we were heading up to Dahl Field for some sledding.

I am hoping to make a little movie of some our of snow moments and photos when Blogger lets me upload them.

Otherwise, all is well.  We are enjoying the slow pace and having everyone home since Josh didn't go in to work either after his horrendous Monday evening commute which took almost 2 hours to get home.
Posted by Shannon at 4:29 PM No comments:

Snow brings a strange luminescence to the landscape, a grey and diffuse light brighter than the usual winter morning.  After being woken too early by an automated message from the Seattle Public Schools to tell me that conferences will run as usual but middle schools will start late due to snow, Wren and I sat and looked out the window.

It was already snowing hard.  Here are the pictures from the window around 7.30am and an hour and a half later.  The snow has now changed to a smaller flake but its still accumulating.


We have been enjoying feeding the birds on the deck by the kitchen.  They are probably finding it hard to find food elsewhere and the juncos and little wagtails have visited a few times.

Frost and Alex are out in the snow at his house at Greenlake.  As usual with the first snow,  Wren has outgrown his snowsuit, lost his snow gloves and complained he was unable to bend over or move his legs in it.  We shall have to buy a new one.

We have Frost's parent-teacher conference this morning and I am not sure whether its ok to drive the van to capital hill or whether I should do a few trips and drop Josh at work in the Subaru. 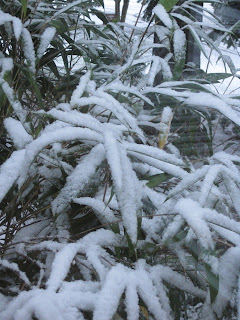 Posted by Shannon at 3:01 AM No comments:

This morning our breakfast was accompanied by a loud rhythmic thudding from our next-door neighbor who was splitting huge logs of timber for firewood.

Its getting cold.   The morning paper said "Its Fall but this weekend its going to be Winter."   Temperatures, which have been around 50F ( 10 C) have suddenly fallen and today was around 40F (5C) and dropping to freezing.   According to local experts, icy air is coming down through the Fraser Valley from the arctic.  It sure feels like it.

The freezes of winter typically mark the end of mushroom season so I thought today was a last chance to explore some local forests and see what remained.   We were in luck and caught a few late chanterelles, a big bag of clitocybe nuda (Blewitts) and a large flush of chlorophyllum rachodes (Shaggy parasols).

Chris and Pascal came with me and we might still be in the woods but for the kids who were either silently resigned (their kids) or loudly anxious and WANTING TO GO HOME (Wren).

After lunch, Frost's soccer team met for the last game of the season.  It was a social between parents and kids followed by pizza at Pagliacci.  We were very luck with our soccer team this season.  It was well run and coached and supported by organized experienced parents.

They presented the coach with a gift and each player received a trophy with a photograph of themselves in action.

Here is Frost receiving his trophy.  The announcement read:  To Frost who was never gloomy and always enthusiastic.

Wren hopes to have a trophy too one day.  He asked Frost if the trophy could be in his room but it is now on the mantlepiece.
Posted by Shannon at 12:10 PM 1 comment: