Sorry I haven't posted recently. Things seem to have been a bit hectic at home. We are in a rut of Frost-playdate-strut-eat-candy-draw-limits-Wren-yelling-cook-dinner-playduplo etc.

I am a bit frustrated by it.

However, I have just spent 20 minutes sampling coffee with the Zoka staff and I am feeling better. Its very like wine tasting. I learned all about the beans and how they are prepared. Then I learned how to inhale the freshly prepared espresso from a spoon. You have to slurp it very noisily into your mouth to aerosolize it without it hitting the back of your throat. Then you spit it out into a cup. Some coffees were very smoky, others were sour. It was quite informative. I feel gratified to have had this experience - if I come away with two new obsessions from my time in Seattle it would be appropriate that they are mycology and coffee.

I think as a parent you have to have an activity, a life beyond the needs of kids even if it is something you share with them like birdwatching or mushrooms. It needs to be something you really like for itself not because it keeps the children happy/educate/out of your way.

Along these lines, tomorrow we are going to the farmer's market to buy a shiitake mushroom log (and leeks, coriander, potatoes, etc). Its not really a log. Its a a compressed stump like thing innoculated with shiitake spores. I have told Frost that if he buys the log I will buy shiitake from him - for $4 a punnet. I think he is interested in them growing but not in eating them.

Wren is quite excited by our plan to buy chickens to live in the garden. He loves the neighborhood chickens (there are 3 coops we visit). We are going out to Stanwood to buy a coop on Sunday afternoon and chickens will follow. We will be looking for a house-sitter if we go on Vacation - to watch 2 cats and 2 chickens!

Tomorrow we are going snow tubing at the Snoqualmie Summit. Frost is very excited but Wren is just worried. He is quite anxious at the moment - in particular he hates his snow coat, the thought that I might give him a bath or the idea I may wash his hair.
Posted by Shannon at 5:08 AM No comments:

Every now and then I come across a kids book that makes me flinch. Sometimes its easy to put it aside and say "this is not for me" [like that book Mum gave us about how nice Polite Elephants Behave. All the badly behaved elephants were my kid]. But its not always as clearcut. Some contemporary classics of the children's books scene have me going "what?" and either rephrasing or being left with some puzzlement. Here are the best of the best:

The Rainbow Fish
This is a little story about a beautiful shiny scaled fish that lives under the sea. For some reason unexplained in the story, this fish has lost its school and is living with a different species of fish. The fish in the neighborhood covet its pretty scales but it doesn't want to wrench off parts of its body so they refuse to play with it. In its loneliness it seeks the counsel of wise underwater creatures who counsel it to rip off its most lovely scales and give them to the different species of fish. These fish manage to incorporate the DNA and look pretty. Once they look the same they let him play and everyone is 'happy' [aka, the same]. As the author, Marcus Pfister, puts it:

Soon all the fish came, and the Rainbow Fish gave away his scales, one by one. Finally he had only one shining scale left. But now, as he swam off to play with his friends, he was the happiest fish in the sea.

Friends? Give me another. I guess this means you have to give of yourself until you reach the lowest common denominator. God forbid he gave away the last scale and was shiny-scale-less while his 'friends' had one. Who knows what would have happened then.

I hate this book.

The Runaway Bunny - Margaret Wise-Brown
This is a classic American storybook. The story is beautiful and had sweet and witty pictures of a little bunny trying to develop his independence despite his mother's inability to separate and give him any space. This woman needs a life! Her possessiveness doesn't emerge straight away. At first you think that she is just being loving but after a while the malevolent stalker version emerges:

"If you become a fish in a trout stream," said his mother, "I will become a fisherman and I will fish for you." [illustrated with a tiny bunny swimming towards a hook baited with a carrot]

Hello? What happens when a fish takes a lure? The real clincher of the book is when the bunny tries tranmutation into a sailboat:

"If you become a tree," said the little bunny,
"I will become a little sailboat, and I will sail away from you."

"If you become a sailboat and sail away from me,"
said his mother, "I will become the wind
and blow you where I want you to go."

There, she lays it all out. Its about getting the baby bunny to do what she wants and stay with her forever. There is one word for that "Therapy" [his or hers]. I always change the words on that page at least to "blow you where you want to go."

We're Going on a Bear Hunt - Michael Rosen and Helen Oxenbury
I love this book, really, but it puzzles me. Its clearly written in England or some other country in which bears are more mythical and less real-big-dangerous-animal because its not really so amusing to stalk a grizzly bear and have it chase you home into your house and maul your door. That's not what I hold against it. My problem is that its in that class of kids book in which the family relationships are blurred. I bet there is some child psychologist out there who will tell you that kids don't need as much clarity as us adults, that they are more concerned with family dynamic and the role of the kids but as the reader it bugs me.

There is a dad and a toddler who is carried and two smaller siblings who could be twins (boy, girl) but then there is this inbetween girl. Is she a kind of teen mother or a teenage elder sister? I am always trying to figure this out. On page 2 she looks like a child (small nose) compared to dad (large nose) but when they cross the river she looks like an adult. She helps the kids take off their shoes while Dad just sits like a lump and contemplates the mud but then she reverts to a child in the forest scene. She hugs Dad at the cave entrance with some ambiguity and when they rush home to bed there is no mum and she looks quite old again. ARGH.

Along these lines is Max and Ruby by Rosemary Wells in which the bunnies seem to live alone without interference of parents or Child Protective Services. What happened to their parents? Were they eaten by a rhino? And why is Granny living up the road if there are no parents? I really feel for Ruby forced to bring up her younger brother who so clearly has issues already.

General News
Now that I have got that out of my system, we are all well. I am still upset by the awful situation in Victoria, Australia. However we are doing ok. The shots went smoothly yesterday despite a lot of apprehension when the nurse arrived (crying) and little apparent benefit from the Emla. I shall be checking the dose and application with the doctor.

The good news is that Wren has gained 13 ounces in one month. Of course my first thought was swelling but he has no edema and looks healthy. That may mean he is doing ok heart-wise. It is certainly not a bad sign! I have noticed that he has grown a lot recently because I have started to put the side of the crib down before taking him out and letting him climb into his carseat alone.

Frost is also well but was in trouble tonight when he was caught lying to Joshua about sneaking candy from the cupboard. I have been trying to cut back candy to weekends only but he resists. He has started to play Josh and I off against each other, play dumb when it suits him and create untruths or half-truths which he almost makes himself believe. He was punished by receiving no desert and a stern talking-to.

Labels: children's books that bug me. 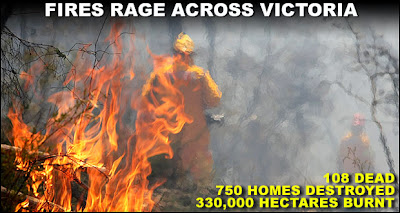 My mother has started a blog about her life in the Adelaide Hills of SE Australia. There has been an awful heatwave in SE Australia with temperatures at their home of up to 114 degrees and 117 degrees in Victoria. Local wildlife (koala and birds) have been suffering and she sent out some pictures of a few koala they have helped or even saved by putting out birdbaths of water.

The latest news is that the heatwave has lead to a terrible outbreak of fires in the next state. I lived in Melbourne for a number of years (and it was where I found out I was pregnant with Frost) and I recall times when we had fires in the Dandenongs (hills outside the city). Fires are very hard on people and animals and we we can only hope they are brought under control soon. 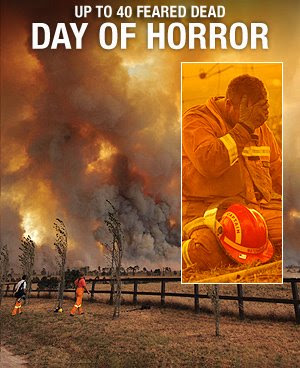 Check out Mum's Blog if you want to hear about life in the Adelaide Hills. Here is a preview picture she took of a mother and baby koala drinking at the birdbath. It is very rare to see a koala drink as they usually receive all their moisture from leaves and dew. 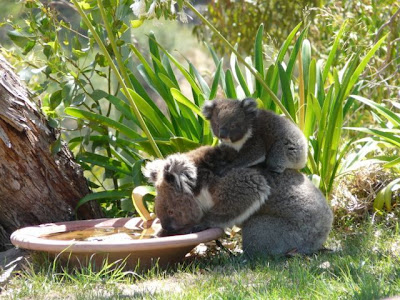 Update
It is now thought that up to 200 people may have died in the fires. The count is currently at 108 and fires are still burning.
Posted by Shannon at 2:05 AM No comments: