Posted by Shannon at 6:29 PM No comments:

Visiting Wren in Seattle in August 2016 by Granny

Wren is nine years old now, or as he says, nine and three-quarters. He will be ten in December.
My visit coincided with the ending of the long summer vacation: from late June to early September. It is a challenge for working parents - for all parents. I think by the end everyone is keen to start the new school year. 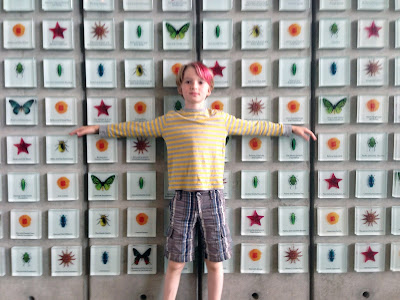 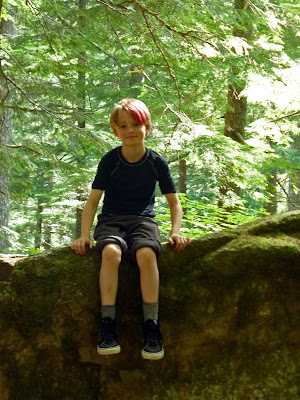 Wren is going into year 4, and Frost into his Sophomore year at High School. For non-USA people this is the second year at High School, 10th grade. I looked up the meaning and read that it may originate in the Greek word, sophisma, meaning, 'acquired skill, clever device, method'. Apparently, it is the beginning of the time for schoolkids to consider what they hope for in terms of their college years.

I look back on my three weeks in and understand why, now back in , I am somewhat tired. We did a lot every day. My new Fit Bit HR charge (thanks to Shannon) shows many stars for my activity while there … not so since my return to .
The late summer weather was stunning: the rain for which Seattle is infamous came in one hard shower in three weeks and I spent a lot of time watering the garden and trying to save Shannon's mimosa tree and Josh's vegetable garden from collapse.
Every weekend saw us in the 'woods'. The forests of are so different to our Australian eucalypts woodlands. The first weekend we went to on to walk and look for fungi - but found few in the dry conditions. There were enough Chanterelles for family breakfast but says we need to wait for the autumn rains for the bumper crop.


Wren is a keen walker - chatting always and wondering how much further it is. Although Wren is super thin he has great energy. We collected nettles for soup and walked to a beach where another group of foragers were crabbing. They showed us their huge mud crabs and butter clams they had gathered using licensed pots. Our long loop walk took us through great trees over 500 years old. Some were Douglas firs, spruce, big Maple Leaf and others that all looked the same to me. found woody mushrooms that turned out to be good for the dying of materials. We saw the large pileated woodpecker flying through and it briefly stopped on a tree. I glimpsed an Osprey.
Wren is a thinker and expresses himself very well. Often these thoughts come out of the blue from the back seat of the car.
'We have just passed a graveyard, and I am just wondering. Why do people put flowers on a grave? How did that originate?' Shannon replied by telling Wren about and their customs relating to the old people.
Another question had Shannon and me collapsing into laughter:  'When should I young to worry about saving for retirement?'
Other ones: 'What happens if Trump and get the same number of votes?' and 'What temperature do you get with yellow fever?'
And this comment when walking back from Greenlake Pool: 'You have to face some difficulties in life. You cannot expect everything to go well.'
Wren gets obsessions - shoes he desires or something from the supermarket and will not rest till he gets it or some commitment. He wanted Vans shoes and was sad till they were ordered. He anticipated their arrival and was miserable when he struggled to deal with the long laces. I had taught him to do his own laces earlier. It's hard growing up sometimes.
Wren gets worried about the world: will Frost get lost in when he is allowed off on his own to wander for a few hours? He picks up on adult worries:  are we going to miss the plane? He likes certainty.

Posted by Shannon at 6:29 PM No comments: