When bad things happened my grandfather used to say "worse things happen at sea".  I am not sure exactly what he meant by it - I assume that anything bad that happens on land is a lot worse when you're out in the middle of a roiling ocean, reliant on your own supplies and resourcefulness. Regardless, its function was to give us perspective on petty complaints. After this trip I am adding a new adage to my collection of Life Quotes:

Noah and I decided to See the Sunrise at Zabriskie Point. Our sun can be seen to rise and shine from many part of the earth (and I saw a spectacular sunrise through my tent flap the day before). But some parts of the earth have better views of it than others and some parts of earth in National Parks have the misfortune of being accessible to the nation, and being known for this.. this ability to see the sunrise with the same framing everybody else has seen, and also to be able to prove it with a photograph.

I didn't know it, but according to reviews (yes, view sites have reviews on Google):

So, instead of a few folk sitting on a high place watching the suns rays reaching over the curve of the earth, there were dozens of people with tripods vying to get front row seats to photograph the reddening canyons from an iconic vantage.  It was like this about an hour before sunrise. 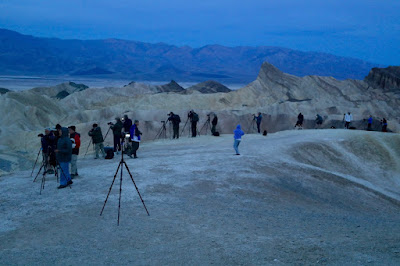 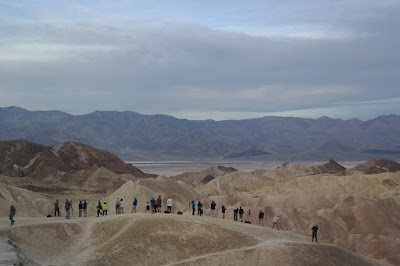 They jostled for position, ran from vantage to vantage. This guy asked us to "step back a bit" so he could get his desired angle.  He's in the Khaki brigade. When you go to a national park you must wear khaki pants and a kit vest. Do you love him? 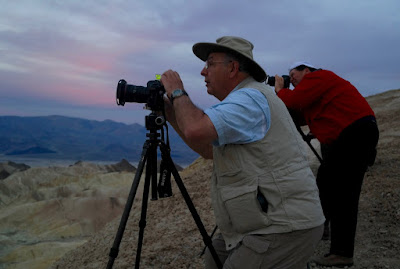 And then things got beyond crowded to weird. A TV-style yogi was doing some kind of sun honoring thing with a boombox playing inspirational pop music, loudly, nearby. So, picture this photo with a tinny pop soundtrack.  Oh. And a Japanese-American woman in a white silken tunic prancing around making sun honoring gestures with her hands followed by an entourage of older male tourists. A homophobic man with a bloody eye told me that he and his "boys" got in trouble riding Harley's, and did not do "stuff like that". 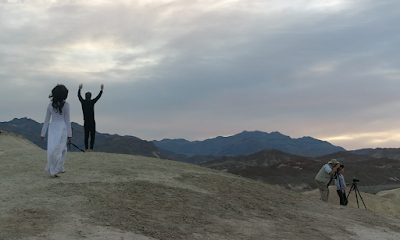 A little note which made Tunic Lady seem more calculated was her sneakers.  She was wearing clunky old-person sneakers but she'd slip off before doing her 'barefoot in the sand' dancing and prancing and then put them on to walk around.  Men turned and photographed her, gesturing her over to pose in the foreground of their sunrise.

There were also people camped with cameras like little black pimples on distant buttes ;)

The irony of it all was that the sunrise was not particularly saturated and colored that day as there was a veil of clouds.  I overheard the yoga guy tell someone that "it isn't as intense" as yesterday. I took some photos (but really need to read the manual on my camera as I spent about half the time dicking around with settings).  When I opened the pictures in my photo viewer I started to think about intensity.  Are people hooked on a saturated version of the world, like the "Pop" filter on apps?  Do you slip the intensity slider a little to the right?  And if you do.. what are you moving towards... does the brighter version seem truer, more fun or just more like the life people will Like?


"I saw more clearly than I have ever seen before or since the minute detail of the grasses, the clusters of sand shifting in the wind, the small flotsam of the forest, the motion of the high clouds streaming above the peaks. There are no words to convey the moods of those moments.”

Don't get me wrong, I am glad people get out to National Parks but what I hope they find there is an experience of the minute detail of things, the humility of breath in the great sweep of the earth.  This was not that moment.

Posted by Shannon at 6:00 AM No comments:

I don't like New Year's Resolutions. If something is worth doing, just do it already.. don't wait for the ball at Times Square to tell you its time. So this year, when someone asked what my resolution was I just said I was going "to go to three new hot springs". I am not sure why I said it, I guess because it was cold, in the middle of winter, I like Breitenbush Hot Springs and of course I enjoy Korean bath houses like Olympus.

Last week I made a trip down to California and Nevada with Noah, and visited 3 hot springs in two days so perhaps I was prescient in my ambitions.

We started off in Sacramento and drove Route 50 East and 395 South to Bridgeport CA. The drive through the Sierra's was beautiful. It reminded me of great scenic vistas I've experienced - the view across the foothills to the Drakensberg, the high plains and the hills of the Black Sea.  The scale of the mountains covered in evergreen trees, patches of high meadow white with snow and sudden cuts of rivers carrying snowmelt merits a kind of silence. Its enough to simply be in places like this.  For those not in the US, the Sierra Nevada range is the highest and longest mountain range in the contiguous United States and includes Yosemite National Park as well as many others. 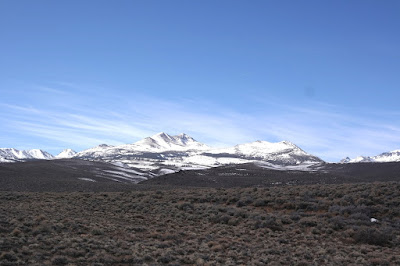 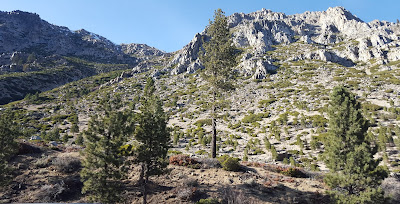 Travertine Hot Springs
We dropped down from the mountains to a wide valley and then turned South to Bridgeport. Bridgeport is really tiny but its near Travertine Hot Springs which is a natural spring up a mile of dirt road. We arrived at dusk - surprising a jackrabbit in the headlights - and came to a landscape of large boulders and low trees, with warm water seeping from the earth and running down the hill in muddy rivulets and bogs.  There are a few large central pools and in a few places, people have cultivated others. We found a pool down the hillside. The night was brilliant with stars.

As I walked back to the car a large animal lurched out of the dark to sniff me.  It was a hippy's dog. Apparently hot springs attract people who are relaxed and live in camper vans and travel with dogs and children who wear colorful clothes and hats.  Because it was dark, I don't have a photo of this Spring but Noah has a photo of the hare and the sky looked like it does from any dark-enough North American earth.

We walked back without lights.  Noah says the trick to walking in the dark is to lift your feet up so you don't kick into things.

Mono Lake
The next day we headed South through the great basin. Mono Lake is a saline soda lake (very salty and alkaline) which forms an oasis, important for migratory and nesting birds. This is not a hot spring but its beautiful and watery so I am including it. We ate lunch at the lake shore and then walked through the towers of tufa which stand like sentinels (or meerkats). 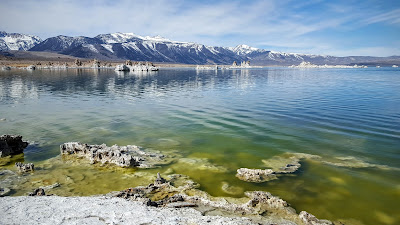 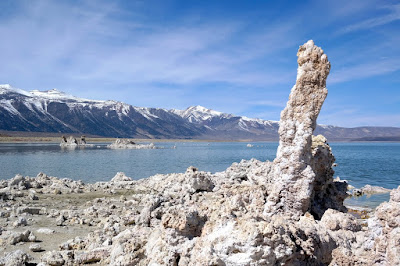 South to Wild Willy's Hot Spring
This spring was a few miles and cattle-grates off 395, South of Mammoth Lakes.  Located under a great sweeping horizon on a ridge above the valley floor, the cold wind peels off the mountains but the sun and water are hot.  You walk from a parking lot down a path and wooden walkway to a series of pools. On the way we passed an unnaturally happy man carrying a six-pack of empty beer bottles and alcohol.  More dogs were hanging around and a vacant-eyed young woman walked by, expressionless.

The upper pool was a bit milky but a nice temperature.  We had it to ourselves but other people were hopping in and out of the main pools with drinks and children and dogs and communal cheer. As I got out I found an alcohol swab of the kind people use to prep a site for injectables. This was not encouraging and gave rise to "fucking hippy drug user" thoughts in both of us.  Perhaps the sign should add "pack your sharps".

The final spring we visited was Hilltop. There were three women in bikinis and 2 naked dogs at Hilltop Hot Spring when we arrived. The dogs were friendly. The women were locals.  They were not hippies or drug users but its not that fun to sit in a Spring the Size of the hot tub with three strangers eating crackers.

At Hilltop I learned that one of the women was eating crackers and cookies and chips because she wasn't getting any orgasms.  I also learned that they had been sitting in the hot spring a few weeks prior when they felt an earthquake.  I also learned they were locals and came here often. Noah declined to get in that hot spring which was a wise decision and enabled me to hop out within a short period and say I was ready for lunch (I find I am always ready for lunch in these circumstances).
Posted by Shannon at 11:55 AM No comments: