Do the birds speak Spanish?

This morning I took Wren to the zoo. Lately, he has tired of watching Diego but one of the last episodes he watched was about rescuing orphaned raptors in a lush rainforest. When the birds were old enough to be released they were taught to 'migrate' with a song and exhortation in Spanish. Wren has watched this episode a couple of times.
At the zoo, he usually enjoys seeing the raptors on display on their perches. As we were passing we saw a docent bringing out a falcon.
"WHAT IS THAT BIRD" Wren shouted over the conversation with some kids in the front row.
"It is a peregrine falcon" replied the docent, who we later learned was a Burt.
"Does the birds speak Spanish?" asked Wren, with authority.
The docent did not know how to reply to that and carried on explaining that the bird used to live on the West Seattle bridge but was injured in a territorial battle with another falcon. Apparently, there are only 6 or 7 breeding pairs of peregrines in Seattle even though there are enough pigeons to feed many more. The birds are aggressively territorial and will nest of protected ledges in the city. There are a 'famous' pair who have nested on the WaMu tower for many years, watched by tweeters and researchers.
When I explained that Wren had seen falcons in Diego and those falcons spoke spanish AND that we liked birdwatching at "The Fill," Burt suggested we check out the tweeter website where NW birders report sightings and birdlists from around Seattle. I am not sure which Tweeters he meant as there seem to be a multitude. I shall do more research after I get some sleep.
Also at the Zoo we saw the hippos out the water, weaver birds with their nests, bears eating meat and nannies losing their wards.
Wren ate a soft pretzel with too much salt and rolled pennies down the money pit.
It was a good visit.
Note
I am sorry I am doing so poorly with updating the blog. Preparing a resume and doing job research has taken a lot of my time. Coupled with that I am in a medically intensive period myself. I am seeing a PT twice a week to get to the bottom of the neck problems I had a month ago (and a year ago). I am also due for a full skin-check after the skin cancer that was burned off my collarbone area last month. PLUS, I have to go for an abdominal u/s to "follow-up" on a cyst that was seen on the CAT scan I had as part of my Great Unable To Eat disease a few months ago.
I am not 'sick' but I have a sudden rush of medical appointments which are a real nuisance as they must occur in my non-Wren time which is my only real time for job-search and blogging.
They should be over by the end of next week and I will be able to socialize and run and volunteer at Frost's school and read up on International Public Health and Halloween Crafts and Beginning Marimba skills etcetera.
Posted by Shannon at 3:00 PM No comments:

Frost came home from school and told me he has a test on Polygons tomorrow.
I said "isn't that on Friday?"
"It IS Friday tomorrow," he explained.
"No," I said, "Its THURSDAY tomorrow."
"Well, then we had two Wednesday's" he said, puzzled.
"Oh, you think?" I teased. "You just thought...."
Then the penny dropped. It is Thursday. He has a test tomorrow! This means that we have to review the whole worksheet to differentiate various polygons based on sides and angles. It seems that many of the kids had covered some of these features last year and are building on it. Frost is struggling to work on the many concepts from scratch and to remember (and spell) the words.
I will be enjoying this weekend as much as him for what it offers by way of escape from homework.
Frost is planning to DECORATE THE HOUSE FOR HALLOWEEN - a much anticipated and beloved event.
Wren had a fun first full session at preschool. I was there with him and he was incredibly happy and sweet. At one point during the day he said he would like a cookie to "put in my throat and eat up."
He was very tired at bedtime because the afternoon preschool time means he misses nap on Thursdays.
I will be submitting my second job application tomorrow and will have the weekend off to enjoy reading books instead of crafting resumes.
Posted by Shannon at 2:48 PM No comments:

Yesterday Frost had his first playdate with a new school friend. His friend is called Carter and he and Frost eat lunch together and play basketball at recess. Frost says he is good at soccer but Carter is good at basketball.
The playdate was at Carter's house and it went well - they had icecream, played Lego and looked at Pokemon cards. Carter's family moved from Amsterdam to the US a bit over a year ago and so they are still in the instability of immigration (even though they seem to have little to no accent) which must be hard. They seemed charming and Carter was bright eyed and attentive which made Frost seem like a bouncy bunny talking all the time. Sigh. Whenever Frost is anxious or meets new people he gets frantic and talks all the time and I start to reach for explanations and excuses about why my child is such a lunatic.
Have you ever felt embarrassed about your kid in front of other adults? I just seem to feel that a lot recently as we move into a new community and I am doing my nice "getting to know you" behavior he seems to be at his most uncomfortably bouncy and out of step with me.
Last night I spoke with his teacher about his handwriting. Coming from KapKa we had an idea that Frost struggled to produce PRODUCT. Still, the burden of writing is large at his new school - everything from Math to Reading to Social Science is centered around writing your thoughts down or explaining your observations. Frost struggles to keep up with these and it is affecting his ability to do the homework. He is very self critical - saying "I suck", "I am no good at this" and "everyone else writes 7 sentences while I write 1 line."
His teacher suggested the following strategies:
1) Try to start him on cursive. Cursive is going to be taught over the whole year, this might give him a chance to be ahead and learn his letters correctly from the start, doing practice ahead of the class rather than feeling behind.
2) WRiting in a wider lined composition book (they have fine ruled books).
3) Allowing dictation for answers to math worksheets and additional practice writing from a workbook.
4) Correcting his errors in mixing case, starting from the line etc.
5) Encouraging lists and shorter sentences to continue to "get his ideas out" in writers workshop.
6) IF practice and support aren't working within 2 months, refer him to a SIT evaluation with an OT present. This is a special evaluation team which would identify the problem and then assign someone to work with him 2 times a week to give him special intervention on writing. We hope he won't need this.
My Dad tells a story of how he was almost held back to repeat Kindergarten because his handwriting was so bad. My granny had to go and argue (advocate in today's parlance) with the teachers to get him a PASS. My dad is very clever and I hope it is just a sign of our family writing disability coming through. Josh also had terrible handwriting (he says) and mine was awfully messy and always full of red ink on tests (but I blame that on having to write italic font with a messy fountain pen. Who would credit it!).
Got to run home now. Wish me luck with Job Application #2 going in tomorrow.
Posted by Shannon at 8:47 AM No comments:

Its ironic that when you have most to write about there is the least amount of time available to do it. We have been busy. On Saturday we drove down to Longview for Josh's nephew's first birthday. We are not the sort to whiz of to every first birthday around but we hadn't seen his family so for long that it was a de fact reunion. Everyone seems well - The Cousins are huge and pre-teen and Frost appeared equally giant to them. We ate pizza and watched Leighton (1) squish his fingers into his own finger-squishing cake. I think it was an event designed to generate cute photos and it did the job!

To avoid two long drives in one day we decided to stay Saturday night at Great Wolf Lodge in Grand Mound which we had heard described as a hotel with a water-park attached. It was far more than that. Our neighbors describe it as Vegas for Kids which captures the hyper and spectacular nature of the place. Frost's favorite feature of our stay was Magicquest - a live action role-playing game set up around the hotel. You buy a wand and then check in at various central quest kiosks to set out on a quest. The quest involves waving your wand at certain specified objects around the hotel - a great old red chest, an owl, a cave with a pixie in it. The wand and objects are interactive, chests open to reveal glowing crystals, pictures shimmer and speak, everything twinkles and emits a great deal of noise.
I shall post more about our visit to Great Wolf in another post. For local friends and family, here are some pictures from Leighton's party (I don't know how we missed a picture of the girls, Nana Katie and Great Granny Charlotte. Oh, seeing Nana Katie Josh said "what? You are my Granny? She looks too young. And [to me] you look OLD": 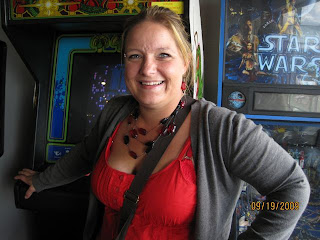 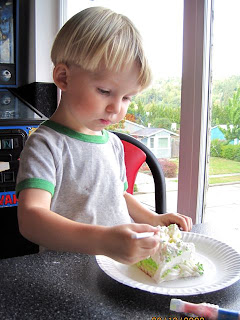 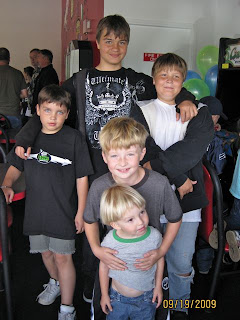 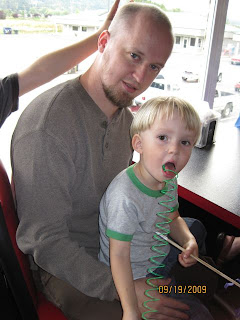 Wren interacting with a party favor.
I will accept caption nominations for this one. 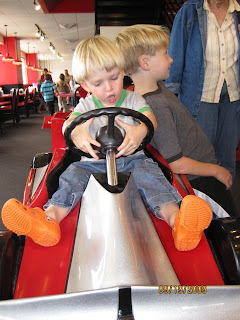 Frost wanted a go on the car too but he was too big. 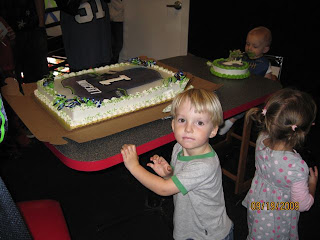 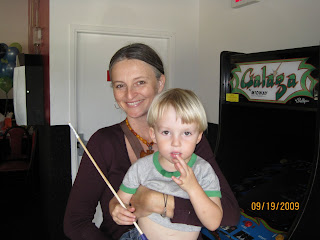 Wren and I
Posted by Shannon at 5:38 AM No comments: