Here are the kids on the front of the folks' 4WD. This was taken on Kangaroo Island. The kangaroo bar is the big silver thing and the lights are extra bright. Its a diesel engine and can travel for 1000km without needing gas because it has two tanks. 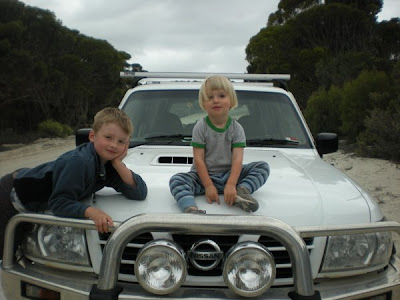 Posted by Shannon at 6:01 PM No comments:

When Pelicans (do not really) Attack!!!

At the jetty in Kingscote, KI, the kids were impressed to see a flock of pelicans close to the jetty. The pelicans are fed by local fishermen and were sitting on the rocky wharf with a sense of anticipation and entitlement. As you can see from this picture, they are VERY large birds. Every morning as we walked on the beach a small flock of pelicans would fly across the water. The sea was very calm and the pelicans flew so low that their bellies skimmed the water.

Frost was excited to see how close he could get to a pelican (why do I keep typing 'penguin'?) 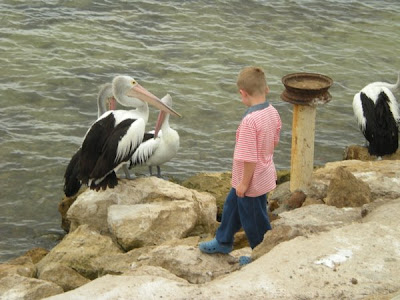 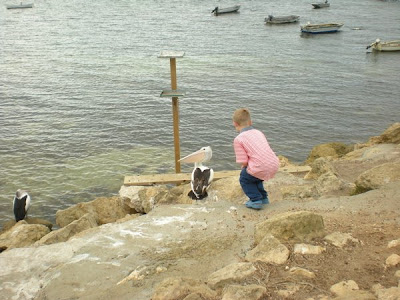 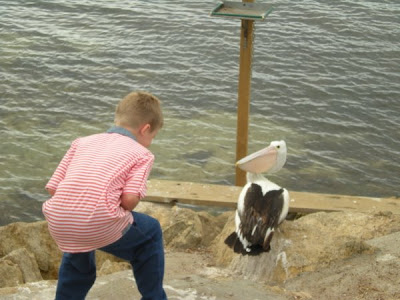 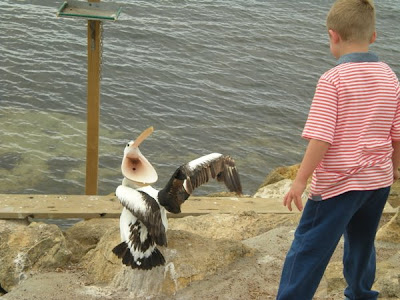 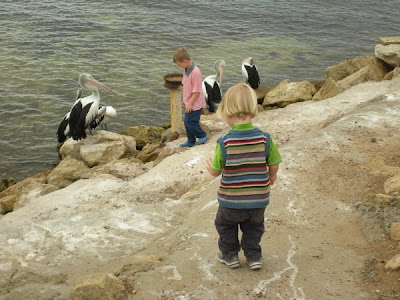 Posted by Shannon at 9:07 AM No comments:

Signs of the Times

We are back in Adelaide after a 4 day trip to Kangaroo Island. I am so overwhelmingly behind in my writing that I am going to digress with a post about some signs I have collected along the way and hope you glean some vacation stories along the way.

Children Don't Bounce
While at Port Julia we noticed these street signs which caused some confusion in the non-Australian members of the family. The sign says "SLOW DOWN, CHILDREN DONT BONCE". Frost says that the sign is written in Australian and means Children Dont Bounce rather than "don't bounce" because the apostrophe is missing. He says he doesn't know what DONT means but it must be Australian for something.

Joshua is puzzled. He thinks that it is an edict against bouncing games like ball games. Perhaps they are risky in the road? 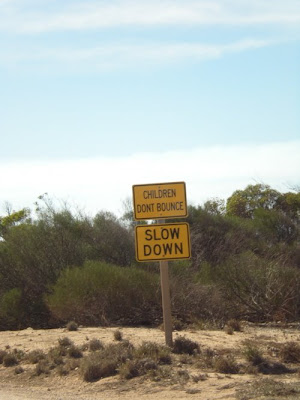 Iconic Wildlife Signs
Most tourist shops have copies of the Australian road signs urging you to watch out for native animals. Here are Frost and Wren beside a sign on Kangaroo Island warning drivers to watch for Echidnas on the road. Another reminds you that kangaroo, echidna and goannas are around. While driving on KI we saw many dead wallabies and possums on the roads and a fair number of dead crows, killed while eating carrion. We also went driving at night with the headlights on full-beam. Mum has a 4WD she has taken outback so it is equipt with extra headlights and a roo-bar to avoid and minimize damage from roo collisions. We drove very slowly and saw a number of wallabies on the roadside as well as a possum in a tree. 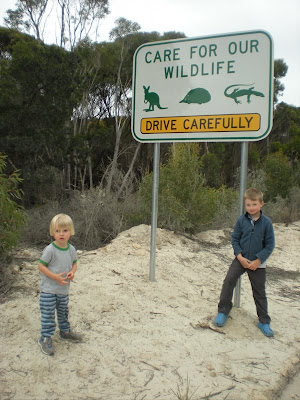 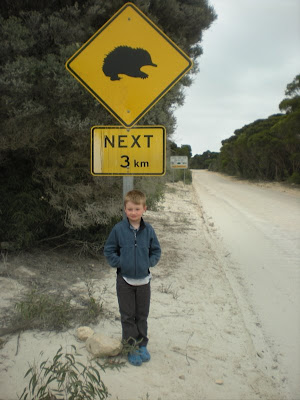 Big Machinery is Dangerous
As we were leaving Port Julia we saw a remarkable trench digging machine. It is for digging deep narrow trenches for cables and utilities in the rocky compact earth which is like concrete in places. It is not hard to believe that this is a dangerous machine to operate but I still enjoyed the graphic illustration of the danger (below). It warns MOVING DIGGING TEETH WILL KILL YOU OR CUT OFF ARM OR LEG. STAY AWAY. Wren was very interested in the machine, calling it "big digger". 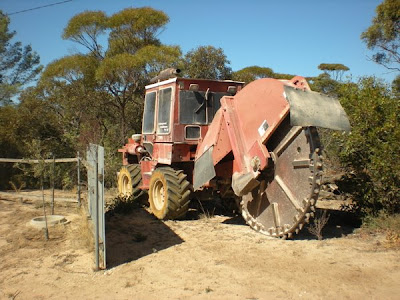 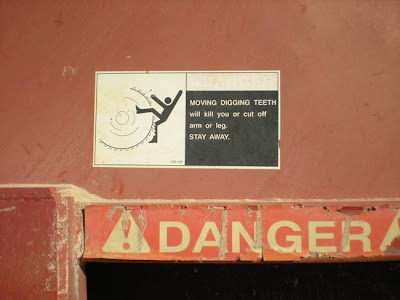 The Ligurian Bee
Kangaroo Island is home to the last outpost for the pure Ligurian bee - a species of Italian bee imported many years ago and remaining in its 'pure' form. We visited a bee farm on KI and bought some honey mead. This sign is the door to the toilet at the bee farm. When i took this picture I could hear Frost singing to himself from within. Unlike the US, everyone has signage to the TOILET displayed prominently and you stand out if you ask for "the bathroom". 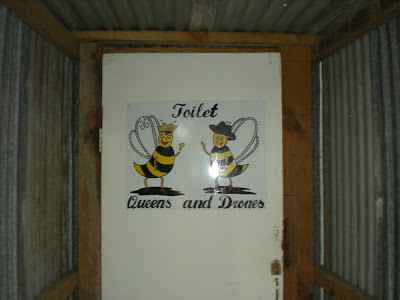 Signs of Drought
We toured around KI with Natasha (my best friend in Australia) and her partner Douglas. To give Wren a stretch we stopped at Duck Pond - advertised in this sign as a billabong oasis for wildlife, facing issues of recent salination. When we visited the prolonged drought which has hit the region bringing at least 3 winters of low rainfall has left the billabong almost dry. We saw one koala in a high river redgum and some gallahs but the only patch of water gave off a fetid stench and did not seem to be the oasis it once was. Here you see Frost at the billabong (waterhole) that was. 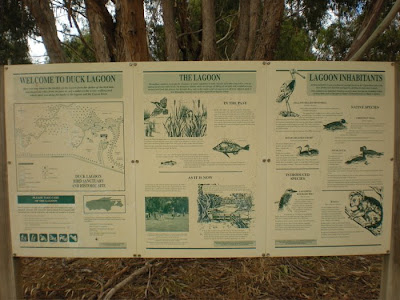 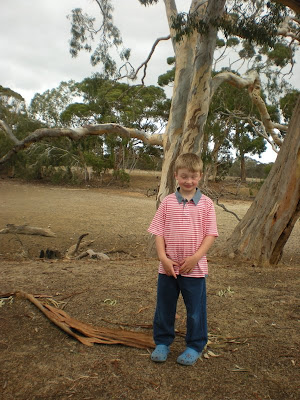 Update
We had to take Wren to the doctor today to examine a cut on his head. He was running away from me in the garden to avoid diaper change when he tripped over the garden hose and fell forward onto a low garden wall. He split his forhead and had a large egg so we took him to see a local doctor. They cleaned it up and took a look at it and said it didn't need to be taped but we should watch him for concussion.

Of course I have been neurotic all evening. It was hard to judge 'normal behaviour' because he was so exhausted after missing nap this afternoon (another story).

Josh and I had a great day - lunch out with Wren and some local shopping for delicious cheese. We made porcini risotto tonight. Frost went to tennis camp at a local Tennis Club this morning and enjoyed it a great deal. He goes again tomorrow morning.
Posted by Shannon at 2:10 PM No comments: