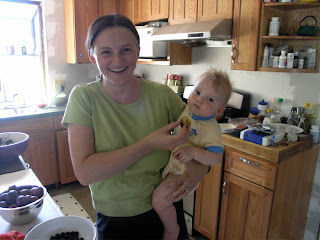 At our last pediatrician appointment I pointed out a few marks which have appeared on Wren's skin. The three smaller ones are tiny pale brown marks called cafe au lait spots. His are less than 3mm across but were not there before. The pediatrician said that was nothing to be alarmed by but if he had or grew many more they would watch for a neurological condition called neurofibromatosis. Ick.

The fourth marking was there from birth but has thickened slightly and reddens when he is hot or cold. The pediatrician said she suspected a mastocytoma and scratched it to see if it caused "hives". I have since read that this is called a Darier sign. She said that Wren's did not form a hive quickly but by the time we were home it had blistered and looked like a little weal so that is probably what it is.

Today Frost finished his last summer camp - a play of Roger the Jolly Pirate. Here are some pictures I took of the final performance in the park. Frost was "Man 1" - one of the Admiral's men. He had a single solo line to say "it is a ghost!" and said so with a flourish before running over to tell me he had seen an inch worm on a tree. 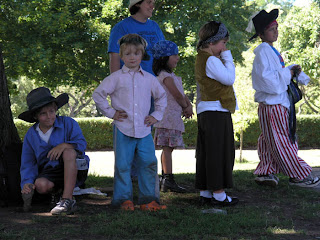 Frost and Wren on the grass at the Good shepherd center: 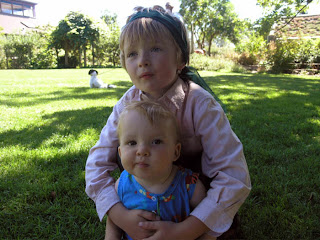 Posted by Shannon at 7:21 AM No comments:

Moving to own room

There have been a few changes and lots of moving about going on in our home this week. Natasha and Douglas are still visiting from Australia and its wonderful to have them around. I have company in the morning, people to offer me tea (made from loose leaf Harrods tea mum gave me a few visits ago) and lots of getting out and about to counter my rather repetitive and mundane habits. This evening Tash and Doug are dining at Wild Ginger (there is a bit of envy in my tone) and Doug spent some of the afternoon browsing at Elliot Bay Book company.

It is testimony to the monorail of my life that I mis-typed Elliot Baby Book company. Yeah, its all baby all of the time!

On the baby front (mis-typed as Frost) things are also afoot. Wren is pulling up on everything and just starting to take a single shuffling step along while standing up. If he wants to travel some distance along the couch or gate he sits down and crawls before standing up again. Still, the shuffling has begun and will no doubt evolve into cruising before too long.

I know I owe you pictures of this standing business but although Frost has been in camp all this week (its one about Pirates) I haven't manage to catch up on much of anything. I am more relaxed though and feel I am a much better mother. I guess my mothering know-how only extends to about 8 hours a day. If I have more than that I feel some depletion (decomposition seems a better word) and find myself tuning out and having to say "pardon?" when I have missed a conversation.

Yesterday, I moved Wren's crib into his own room (which was once Granny's room and more recently Frost's camp). Joshua moved from Frost's camp to our room and Frost moved to his new room. Wren is now sleeping in his crib in his room although I am still willing to move to the room in the wee hours until the Night Weaning plan takes effect. I have decided to give him a week in his new room before night weaning in case he has trouble adjusting.

Wren has lots of routines which he enjoys and some he doesn't. He does not like clothes changing or bathtime. He loves to stand at the base of the yellow slide in the garden with his diaper hanging low and covered in leaves and twigs, eating pebbles. Thankfully the pebbles are tiny but they keep me busy doing the mouth scoops.

Speaking of mouths - I noticed Wren had a few white spots in his mouth yesterday and fearing thrush I took him to our pediatrician. It is not thrush but he has mouth ulcers probably from a low grade virus. He had been fussy nursing which now makes sense. While there I mentioned my concerns about some skin markings Wren has. Three little brown patches less than 3mm across have emerged in the past month and he has an irregular reddish slightly raised and scaly patch to the left of his spine.

The doctor said that the brown patches are cafe au lait marks and up to 6 are okay. More than that and they can be a sign of some neurological issue I don't want to dwell on but have. She scratched the other mark and said she expected it to cause some hives if it was what she thought it was. It didn't cause hives but she still suspects its this thing which name I forget. It is benign. This didn't satisfy me either and I left more anxious than before. I will discuss this further at our 9 month checkup in a few weeks.

Okay, enough for today. I am going to eat dinner.
Posted by Shannon at 11:10 AM No comments:

Birthday Party by the lake

Today we all went to one of Frost's school friends's birthday party. They have a cabin by a lake in Snohomish county. The water was warm and pleasant for swimming and Frost had a wonderful day swimming in the lake without a lifejacket, jumping off the jetty, climbing up onto a large inflatable lake trampoline and playing extended bouts of super squirter combat. He has a nasty graze on his knee from falling while running at the park yesterday but it didn't hurt him or slow him down until he returned to the car. Then he started groaning.

He said it was the best birthday party ever.

Wren also had a fine time crawling around on the large grassy lawn by the lake. He tried to eat hemlock cones and cracker jacks (caramel coated popcorn) but was denied. Instead he had avocado. He napped much of the drive home but revived to eat "dinner" when we arrived. He had some of the frozen sweet potato granny made him with some frozen spinach. He ate two cubes of food (frozen in an ice cube tray) and could have had more.

Josh and I also enjoyed ourselves. I had a margarita and a swim in the lake. Joshua had lots of time looking after Wren. He and Frost have just about finished watching the latest Pirates of the Carribean from netflix. I think Frost was too exhausted to do anything else and while he is enjoying it he keeps saying "wow, this movie is long".

I hope Wren sleeps well tonight.
Posted by Shannon at 1:27 PM No comments: