Running in the neighborhood

I went for a morning jog around the neighbourhood.  Houses have tall walls topped with electrified wire, sharp metal spikes or stakes. Many larger homes have a guardhouse where a security guard sits.  Everyone has signs for armed response or Blue Security posted at regular intervals along the wall.  Driveways have 10 foot high, automatic gates.  When cars drive out they wait outside the gate until the gate is fully closed before driving off.

Outside the wall the streets have no sidewalks but are verged by green lawns and plantings with red earth paths walked into them.  Some have rockeries, bromeliads, ferns, wide-leafed grasses.  All the roads are lined with trees - the kind of trees that really make good shade.  The canopy is wide and well-leafed and many trees have someone sitting under them.

You don't see many white South African's walking.  The gardeners wearing blue overalls are raking leaves from the street, the driveways are leaf-free.  At some homes, a security guard sits on a plastic chair by the gate, while other workers load bricks from a pickup or polish the brass numbers on the wall.  Maids walk the dogs and others sit, chatting on the lawn while Common Indian Mynah birds hop and sing "keeky keeky keek churr churr kuk kuk kuk".  Occasional doves call from the dark trees.

The homes are large - with patios and deck chairs overlooking the distant sea.  Some have swimming pools and tennis courts.  All have big leafed plants and lawns of uneven green (weeds are common) studded with red-earth erupting mole-hills.  Jacarandas and Flame trees are common - big seed pods lie in the road along with purple jacaranda flowers (exam season) and red earth.  Outside the larger homes the red earth has been raked clear and you can see the lines of the raking in the sand by the street.

I can see the hedge that will have martengulas later in the year, small avocados have fallen from some trees after recent winds.  Its hot and humid now - blue skies are being replaced by building clouds from inland and the sea flecks white.

This afternoon we say goodbye to Dad (who is flying to Cape Town for a weekend with the boys) and Wren and I will spend the night at Ammazulu in Kloof before flying home tomorrow.
Posted by Shannon at 7:14 PM No comments:

Sugar and the "God Cell"

#1
Wren: "I hate it when someone says you can have something for desert, like this turkish delight chocolate bar, and then you forget and you ask if you can have it now and they say 'no'"

Wren falls face down on the bed and sighs, turns, looks at me with a quivering bottom lip and then lies face down again.

#2
The power goes out unexpectedly in the Game Reserve and we are left sitting in the dark with one flashlight between us.  Dad and David ask if they can use the flashlight to get something from their cabin, 100 m or more distant, in the dark, with no fence around the camp.  We light candles in the lodge.

They ask: "Can we use the flashlight for a few minutes.  We will be back soon.  Otherwise it will be very dark walking to our room [unfenced lodge camp]?

Wren: I don't like to say this, but I am getting to the point where 'I just don't care'.

#3
We are in the game reserve and stop by some fresh rhino dung where a dung beetle is working.  We open the window so Wren can see. He rolls down the window and makes a great sound of disgust.

"Argh! SHUT THE WINDOW.  My nose is vomiting!."

#4
In this area of Durban North all the houses have Blue Security contracts and a special extra-active armed response team. On our return from the Game Reserve we found that our electric gate opener was flat and so we could not open the gate.  Because the gate and perimeter are topped with electric fence, we could not get in.  Dad drove off to buy a battery for the remote while Ingrid called Blue Security to see if they could open the gate.

Ingrid said "They have an override so if we called them in an emergency they could get in."

Rodger arrived in the security car.

He said "No, sorry.  We don't have the override. That is an added service. We get a God Cell in the car and that lets the guard on duty in the car get in for an emergency only.

Ingrid was puzzled.  She was told that with the Added Active Security package they would have a God Cell.  Dad was not sure he wanted Blue Security to have an all-access pass option.

Wren and I were listening.  We were quite intrigued by the God Cell and Wren kept mentioning it when people talked about the gate.

Today, Blue Security came over to consult with Ingrid. Later, I saw a receipt for the work order done today.  It said "Installed, one Guard Cell."

Aw, God would have been so much better.
Posted by Shannon at 5:29 AM 3 comments:

Today was our last full day in Durban.  We went up the North Coast to Umloti, to swim in the protected lagoon behind some rocky reefs.  When I was a girl we would come here to go musseling and look in the rock pools at low tide.  More recently, Dad and I have snorkelled to look at the fish who swim in the pool and collect around the rocky reef.

Wren loved the lagoon and the rocks.  We saw many small fish and Wren was committed to catching one.  Unfortunately, we did not have a net.  I did have an old plastic container which he tried to scoop the fish with.  We did not succeed.  An elderly man with a long grey beard was snorkelling in and around the rock pools.  He was wearing a long white tunic and leggings.  He told me he was a Muslim and despaired of the world - the greed which drives wars and conflict - and did not understand it.  He said, we have all we want here with some fish.  I have a snorkel.  He wants to catch some small fish. Why do we need more? 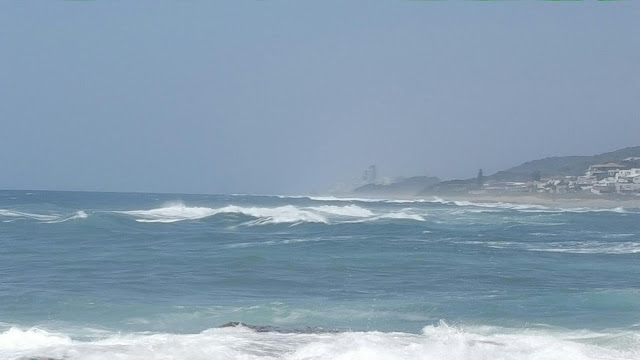 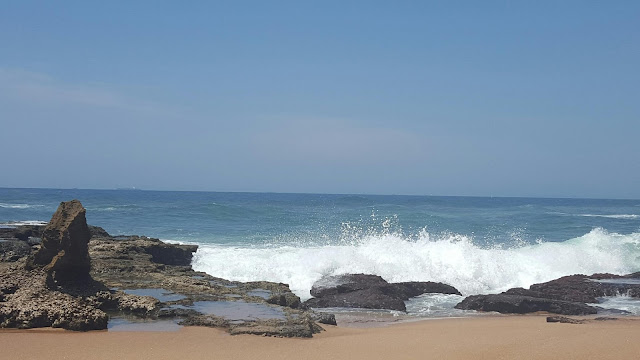 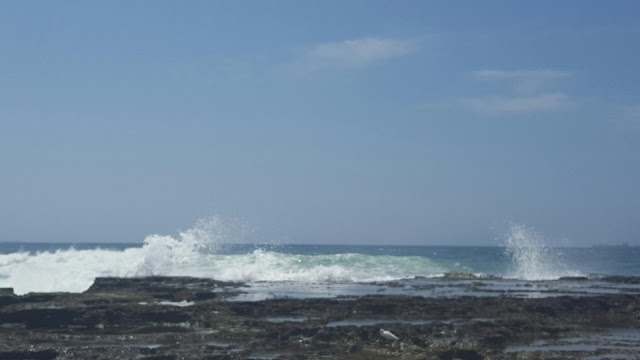 Wren & I went for a morning swim at North Beach.  It was only 8am but already hot and bright with lots of swimmers in the water. The surf life saving club juniors were swimming and running with their red boogie boards.  Wren jumped over the little waves - worried about his sore thumb which he cut on the mandolin slicer last night while copying Dad and I chopping apples.

The Thumb Cut
The cut was a Drama. I had been using a Mandoline slicer to prepare apples for a waldorf salad Ingrid was taking for Thanksgiving in South Africa. Mandolins are vile appliances on which home cooks trade mortal risk for the chance to have perfectly thin and even slices of fruit. Nobody who has cut off the top part of their thumb can look at one without feeling a bit queazy.  Generally, when you buy a mandolin it comes with various parts: 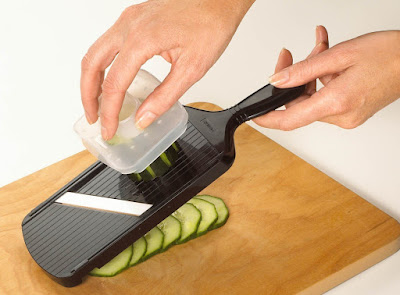 After a few months, only the slicer blade part remains because the other parts are stupid and have been lost in the back of the cupboard  Yes, I said it... stupid. Despite the demonstration videos, you really can't hold a carrot with this plastic grip thing. To do so, you have to pre-sculpt the vegetable into just-right shaped parts which wastes all the curved bits.

Everyone knows holding the fruit or vegetable is dangerous so I don't know why we do it but we do. In fact, if you google "Mandoline Slicer da" it prefills the phrase:

"Mandoline Slicer Dangerous" and gives you articles with titles like: 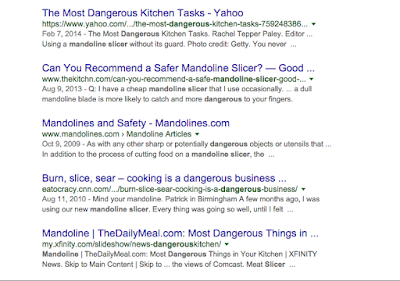 Whatever you do, do not select IMAGE SEARCH for "Mandoline Slicer Dangerous"

Anyway, we were talking about how dangerous it was and I was going slowly, so Dad took over slicing and went fast. I felt ill and walked out the kitchen because I was sure he was going to cut himself. Wren was watching and eating apple slices.

Dad put it down to lemonize the apples and Wren just picked up a wedge of apple and started slicing it fast "whizz whizz".

But he was already screaming "Arghhhhh" and bleeding everywhere while I yelled at him about a minute late about the Mandoline slicer.  I think there was a Fuck in there too.

It bled for a long while and took three bandaids, including a cool bandaid from Japan and caledula ointment to stop it.  It rather ruined the evening because Wren had ongoing commentary about his finger with themes like:
Back to the Beach
So, this morning we went swimming at North Beach and despite swearing he would not swim, Wren was pleased that his cut did not sting. In fact, the bandaids fell off and it does not look so bad. Dad warned that the top of the finger will dry up and fall off.  I have not mentioned that to Wren yet as its only a small piece of finger but he is probably attached it it. Well, he is attached to it now and that would worry him.

The beach was stunning.  Warm water and small waves.  I took Wren out about 4 m from breaking waves past the little sandbank (right on shore) to a place that he could only just stand but could float up and down the waves holding onto the boogie board.  I said he could say "Home" anytime and I would take him back to the shallows.  He said "Home" twice - once when a wave was a little steeper than usual and once when he was concerned about a big wave. We plan to swim every day that there is sunshine.

Morning coffee at Juran was great.  David and I had soy.

David has headed back to Cape Town with his 100% Rye Bread and Garlic oil.
Posted by Shannon at 11:19 PM 1 comment: