My Kids Are Weird

This morning I noticed Wren had a purple bruise on his foot.
"Oh, look, you hurt your foot! How did you do that?" I asked.
"When I was a baby I trod on a dead beaver and it had a spike in back and it hurt my foot but I am alright now," he told me.
I mean, what do you say to that one?
Wren is also clever at reading 'signs'. He can read the green walking figure to tell me when we can cross the street (but fights me holding his hand while I insist). He saw this sign at the coffee shop we like near Frost's school and told me it said "DOESNT STAND ON ONE FOOT HERE." 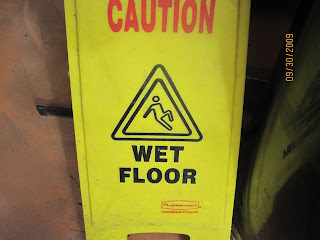 We really like that coffee shop because they will make kidicino's - foam filled little espresso cups with a sprinkle of chocolate - for only 50c. As any good Seattelite, Wren takes his 'coffee' very seriously. 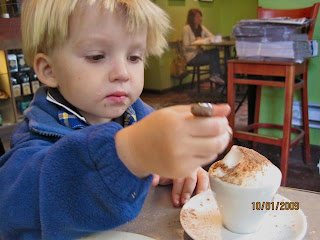 Meanwhile, Frost is in the kitchen unpacking the kitchen cupboards to find products "past their expiration date". 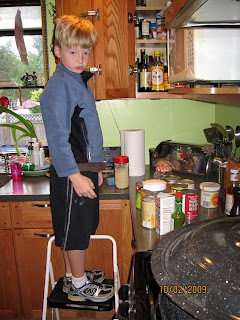 Since I poisoned him with rancid peanut butter a few months ago (he had a horrible bout of food poisoning from peanut butter I found in the Emergency Supplies Cupboard and fed him before checking its use-by date which was 3 years prior) Frost is very invested in checking food is not expired. He is also distrustful and routinely looks on boxes and cans before he eats things. The stuff he found in the cupboard today has raised his level of vigilance:
1) A bag of soy flour expired in 2005.
2) A cup of noodles in a flavor none of us eat. When opened it erupted in a purple dust of [probably toxic] mould spores leaving a few undecomposed noodles like the bones of an oracle. At least I would not have FED him that one.
3) Various grains eaten by weavils.
4) Packaged tofu that was EAT BY last year.
See, I tend not to think that expiration dates are very important with dry goods. By contrast, with meat I am quite careful and so those sardines that expired in August 2009 had to go.
For breakfast, I am eating the sardines which expire in a few months. Yum.
Frost and Wren dumped all the expired foods into a bowl and mixed them up. Frost pretended that the tapioca was snail eyeballs and the prunes were something else yucky. 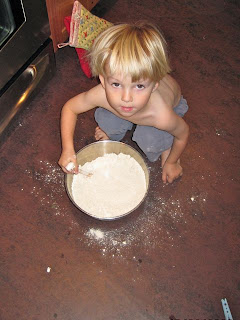 Even though its early we have already been doing gardening and now its time for tea and sardines.
Posted by Shannon at 1:16 AM 2 comments:

We had a relaxing weekend. At least I think we did (I honestly cannot remember much of it but I know I had a bath and read my book and that Frost had a soccer match). Today it was cool and the typical fall weather of dark skies, slight rain and buffeting winds set in by the afternoon. Inside its warm with the furnace kicking in overnight. There are spiders everywhere - one fell on me in the bathroom this evening - as if they know its time to find a warm nook inside. Our Halloween decorations are coming out.

On Sunday we had a lovely brunch with Tara and Fred while Frost caught up on his Alexander time. After breakfast we walked and rode bikes up to Meridian Playground and ran around and collected horse-chestnuts for Wren's sensory table. Wren went on a big kid swing for the first time while Frost threw apples.

Frost is very focused on Halloween. He writes about it in his journal, plans a party and has already started decorating the house. Here are Frost and Alex dressed up on the weekend. I am not sure what Frost is supposed to be but he was colorful. 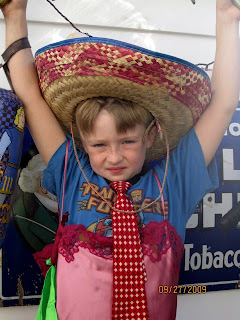 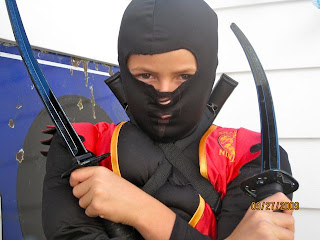 This morning Wren had his first day alone at Roaring Mouse for the whole day. He took some of his favorite things - skeleton spider, a rubber bat and soft shirt - so he would not be sad. I came back in time to watch closing circle and he was sitting quietly mimicking the teachers crossed legs and clapping. 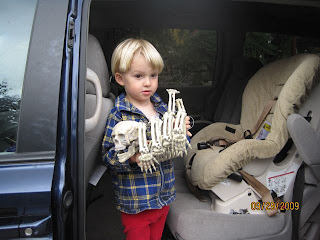 Wren is a danger

Tonight at the preschool coop parent meeting the educator mentioned that 2 year olds have little spatial awareness. This was the most important thing I have learned at preschool and explains why Wren is so dangerous at present. On the weekend he borrow Alex's "Gyptian sword". The Gyptian sword is a costume prop but has a very sharp tip. Wren loves to run around with the Gyptian Sword ("Mummy, where do Gyptians live?" "In Egypt" I answer.

Wren's 'mirror neurons' are very active at the moment - he loves to copy exactly what I do. If I touch my hair, he touches his hair. If I take a bite of my dinner, he bites his dinner. If I sip tea, he wants some tea to sip. This is not so good with Frost's behavior. Wren runs after Frost copying his thrusts of imaginary daggers, kicking walls and leaping off sofas in emulation of Frost's 'moves'.

Tomorrow are going bird watching and Heather will be here in the afternoon. We are also going to make orange playdoh for Halloween. 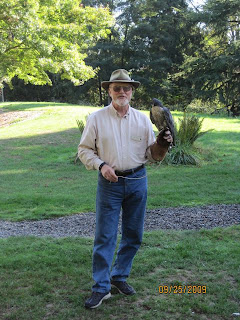 The peregrine falcon who may speak Spanish
Posted by Shannon at 3:07 PM No comments: