Imagine you emigrated from the USA and ended up in some up-country South African town where people eat boere-wors and Nescafe Instant coffee.  Now you have children.  Instead of the cultured Starbukkers of your youth, they like Milo and anchovy paste on toast.  Your friends let them sip wine and shandies at braais.  What can you do?  Nothing, of course.  But to make yourself feel better you bake choc-chip-cookies and force-feed them pepperoni pizza for parties - imported pepperoni of course.

Well, my expat attempt to emphasize my children's colonial roots is The Crunchy.  If you fly SAA to South Africa, odds are you will get a crunchy with your tea or coffee.  They are served at parties, kept in the cookie tin, sent in lunch boxes and shared (chocolate coated) at Christmas.

Crunchies are the South African choc-chip cookie and now you too can enjoy them!

Here is a great recipe. from Orna Bakes website.  If the link is broken, ask me... I have a copy of a few versions.

I am waiting for my second batch to come out of the oven.  They take a while to harden and the kids keep coming to check "Are they ready yet?  Are they cool?"  Of course, I can't smell anything even this close but they sure look good. 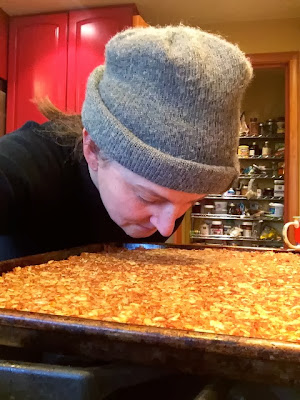 Another good recipe is my aunt's recipe for klapperys (coconut ice).  You American's have no idea what I am talking about... you probably think its some kind of dairy-free desert or a coconut smoothie.  It is not!  It is about 50/50 desiccated coconut and sugar.  I shall post hers later (photostream glitch) but for now you have the web version.

Meanwhile
Wren and I went for a walk together to return books to the Free Little Library.  All around our neighborhood there are little outdoor book boxes where you can take or drop books.  I often read books from them - an odd and seldom curated mix - including When Bears Attack, fantasy novels, romance, scandinavian detective novels and whatnot. 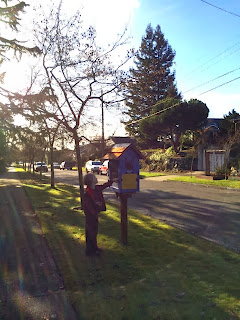 On the way home Wren confided that his friend Piper had told him that her cat puked its intestines out and is now dead.  Did I think that was gross?  I said I thought it was gross.

This is why you must take your kids on walks - to find wild books and learn about gross secrets they have been keeping.

The Blog is Back

Apparently Facebook is not nice for everyone and family, near and far, have been missing out in a big way.  They didn't know that Wren turned 7, they didn't hear about the snow, they didn't know how cute the kids are or that I have lost my sense of smell ... SO... we are going to go back to blogland.

In which we do not get the dinner we planned
The first news to report is that we did not go to the new Seattle Din Tai Fung for dinner because the wait for a table was 1 hour and 45 minutes at 6pm.  Apparently, this is not a family-friendly place to eat as you cannot make a reservation and you cannot put your name on a list until you are standing outside.  Its like that Whale Wins place that is so popular that I have never eaten there.

Because I really care about dumplings, next week, I shall go and take my laptop and put our name on a list and then Josh will join me with the kids for dinner.

Because we were all geared to eat out, we went to Bengal Tiger instead.  Wren whispered "don't tell them but the thing I don't like about this food is that it is all spicy".  He drank two glasses of water and a mango lassi as well as lots of tandoori chicken, vegetable samosa and rice.  Then he was full up.

Josh and I ate as much as we could of the remaining dishes but we have enough for dinner tomorrow in the leftover box.

We all ate sugar coated aniseed on the way out.  I could only taste the sugar since aniseed is mainly a smell.  Today, I also noticed I could not smell cologne, dog poop, Frost, Beezles sour ears or chocolate.

The ENT
On Tuesday I am going to see an ENT.  I went to see the regular doctor this week to follow-up on my anosmia (there, a scrabble word for you).  Last time I had seen her I had impressed her with my profound smell loss by being unable to smell anything in a bottle of dried porcini.

She prescribed 3 months of B12 in case it was due to a deficiency but I have had no improvement and asked to be referred to an ENT.

She called the ENT while I was there.  He said that the most common cause of loss of smell was a viral infection (a cold) or chronic sinus infection.  I cannot recall a particular cold causing this but it has been a long while.  He also suggested I try zinc 'in case'.

I will report back after the appointment.

Cayman Islands... Soon
I have put a laundry basket out in the bedroom and am throwing things in it for our trip to the Cayman Islands.  Today I threw in a $2.99 snorkel and mask which I bought at Goodwill and a $40 pair of fins and mask which I bought on the Sports Authority Sale.  Apparently most people are buying snowboards and skis despite the snow drought.  I have also put a hold on a book at the library titled Birds of the Cayman Islands.  There are many new birds, parrots and a strange kind of forest called Dry Royal Palm Forest in which huge palms poke out of dry deciduous forest.    You can see them in the book preview on Amazon.  I have also ordered a plankton net with 300 micron mesh for the kids to capture larger zooplankton for our microscopic research project.

My Cayman Island To Do List now looks like this.  Of course, this is very tentative and there may be more or less lying around.