Wren has a stomach bug and diarrhea so he's a bit sluggish. Its nothing serious and he's not dehydrated or anything but its been 4 days now and its getting tiring. I had to change 3 diapers in bed overnight. It was a bit too hands on for my liking. Thank god for that Purell stuff. He doesn't seem in pain or unhappy when he's awake but he's sleeping a bit more than usual.

I am not worried this is anything else because I've also had an upset stomach. I spoke with the other pediatrician - Ellen Paslow, I think her name was - and she said that it could take up to a week for him to get over something like this.
Posted by Shannon at 3:46 PM 5 comments:

I had a lovely bedtime with "the kids" tonight. Wren sat in his chair sucking the binky and kicking with excitement and Frost lay on the floor with a pillow in one of the makeshift beds he likes to make. I was reading them baby board books. Frost was quite enamoured and Wren was agitated and engaged. We read The Very Quiet Cricket, As Quick as a Cricket and Baby I Spy. Frost is a bit grumpy that I wouldn't read "one more".

The experience was a reminder of how content can be received at different levels. Wren just liked me saying something and looking at him. Frost noticed things, asking questions like "do crickets make noise by rubbing their wings together?" and "why do they say 'as grumpy as a...". We even played games making up new similes.

So, it was a good evening. Now Wren is reluctant to go to bed and is whining about it in a half-awake half-asleep state. Better go and be the soothie.
Posted by Shannon at 3:08 PM No comments:

Iron issues and "Why don't doctors explain why?"

I am going to have to ask more questions. Wren has been prescribed liquid iron supplement because his iron levels are "a bit low". I forgot to ask exactly what the level was but he is supposed to have 0.3ml daily.

During pregnancy I was prescribed iron and had a terrible reaction to it so I was a bit reluctant to give Wren iron. I started doing it every other day and then, after talking it over with our pediatrician, I did it every day for a while. Still, I was less than stellar in my iron protocols because I've always been told that the fear over anemia of breastfed babies is overrated.

Anyway, I was just reading this article on dietary needs of infants and food introduction post 6 months. This interests me because that is when Frost's allergies became noticable adn we found out about the wheat/dairy/gluten thing. It says:

Iron is an important mineral in the second half of the first year when babies have used up much of the iron stores they received from their mmothers during late pregnancy. It is especially important for infants at risk of iron deficiency anemia due to preterm birth, blood loss after birth or those born to mothers who were diabetic during pregnancy. Iron deficiency anemia has an adverse effect on cognitive development adn motor development.

I know Wren lost blood during both procedures and had one transfusion early on. I think he really needs iron. I wish that doctors would explain their thinking to me so I feel better about giving him these things daily.

He really dislikes receiving his medicines. The Zantac is the worst because it is an acidic peppermint. The iron is a bittersweet lemon and the aspirin is okay but makes him wince. I often mix the Zantac and aspirin which omits one dose but Wren is very cunning and spits out the mixture if at all possible. I have learned to squirt it in his back cheek which makes more go down, also tickle his throat and blow on his face. Still, we do not enjoy the process and a few of his outfits are stained yellow with partial iron doses he spat out.
Posted by Shannon at 2:57 AM 8 comments:

No reason to be tired 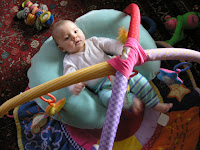 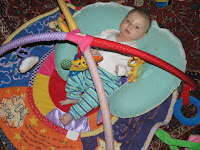 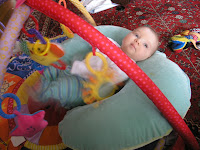 I went to my Listening Mothers meeting this morning. It was a good one in which we discussed "falling out of love with your baby". There's this theory that the primary caregiver of children has to be the container for the baby or child's emotion/behaviour and problems occur when the mother instead reflects back or amplifies the emotional excess. I don't know about this theory but I have certainly felt a bit of amplifying going on when Wren won't sleep and gets more and more cranky and un-put-down-able.

Anyway, last night he slept okay again (slept from 9pm-12.30pm then again till 4am-6am and another hour till 7.30am. However, I wasn't feeling well so I was up a few times while he slept and feel rather run down today. Oh, yeah - its Valentines Day!

Frost had cupcakes for breakfast and took his bag of valentines off to school. He was very excited and wrote me a note saying I LUV YOU MOM. Wren's valentine was smelling so good. The top of his head feels like the skin of a very small labrador puppy - loose, soft and warm.
Posted by Shannon at 9:48 AM 1 comment:

Here is a movie of him in the gymini. He has just started to "play" with things and loves to watch mobiles. He can do this for 15 minutes at a time without fussing.

I shall post some more pictures later. Right now he is very fussy because he missed his nap late this afternoon - he just kept waking up until I gave up on the 5th attempt. Frost is very frustrated we didn't get to play at all and has reverted to television.

Somtimes when I wake up in the morning I imagine what I'd do if I was a celebrity. I'd call in my PA. She'd be named something like Jessica or Penny. Jessica/Penny would arrange for my masseur to come out the mansion ASAP to work on the stiff back and cramped shoulders I have from co-sleeping and wearing the sling half the day. At this point in the fantasy reality steps in in the form of Frost wanting breakfast and I figure I wouldn't be co-sleeping and stiff anyway if I was a celebrity. I'd have night-nanny named Laura/Jane or maybe an aupair Yvette/Brie who would take care of all the night-wakings.

Actually, last night was fabulous. I went to sleep with Wren at 9pm and he slept till almost 1am and then again till 5am and then we had a few hours of restless sleep (causing the back to be stiff as he remained in bed instead of transferring to the wedge). I didn't post yesterday because I was so exhausted. Wren slept okay on Sunday night but he started his sleep for the night at 8pm so he was kind of done good sleep at 3am and I went to bed at 10pm so I wasn't done at all.

Its interesting, Wren is developing a rudimentary kind of schedule. He likes to be awake from 2 to 2.5 hours before napping again. He takes a while to settle for a nap and then naps from 45minutes to an hour. He enjoys looking at his mobile and nursing. He loves diaper change (talks and smiles a lot during DC). He goes red still but only when he poops (around 4am and various times during the day). I am such a pro that I do diaper change in bed in the dark.

Anyway, I must now make breakfast and lunch and all those other morning essentials like coffee. If I was a celebrity I'd have it in bed, made by Charles/Stefan. Joshua?
Posted by Shannon at 1:46 AM 4 comments:

We are having another good day after a great night. Yesterday we had many wins:

Oh, and I am feeling very optimistic about sleep. I don't know whether it was dairy or timing or both but Wren has transformed. Before yesterday he would cry a lot and I could never set him down to sleep. Yesterday he napped 3 times in his wedge - once for an hour - and he put himself to sleep all three times - it took between 10 minutes and half an hour before he was really asleep and not peeping and I went in a few times but he was much calmer than when I carried him around or tried to nurse him to sleep. He also napped in the sling. Also, he put himself to sleep at night without crying and slept for 3.5 hours, then 4 hours then 2 hours. There was some grunting but greatly reduced and one pillow on my head took care of it.

Joshua cautions that I must not become attached to him being this way. Of course, he is right but I am having trouble maintaining openenss and equanimity on this one. The buddha can be right about everything when I get enough sleep.

Is this the answer?

After my first night of absolutely almost no dairy (rather than a little bit of cheese or icecream here and there) Wren slept 4 hours, then almost 3 hours then 2 hours. It was wonderful. I woke up at 1.40am and looked at him and he probably wouldn't have completely woken up then if he was a crib-in-own-room baby but he was grunting and gnawing his hands in his sleep so I knew he was hungry and nursed him back into his deep sleep (the next 3 hours).

Also, I didn't carry or nurse him to sleep at first (he was just super-fussy and exhausted). Instead I calmed him and put him in his wedge in the dark bedroom and hung out with him a bit. He fussed then just dozed and woke every few minutes so I left him there. Every time I checked on him he was dozing or looking around the room quietly. When I wanted to go to bed I nursed him and he slept like a log for 4 hours.

I wonder whether he is used to lying there on his own from being in the hospital so long, not being able to be picked up. We used to soothe him in the wedge with a binky and singing.

I am going to try this again tomorrow and hope it works. It was the most delightful night.

Oh, Frost started to feel left out of the family bed so he came along sometime in the night and slept on his little bed in our room. During the night I woke and Wren was grunting, Josh was snoring and Frost was having a dream conversation of unformed words and rolling overs. I felt like a sleep fugitive - I was so well rested from the 4 hour stretch that I didn't even feel tired and I was surrounded by this sleeping cacophony. I threw a pillow over my head and went back to sleep.
Posted by Shannon at 3:16 AM 2 comments: