On Monday, we hosted a school playdate party at which a group of 7 boys built a lego diorama called "the Great Lego Battle". They were presented with a large lego base which they populated with minifigures and castles and encampments of great complexity. Here is the base before construction began: 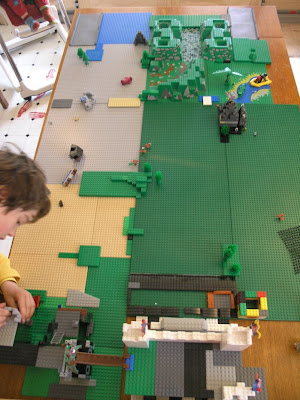 Unfortunately, the logistics of the event meant I failed to capture the final product adequately. There was too much icecream and chips and testosterone and Wren to remember but I found it interesting how much action was involved. Unlike grownups playing with Lego the boys did not build and then reflect on what they had made as an object. It was all a world in motion. A dwarf, in place, would suddenly rush forward and knock over a horseman with a sword and binoculars. A boat would capsize and knock over a tree. The black dragon would be captured by the "good guys" and then the "bad guys" would capture a blue flag (defining good territory). Toward the end the Battle became more codified with each boy taking a turn to move a guy and narrate what was happening like a role-playing game:

My ninja is a BAD GUY

But he's got a blue flag.

He captured the blue flag. Its a decoy!

Well my dwarf captures it back. UGH.

Its not your turn.

But you moved the dragon!

It was very noisy. Wren tried to play but was rejected.

Here they are in action. It is still the building and mild skirmish phase: 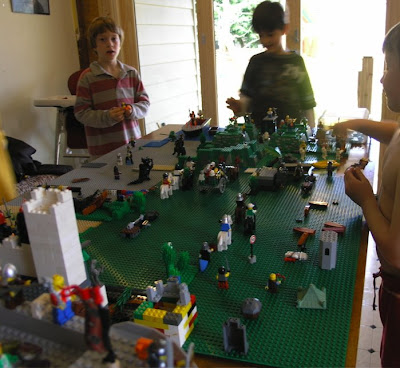 Here is a detail of the armaments of a castle: 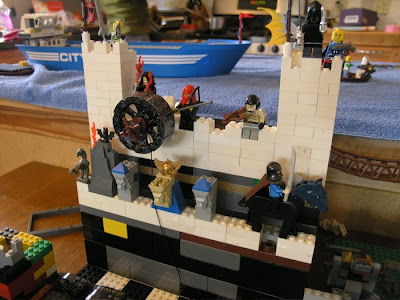 And finally, a rather splendid troop transport built by Zephyr. 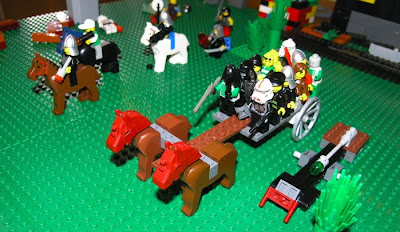 Posted by Shannon at 4:19 AM No comments:

Wren took his first self-portrait on Monday. He was looking down at the camera on the dining room table and pressed TAKE. 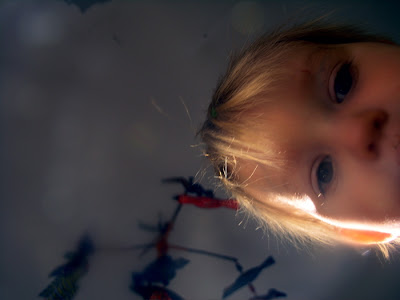 Wren will be 16 months old this Sunday and he is increasingly opinionated. This morning he slept in until 6.30am so, instead of going straight home to nap, we could take a walk around Greenlake after carpooling. Wren loved the walk. All the way along the trail he pointed to dogs and said "oof oof" and to birds to say "kar kar" (for crows) and "mch mch" for feeding ducks (eating). He said "hat" a few times when passers by were wearing caps and became extremely excited when he saw starlings fly up into a tree "up up!!"

Another commonly repeated phrase is "die-die" meaning "dice dice". We store Joshua's role playing dice on a high shelf in the bookcase and every time I do diaper change I let Wren hold a could. As soon as he lies down for diaper change he holds out his hands and says "die-die" again and again until I submit. I am not sure what it is about the repetition but he likes to say words twice, as if for emphasis!

This picture is of a rare moment in which Wren was allowed to play with all the dice together. He is moving them from one bowl to the other. 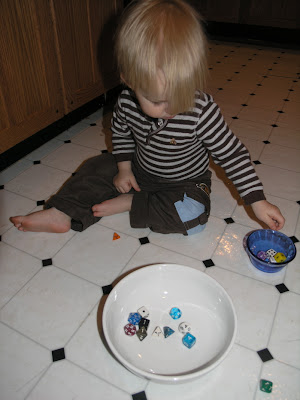 Frost's Conservation Effort
After our walk around Greenlake we stopped at the library and the park. Wren helped at the library by removing books from the shelves indiscriminately so we were rather brief there. We managed to find a few books on lemurs for Frost to help him learn how to save the Hairy Eared Dwarf lemur. Since the Xeko game arrived in our house and Frost bought the stuffy Dwarf Lemur he is very keen to join in the conservation effort and has committed all his savings to this end. Tonight he became teary when we read that Aye Ayes are endangered in part due to local beliefs that they can cast curses which leads to them being killed out of fear. 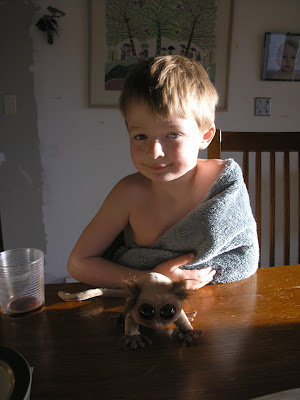 Loving the Dump Truck
Back to Greenlake - Wren played for a long time in the sand at the playground using a borrowed dump truck and front-end-loader. He was so happy in the sand that I made an afternoon trip to Lowes to fill up with 10 bags of play sand for the neglected sandbox. Wren hated Lowes. He wanted to play in the fountain (not allowed) and to leave the cement and sand aisle (not allowed) and to be picked up when I had to push a heavy cart (not possible). After lots of struggle we made it home and the sandbox is now half filled with fresh kitty litter, oops, sand. Mental note: buy a tarp to cover it.

Helping out at School
Both boys came with me to school on Tuesday for an icecream social for incoming K-kids. Frost was very helpful, showing people around, answering questions and being generally charming and a good host. He even made nametags for himself and Wren. His read "Kid Helper" while Wren's was "Baby Helper". Wren didn't notice so it stayed on all night. 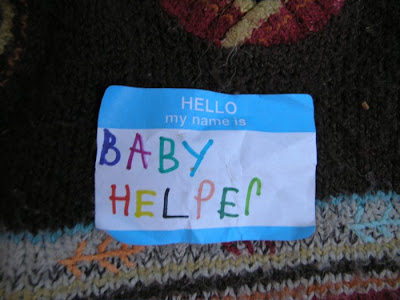 "Aye-aye"
I would love to say that the icecream social started us off on ice-cream but it started a few weeks earlier. Suffice to say that we have been very much into the ice cream of late, so much so that just breathe the word "ice cream" and Wren chants "aye-aye" [his version of the word] and rushes to the freezer door and tries to tug it open with many grunts, moans and whimpers. When it is opened for him he scoops up a tub of icecream and carries it to the island for serving. He knows the ice-cream scoop and starts the chant in the morning when we find it clean inside the dishwasher. He also tries it after lunch. Here is Wren with his first self-held cone. 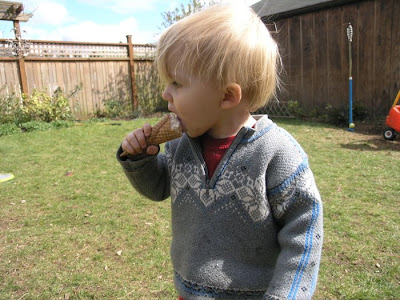 I think it is amusing that he is eating icecream wearing his warmest sweater. It is sunny but it has been a very cold week. The icecream obsession has spread into the literary realm. This evening we read a library book on the history of icecream and learned the important fact that the most popular flavors are (in order): Vanilla, chocolate, neopolitan and strawberry.
Posted by Shannon at 12:45 PM No comments:

Our Children Can Swim with Dolphins aka 'when do you qualify for charitable fun?'

I subscribe to a discussion list with the congenital heart information network. Its a great list to connect with other parents of kids with CHDs and some who have graduated into the great big world of adult cardiology. Alongside the many issues of concern on themes such as:
there are these fascinating string of discussions on the subject of charities that offer treats, trips, gifts and just jolly good experiences to kids who are sick. These fascinate me.

The most well known of them is, of course, the Make a Wish Foundation referred to on the lists as MAW. It is appropriate. The politics of the MAW seem to bring mature parents to the edge of the abyss. See, unlike those shows you see on TV, to qualify for MAW kids do not have to be on death's door. The door could just be bigger or less blurry than for other kids. Those who may qualify are those who have "a life-threatening medical condition" and ages between 2. 1/2 and 18 at the time of referral are potentially eligible for a wish. But MAW seems to have different qualifying standards in different areas so while one child would qualify with a 'garden variety' critical aortic stenosis requiring a Ross procedure in another area you have to have HLHS or transplant.

Parents have to wrestle with other decisions. When to apply for charitable fun? If you apply when they are a young child they don't get as much input and may not have as much fun. But what if they really are going to get sick, too sick to go? You don't want to miss it? Or alternatively, what if they are going to get well... to well to qualify? You don't want to miss it?

Also, your child may qualify for a wish or a trip or, as I learned today - a swim with a dolphin - but you may feel icky about it. Being in mortal danger is not something to be desired and many of us with 'healthy' kids with CHD's are not eager to rock the boat and enter the realm of the newsworthy even if they qualify because of the inherent risk their condition poses.

So, unfortunately, we will not be swimming with dolphins anytime soon - for free or otherwise. But I am dreaming about Hawaai at the end of the year and wondering whether we could just live without a deck for a long long time in order to maintain a healthy holiday fund.
Posted by Shannon at 3:34 AM 2 comments: