The narrative of life

Wren is incredibly chatty thesedays and he has me in stitches with her commentary on life. This evening we had a rare thunder storm and a particularly loud clap of thunder sounded while Wren, Frost AND I were in the bath together. Frost and I were talking about lightening and thinking that we should get out the bath in case it STRUCK the house and then us. Even though we were laughing about it we scared ourselves so leapt out of the bath. Wren was very confused and kept asking "why we get out?" "Is thunder big wood fall?" "Why we get out, thunder?" It took an hour to get it out of his system.

Meanwhile he loves to torment Frost. He chases him around the house saying "I PINCH YOU" and holding out his tiny little fingers in a threatening pinch from which Frost runs, screaming. They run around the house using furniture to block and scramble over. Add to this picture that Wren is usually naked or shouting "why I got no diper, can't play with no diper!" He has no diaper because we have been half-heartedly potty training him again and he does 3-4 pees in the potty daily. If I put a diaper on him he will generally use that out of convenience. Potty training is not ideal because he will have 3 or so false-alarm trips to the loo in addition to those successful ones.

A few days ago we went for a walk and Wren found this mini-garbage can. Its one of the new 'small' bins that you can choose if you produce less waste. Wren was thrilled. He said that he had found "small garbage can for kids". 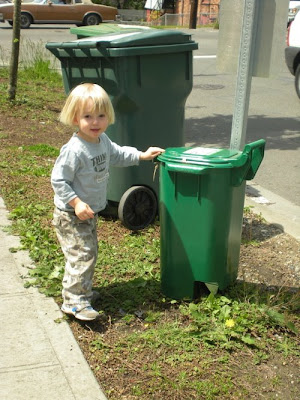 His favorite game is now zooming cars. On the weekend we went down to Tacoma for Sarah's birthday and Wren spent a long while in the garage zooming hotwheels cars. Half the time they roll and half they time they kind of tosses them. 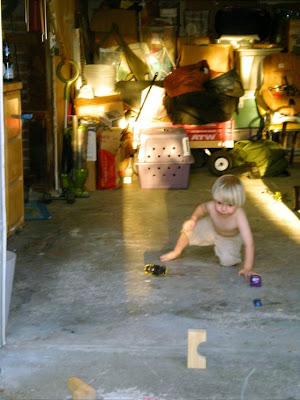 Drawing the Family
Yesterday Wren started drawing people. First person he drew was Daddy. I don't have that picture yet because its up on the wall in Wren's room, and he is asleep. I asked him to draw some more people and here are his drawings and what he said about them:

"I drawed Heather. She is look like MONSTER" He laughed a lot about this. She looks like a monster because Wren tried to draw her teeth. 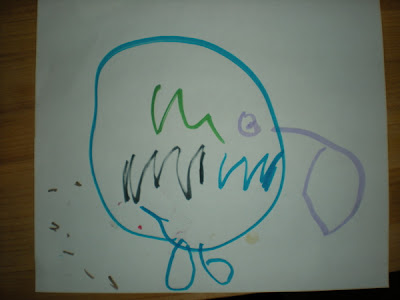 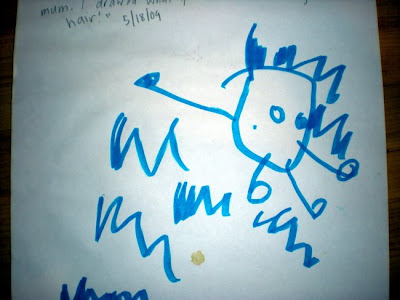 "I drawed Granny and Roy. I drawed her hair!" 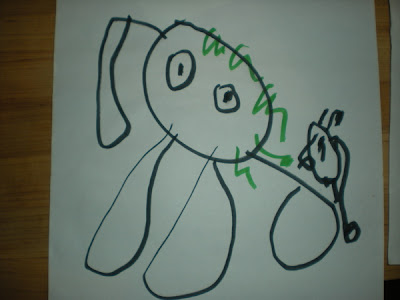 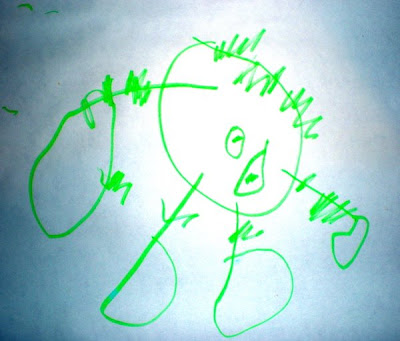 While we were in Australia Frost draw his own cartoon warning of all the things Wren should not do. Here it is. The sign says "THINGS WREN SHOLD NOT DO. KICK ME. BITE ME. HIDE MY STUFF. TELL ON ME. MESS UP MY STUFF. PULL MY HAIR." 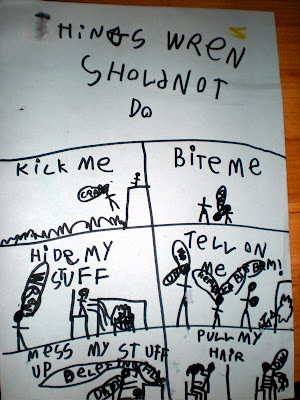 As an elder child myself, I feel for him.
Posted by Shannon at 2:38 PM 1 comment:

Our school holds parties as one of its fundraising projects. Families offer to host an event (called a party) for anyone who buys a ticket. Other families bid for the events they or their kids want to attend.

This afternoon we hosted 7 children age 6-8 years old (+ Frost for an 8th) for a sushi making party. I prepared the rice and cut the difficult vegetables while they peeled cucumber, washed rice, peeled, pitted (that was fun) and sliced avocado and made unagi dipping sauce. Eve and Megan (the only girls) were the most help with preparing the vegetables while Isaac was intent on making unagi dipping sauce and stirring in the sugar because "that sauce is always quite sweet."

Then we were ready to roll.

I had set out 8 mats within reach of all the fillings and condiments and plopped a lump of rice on each nori sheet. It was clear that some kids are sushi veterans while others were confused about whether to put down the nori first. Eve, Megan, August and Oliver were competing for the tobiko while others had eyes only for the carrot and cucumber. Isaac and Evan were very methodical and specific in their tastes and wanted to eat straight away. Megan made 3 rolls before others had done one.

The rice spreading was the hardest part. You have to brush the rice into place gently with slightly moist fingers. Kids decided to THUD it flat (that one was in the bin) or slosh on so much water the nori became elastic (that was was also compost) - rice was soon underfoot (it is not nice walking around with sushi rice on your feet) - and Frost said "this is IMPOSSIBLE!!!" Finally everyone had a good covering the fun began. The first ingredients to be finished off were the tobiko and unagi (flying fish roe and bbq eel). Who would have thought? The black sesame and sea salt seasoning was also hugely popular. Everyone used cucumber and carrot but avocado was less popular. Only the adults liked smoked salmon and cream cheese.

There was a bit of difficulty with how much to put in the rolls. Some kids put a huge pile of their favorite ingredients on the first roll. I caught Oliver with 4 slices of unagi and 5 carrots in his first while Eve used 4 teaspoons of tobiko leaving only half a jar for the rest of us. I actually scraped a bit off to avoid a riot among the other lovers-of-roe and rehabilitated some of Oliver's unagi into my own roll.

I think that 8 kids meant I had less chance to do my pedagogical piece and explain each ingredient. I'll try and do it again with fewer kids on a playdate.

After the rice was all used up (I cooked SIX CUPS and it was gone in moments, I cooked another TWO CUPS later and they ate that up as rice balls with black sesame seasoning on) they went outside to play with water guns and the party evolved into a super soaker fun fest the legacy of which is 7 soaking wet muddy towels in my laundry closet along with 5 pairs of wet muddy shorts which I leant to kids concerned about their clothes. They all clambered up into the fort and strung the hose up there and ran it down the slide to create a water slide. The lawn at the bottom became a mud wallow so they smeared mud all over themselves and then slide even faster. Evan and Frost were awfully totally soaked and looked as if they had plasted themselves into mud cannonballs.

It was super super fun apparently although there were some tumbles, lots of screaming when Frost flashed his bum and Wren chased the big boys with weapons and was taught to say "you suck" by Frost who is in the dog box over that. They also made 'sun tea' by mauling my herb garden and mixing the leaves with water in a big jug.

My kitchen floor is now a mixture of caked on squished rice and muddy footprints but all will be well after a mop tomorrow. So far, the coffee brown marmoleum is holding up well!

Wren also joined in the sushi party. He ate lots of sushi and made a roll with help from Joshua. For breakfast Wren ate smoked salmon and scrambled eggs and found it delicious. We have plenty left for that again tomorrow.
Posted by Shannon at 1:46 PM No comments:

Walking in the rain

We are having a lovely sunny weekend with real pre-summer heat and Frost is running outside in shorts. It is a great day to plant out the tomatoes and the baby chicks are having a whole day in the coop with their heat lamp - the sun.

It wasn' t like that last week. It feels like everyone we know has been sick and its been rainy and dark during the day. Even Wren who typically hates "raincot" was willing to wear it to go for a walk. Here are some our our pictures from the walk. I allowed Wren to dictate some of our subjects but this one was mine. Its a peony. I have always wanted a peony and this week I bought one at Costco. This is our neighbors peony which produces giant flowers every year. I am hoping to do a painting of this foliage. It feels so substantial and reminds me of the art of the English crafts movement which so beautifully depicted acanthus leaves, artichoke and sinuous vines. 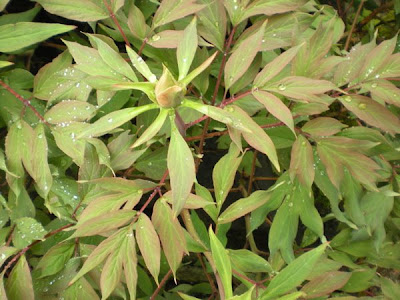 Wren is in a dangerous stage of wanting to taste every plant he finds. He walks up the street asking "its idble?" (aka "edible") and breaking off leaves from rose bushes, lavendar, trees and other shrubs. Today he ate honeysuckle. Whenever he passes a thyme or fennel bush he tears off a handful and chomps it with drooling green saliva. "I can eat it?" he asks, after the fact. I have told him to check with me and he is always excited when we find a new herb or vegetable hiding among the garden plantings on our walk. Here Wren tastes some fennel. 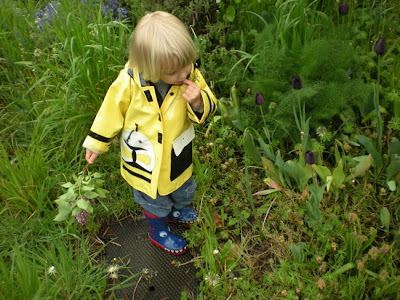 This picture shows Wren asking whether he can eat fern fronds and "why they curl?" I didn't tell him that you can eat fronds cooked but waited while he tried to uncurl each frond and became frustrated when they ravelled up again. 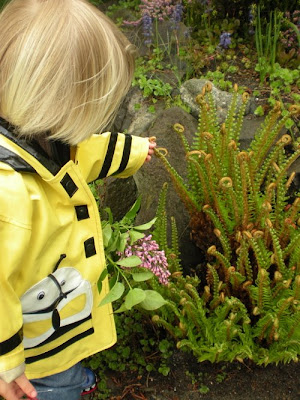 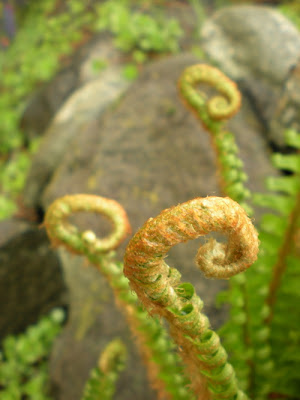 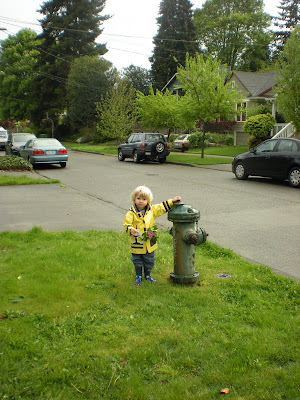 I love the rockery succulents that grow here. They explode in summer and burst into flower. I have lived in other places where I had succulents but never have they been so profuse and easy to grow. So much for Seattle the rainy city. 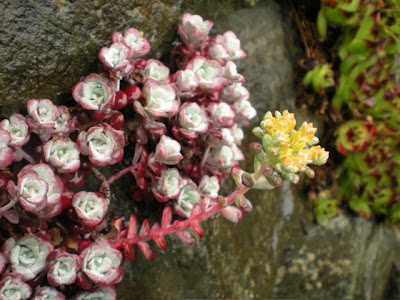 Wren is anxious about getting wet when it rains. On this walk I wasn't even wearing a raincoat in the light misting of rain but Wren wanted a 'brella and his raincoat. He annouced that the "raincoat DOES have pockets" as if this was a significant factor. 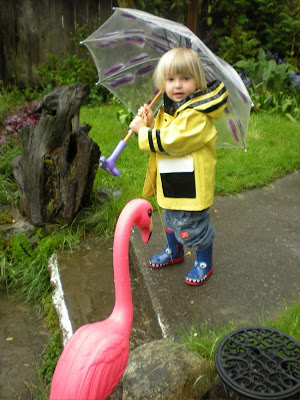 Posted by Shannon at 5:38 AM No comments: