Last night Wren woke up at 3am (again) after almost a week of sleeping through the night. It was either because he wanted to check I was home after Heather put him to bed or he was practicing speaking. This morning, he woke up with a whole new vocabulary.

We have just been playing in the bedroom (aka cleaning the bedroom and rolling around the unmade bed).

Wren said "tent?" [because josh and he play making tents out of sheets and blankets] Then he paused and added "Tent, MINE, Dada". I confirmed that Dada makes him tents. He said "Dada down" (pointing out the bed). I asked where Dada is and he said "Dada, bye-bye, car."

I was very impressed.

Old words I forgot
Juice
GO
Mum (drum)
Posted by Shannon at 7:16 AM No comments:

The alternative title for this blog post was "when kids cook..." so you can imagine what has been going on in our house.

Frost recently bought a child's cooking book from the thrift store. He has very much enjoyed making food, even though I have to help a lot and end up eating most of it.

This was not the case with the lemonade. The recipe was titled SUNRISE LEMONADE. Frost squeezed lemons, stirred, poured in homemade sugar syrup (made by Mum) and measured water. At the end he spooned in Cranberry concentrate. He mixed it all up in a big pitcher and with the recent heatwave we have enjoyed drinking it.

This morning I poured the dregs out into a glass. There were some things in the dregs. I know that there should not have been things in there but when kids cook they improvise and I thought he may have put in some lemon pieces or ginger.

I peered into the pitcher. At the bottom was bacon. 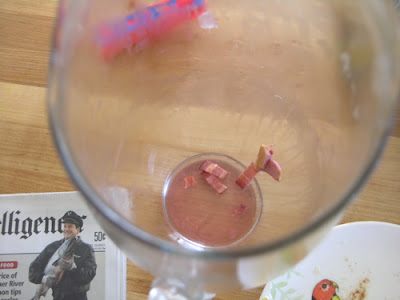 It was cooked and sliced bacon that looked like the stuff I gave Wren for breakfast a few days ago. Methinks he took the opportunity to slam dunk some into the lemonade while my back was turned.

I felt a bit ill looking at it. Not that I have anything against bacon but I don't take mine stewed in lemonade for days.

Here it is for your viewing pleasure.
Posted by Shannon at 12:52 AM 1 comment: