Tomorrow afternoon Wren is scheduled for his Synagis shot. I have a tube of prescription cream from our pediatrician which is to be used an hour before the shot so it does not hurt.

The information I received from the pharmacist was "apply 1 hour before the shot".

I read the online instructions and it appears to be more complex. I am to apply ONLY to the spot that will be used for the injection. I should apply a dollup and then seal the area with an occlusive dressing so Wren does not mess with it. I should not allow the medication to be in contact with the skin for more than 4 hours - so effectively once the time for the shot comes I should wipe it off and clean the site so the cream is removed.

When can I apply the damn cream?

I guess I should try and get him to nap early, ask the nurse to confirm her arrival time around midday and then put the cream on based on the most current information. I also need to aquire a big bandaid that seals a bit better than our scooby doo ones.

Its only goose poop

Last Saturday I dragged Frost and Wren out birdwatching at Union Bay Slough. I took Wren there a few weeks ago and have since decided Frost should be required to come on semi-family outings [semi-family is when I take the kids out] rather than hanging at home while Daddy gets his 9 hours after "I went to bed at 3am" shut-eye.

This has proven to be a great success and would have been even better if I had dressed Frost myself rather than allowing him to follow his own judgment. For both outings (to Farmers Market and Union Bay) we have had to return home prematurely to avoid death due to hypothermia. Last week, Frost did not bring gloves, a hat or another layer under his coat and I had to patch him up with my own fleece vest, a spare hat I found in the car and one Little Hottie hand warmer.

I let Frost use the binoculars to find birds and at first he found it very frustrating. He yelled:

Damn it. This is impossible. Its like trying to point a Wii remote at a bird!!!

After a while he finally saw the bird which Wren had been yelling at too. Wren was yelling:

It is him. Redwingbackbird. There is it! 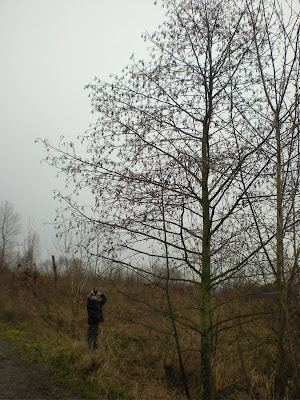 "Its like trying to point a Wii remote at a bird!"

We walked around the trail to the waterfront where we saw 100s of over overwintering birds on Lake Washington as well as a group of 5 or 6 trumpeter swans. They were pretty hard to make out with our small binoculars but we chanced upon a birdwatcher with a Leica spotterscope who lowered the tripod almost to the ground to let Frost see through. With his equipment we could see the black beaks and glide of the swans among some Canada Geese. The birdwatcher was very excited as were some women cyclists doing some off-roading who also came over.

Frost was quite exhilarated with binocular use after getting some practice. I explained that birdwatchers were like spies - they had much of the same equipment (spotterscopes, binoculars, microphones and notebooks) and had to learn to be very sneaky and creep up quietly to see birds. He set off alone a great distance (which is where Union Bay Slough is great for kids - it is so open that they can go a fair way off alone without the parent freaking out - to stalk coot. Wren tried to follow and became bogged in the watery sedge so I had to recover him but despite some conflict over use of binoculars everyone had fun and felt important. 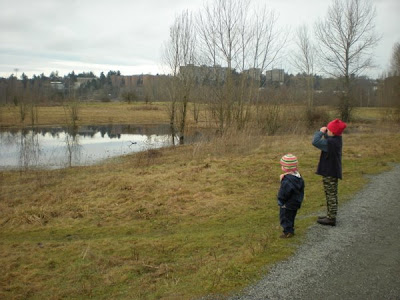 After stalking coot Frost and Wren observe a little pond.

I have worked out a technique for using binoculars. You find a MARKER. Like I see that gazebo over there and I find it and I know the birds are below the gazebo so I look down and find them.

I congratulated him and said that was exactly what adults and professionals do.

We saw the following birds without even trying to do any identification or sneaking: Canada Goose, Great Blue Heron, merganser, trumpeter swan, coot, bufflehead, red-wing blackbird, robins, northern shoveler and a large hawk. 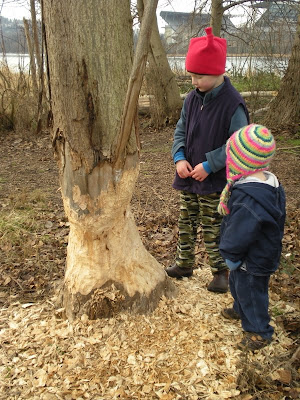 Frost explains to Wren about beavers and says they are "very lucky" to find this tree almost eaten up.

Wren and Frost both saw a beaver-gnawed tree which Frost considered a rare find. They were both concerned by the abundance of goose poop in the grass. At times, Frost refused to walk for fear of stepping in the poop and Wren stopped from time to time to ask:

What is this stinky stuff?

To which I had to give the reassuring answer of "its only goose poop". 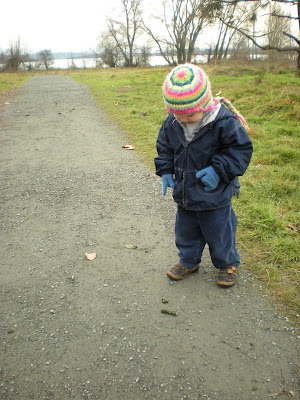 What is this stinky stuff? Asks Wren while examining goose poop.

Posted by Shannon at 8:40 AM No comments:

Hairdressing "in this economic climate"

My hairdresser let me go home like this today. Its called The Express Service and costs half the price for foils or a color. I love it. He did a cut AND color in 45 minutes and saved me time and money. I got to catch up on Top Chef while eating lunch on the couch with my glam look before my "ting-ger" went off for TIME UP and I washed it out. 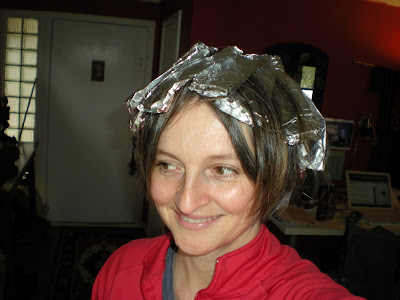 Joey said he doesn't do The Express for people who want "a radical change in style" or "for timid people" who might be "anxious" washing it out themselves but otherwise its a great option.

I like the color now too and I like not having a blow dry. I have always thought blow dries should be reserved for brides and television appearances but that is because I see no point in looking super sleek for 30 minutes when I don't blow-dry at home. The real test of a Mom in the Trenches haircut is that it can drip dry and still look super.

EDITED to add the AFTER shot. 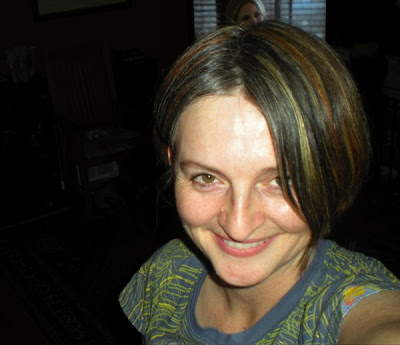 One of the best online communities for discussion of CHDs is the TCHIN List - called PDHeart. You subscribe and receive emails as singly or in a digest. The list is large and at times busy but I learn a great deal from other families, many of whom have older kids who have similar issues to Wren's. Of course, there is misinformation so I try and check our things which come up.

This week, an email came through my inbox about a girl who has had surgeries like Wren's - a thoracotomy repair of a coarc and a midline sternotomy for sub-aortic stenosis. She is now 14. Her mother shared that she has recently been diagnosed with scoliosis:

I took her to a Scoliosis doc on Friday, and they very calmly told me thatshe has non-rotational non-idiopathic scoliosis (10% upper and 20% lower in the
oppositedirection ) that's a result of her heart surgeries.

They told me that about 35% of the kids that have heart surgeries develop scoliosis.

I'm very frustrated! No one told me to watch for this! ... I have never seen this in anything I have read about CHDs, and...I feel that if I had known about this, we could have kept it from becoming this bad. [When] she goes back to her cardio ...I intend to ask about it then, esp.whether it really affects this many CHD kids. Its a specific kind of scoliosis - shifting out to the sides, not twisting of the spine.Apparently it has something to do with scar tissue restricting upwardgrowth of the spine.

I know that Izzy has scoliosis but I thought that might be something to do with Phaces, not OHS. I will be asking our pediatrician to look into this but meanwhile, has anyone else heard about this association?

The kids have been doing climbing as a school activity this month. Last year during this rotation Frost climbed about 5ft off the ground but he has been far bolder this year. He asked me to post some pictures of him climbing the wall last week. He wants Granny "and all the blog people" to see how high he climbed. 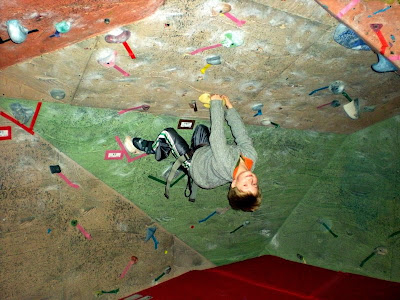 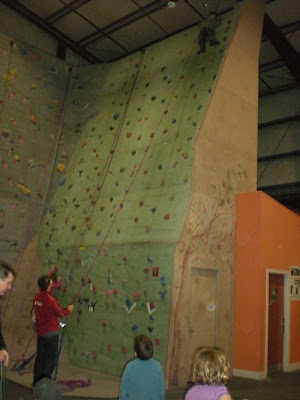 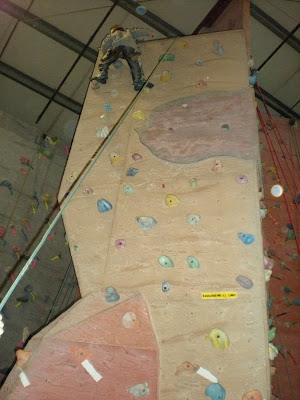 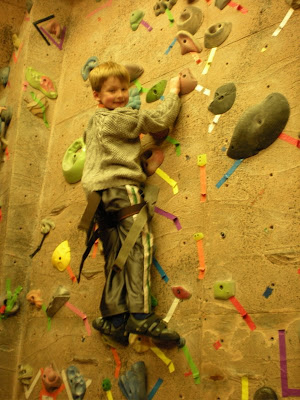 Frost has not been doing so much climbing out of the gym but he loves to throw his body into jumps and leaps and obstacles. Its amusing to watch Frost moving around U-village - it reminds me of footage of parkour where people move through the city environments like monkeys. He leaps off walls, crawls through bike stands and swings around trees. Wren has noticed this and copies him - kicking bushes, hopping and ducking under and around fences. I should film them sometime.
Posted by Shannon at 3:59 PM No comments:

The Endless Fascination of the Zoo Penny Drop

At the end of our zoo visit yesterday Wren had 20 pennies to roll down the penny drop at the East Gate. He spent a long time sending them down.