"Have toothbrush, will travel"

Wren's obsession with the toothbrush has continued. When I get back this afternoon I will be able to post a picture of Wren taking the toothbrush with us in the car because his loss-of-toothbrush tantrum made it worthwhile. As I drove the kids to the thrift store our drive was punctuated by "BZZZZZ" [silence] "BZZZZZZZZZZZZZZ" [silence] as he played with the on-off switch. He would not leave it in his carseat while in the store so I had to keep watch on him to avoid losing it. I was also looking for a chance to 'vanish' the toothbrush but Wren kept a tight clutch on it so that was impossible.

Here he is travelling in the Sedona with the toothbrush: 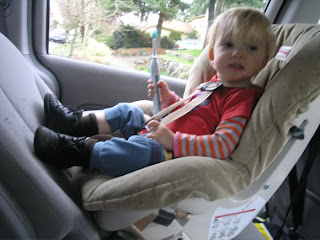 And he insisted on taking it into the store with us too: 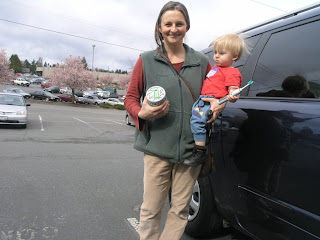 That afternoon we had the "no, you can't mop the kitchen" conversation after he opened the broom closet and brought out the mop. He also dragged the mop bucket to the kitchen and cried and cried when the mop handle kept catching on the cabinets and did not move around like it does when I mop. Later, I locked the mop up and he lay and wept plaintively and loudly outside the broom closet for a long while.

Later still, I put water in the mop bucket and showed it to him then became distracted and left the bucket in the kitchen. He took out the mop and put it in the bucket then dragged the wet mop across the living room to ask for help in mopping.

I offered him the smaller kids mop and bucket but it is not the same model and he is not interested in it.

He loves to copy things I do and yesterday I found him dipping toilet paper into the toilet. I know that is not something I do exactly but the older people in the house seem to have a relationship with the toilet and he is not quite sure what it is.

When he finds a wet spot on the floor (dropped water, bath splashing, dishwasher emptying, pee) he gets a rag out of the kitchen drawer and wipes it up himself saying "uh oh, uh oh" all the time. He is very worried about wet floors because he has learned he often falls over on them.

I have just put Wren to bed, still clasping the toothbrush. I guess we have to use our old toothbrushes tonight.
Posted by Shannon at 3:29 AM No comments:

"Don't put my toothbrush in your shoe" (and other family arguments)

Wren has started to have tantrums when his will does not prevail. It started with the electric toothbrush at bedtime. One evening I allowed Wren to hold the electric toothbrush while I cleaned his teeth. After his teeth were done he did not want to let the brush go so I allowed him to take it to the bedroom where I managed to dress him holding a toothbrush in his hand. Then it was time to nurse so we lay down with the toothbrush between us. He hit me on the head with it. I took away the toothbrush and he started screaming and thrashing about. He nearly head butted me. I put him in the crib because he refused to nurse. He screamed for 10 minutes. It was bedtime and I had no idea what to do so I offered him my 'analog' toothbrush. He liked that. He explored its bristles and sucked the handle then settled down to nurse holding the brush. I put him in the crib with it and he let it go as he went to sleep. Argh!

His tantrums extend to even more impossible things. Things like riding the exercise bike and using a laptop computer. He stands by the exercise bike and points and says "UP UP UP". When I say "no" and do not lift him up to sit on the seat as Frost does he throws himself face down on the floor and cries and screams. Likewise if I do not allow him to sit at my desk and thump my laptop (the 'e' key has partially broken off from his usage).

I am a firm believer (if not practitioner) in positive discipline so I am trying to frame my parental requests in a collaborative way. I suggest that he plays with his toys instead of the electronics but he does not agree. Also, when playing he throws hard and heavy objects with the same enthusiasm as we throw balls. This has led to exciting statements such as:

Frost has received a number of injuries due to Wren hitting him with thrown remote controllers, wooden blocks, shoes etc. It is partially Frost's fault as he lies transfixed in front on the floor while watching TV and does not react in time to avoid impact. Still, Wren has also managed to headbut me on a few occasions as he throws a tantrum about being shod, or dressed, or fed or something else.

He is charming most of the time but he has a real will on him and I don't remember Frost being this demanding at this age.
Posted by Shannon at 1:39 AM No comments:

Children's Tylenol - why do you have to use their cup?

This evening Frost developed a fever. At first it stayed low - around 100.5 - but by 10pm it had risen to 102.8. He was moaning as he tried to sleep and felt very warm so I decided to give him some Children's Tylenol to help him get some rest.

We have misplaced the cup supplied by the manufacturer. It went into the wash after the last round of diseases and it didn't find its way home to the medicine cupboard. However, I have many measuring tools from the days of Wren's oral medication and I happily measured off 10ml for Frost to suck up with my oral syringe.

That's when I noticed the big warning

"Use only the enclosed cup to give your child Children's Tylenol Elixir or Suspension Liquid. Tylenol products have been specially designed for use with the enclosed cup"

Does anyone know why or how? Do other measuring devices give wrong readings? Is 5ml of Children's Tylenol not really 5ml?

I started reading around a bit and found that people who are not medical professionals tend to measure things rather erratically and that measurement accuracy varies by method.

"CONCLUSIONS: Droppers and dosing cups were the most commonly used devices in the home for measuring liquid medications. Subjects were more likely to measure an acceptable dose with an oral syringe when compared with a dosing cup. However, a large proportion of study participants were unable to measure an accurate dose with either device. Community pharmacists should educate caregivers on the selection and proper use of measuring devices to improve the accuracy of medication administration in the home. "

As this study finds - in general the level of accuracy with a cup is less than with an oral syringe. So, what is it about this magic cup? Have they taken account of the viscosity of the liquid and taken into account the amount usually left behind when you drink from the cup? If so, shouldn't they caution the adult not to let the child lick the cup clean? Not to scoop or scrape every last drop from the cup?

I am just confused and need more information to know how to recalibrate my oral syringe to delivery the correct dosage of this product.

Frost is doing ok and is now asleep in bed. We will check on him overnight and hope that he feels better tomorrow and that Wren does not sicken with our latest scourge.

Posted by Shannon at 3:05 PM No comments:

During Mum's last visit we went up North to the Upper Skagit area so Mum and Frost could go on a Bald Eagle watching raft ride. It has taken me a while to upload the pictures but here they are. In the first shot, Mum and Frost are about to board the bus from the meeting area to the launch site. The bus had a large black fin on the back in honor of its name Orca 2. At first, Frost was worried that I was not coming with him. He was also upset about all the layers of clothing he was being asked to wear. Frost does not like scratchy or hot clothing so he wore it on condition he could take it off if he became hot. 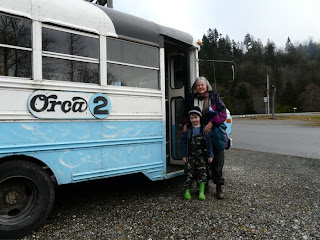 As you can see from this picture of the scenery. It was not exactly hot country. The river was snow-melt and there was still snow on the ground in the shade when we went upriver from Concrete. 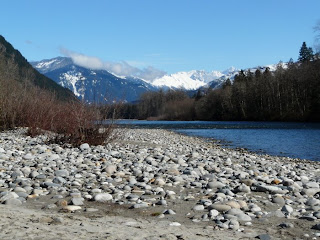 Here are the "raft" crew on a tea break by the river. They saw about 10 eagles during the trip although it was not peak season. 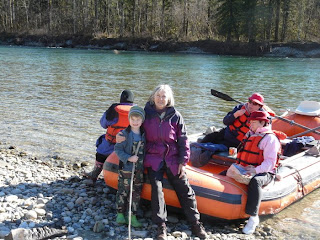 Frost was very happy to be the lookout and called out warnings when he saw white water or anything significant. I only found out after the trip that he was not fitted with a child lifejacket. This one would not have been any good if they fell in. I have often said that if we travel to Indonesia with the kids we will take our own life jackets. That was since the leaky creaky fishing boat trip I took into the deep ocean with no form of life preserver on board. One motor was swamped, the swells were heavy and I was estimating how long I could float before I came within sight of land. Frost did not seem to face these anxieties on the trip although the water would have been a lot colder here. 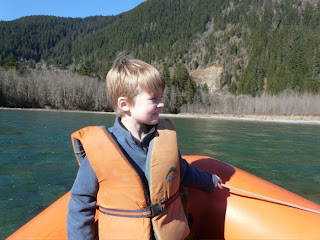 Ah, an eagle. The greatest concentration of eagles was at the dam runoff where salmon are often killed being churned through water turbines. The eagles gather to eat the remains. We saw 5 eagles at the dam wall. 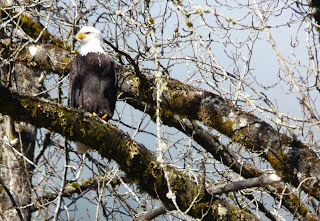 After the trip, Wren and I met Frost at the downriver landing. Frost is holding Wren back from entering the river as he searches for stones to throw. 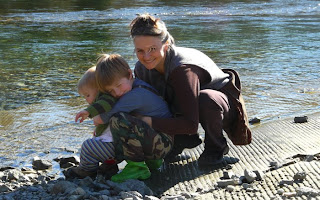 Here the boys are throwing stones together. 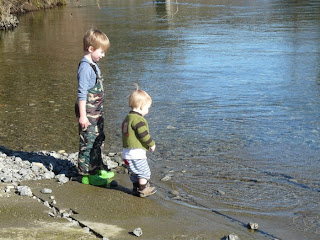 We have a minivan, candy and a golden egg

After a mammoth visit to the Kia dealer we are the exhausted owners of a 2006 Kia Sedona. It is dark blue and has done 18K miles. It is a bit scruffy but will be detailed next week.

Meanwhile, we are enjoying the space and views from all windows.

After a ridiculous offer and a more reasonable counter-offer we declined to trade in our Subaru Outback Ltd. So, if you know someone in the market for a 2002 Outback with leather seats and relatively low miles then give us a call! I am going to get the moonroof serviced this week and try and fine a tame detailer to save Wren from living in the garage while I tend the car.

This evening Joshua asked not to talk about cars. He had to wake up early (for him) to get to the Easter Egg hunt at the community center and is now napping on the couch. It was a fun time hunting for eggs and Wren enjoyed eating chocolate. Frost enjoyed racing other kids for eggs filled with candy. Also, he managed to find and grab one of 3 "golden eggs" containing tickets which could be redeemed for an easter basket with a few bags of candy and a toy in them. He was thrilled to get a golden egg and said it was one of the best things that had ever happened in his life.

Unfortunately, I have no pictures of the Easter Egg hunt because I used the video camera. I do have some great footage of the Joy Of the Golden Egg. Pictures of the minivan will follow.
Posted by Shannon at 1:05 PM 2 comments: