Confessions of an Omnivorous Vegetarian

Thesedays, most families have some food issues.  Someone has an allergy, a preference, only eats potatoes, only eats veggie burgers, is gluten-intolerant or overweight, is underweight and that's not even going into the question of the provenance and eco-ethics of your food choices.  This is the cast of my family drama:

I have only been a true vegan for about two years in my twenties.  I didn't have much money and near the end of that period - waitressing for a kosher Jewish wedding caterer - I would shove potato piroshki's and herring in my mouth with one hand as I walked through the tunnel from the commercial kitchen to the function rooms.  I felt that food that 'fell off the wagon' so to speak, was not my contribution to the political nexus of meat production and since there was nothing edible in the fridge at home I would probably have eaten dumpster meat too, if somebody suggested it.  After that, I was vegetarian for about 6 years.  Really - and I recall developing some meat aversion during that time.

Even so, my share house was very ETHICAL.  These were animal liberationists who would go off in the night to 'free' pigs but who still kept meat in the fridge for 5 or 6 refugee cats because cats were by nature carnivorous.

That's how I feel about Wren.  He is clearly a carnivore in sheep's clothing.  Sweet and sensitive, with a porcine aortic valve, you would think his heart would reach out and refuse to eat animals but he is quite emphatic that he likes to eat meat and he will eat it even if I call it COW and PIG and CHICKEN.  Since he was 4 and ate all of Grandad's bouillabaisse - cracking crab legs and pulling clams out of the shell, asking "is this the foot?" before eating it - I have realized that he can't help it. So this is how it goes in our house:

This morning, Wren (6) was watching Yogscast but instead of a minecraft video he was watching a cooking show.  He told me it was "cooking with Duncan" and he had watched it a few times.  He says he was learning how to cook a steak and he would like to do it because it looked delicious.  I agreed it would be interesting.  I cannot recall when we last cooked a steak.

So off we went to Whole Foods and bought the best (aka expensive) grass-fed, level 4 cruelty free (aka the only bad thing in your life was being killed for me to eat) level cow.  The man behind the counter told us it was the best steak so Wren chose that one.  I supported him because I am of the brand of guilty vegetarian omnivore that believes that paying a lot for dairy, meat and related products is a penance as well as increasing the odds of better standard of living for the livestock.

We also bought the ingredients from the Youtube video:  "I need PORT" said Wren as we wandered through Whole Foods... "and salad!"  "Do you have brandy?  And "we need SINGLE cream not whipping cream."  We had a long debate over the color of the sweet potatoes.  The English variety on the video were yellow on the outside but orange inside.  Here in the USA we have only red and white varieties.

We came home and started preparing.  In the excitement of cooking from Yogscast, even Frost (the vegetarian) got involved.  In the midst of the steak smoking, the conversion of Centigrade to Fahrenheit for the oven 'chips' and the drama over how to saute the onions Frost said "don't worry about heating my veggie soup, this is a bit stressful and I don't want your steak to burn."

I cut it in half after resting and Wren said it was delicious and I couldn't have a taste.  He actually pointed his knife at me an growled with a mean voice "Not.one.bite."

Frost and I ate canned soup with our chips and salad.

Josh ate about half of his steak and left it on the plate saying he was full.  Beezle waited as I scraped the plates and ate the gristle / fat strip on the edge.  Wren had eaten 3/4 of his half and then he too was full and done and talking about what to cook next time.

There I sat like a seagull watching children spill chips on the boardwalk.

Juicy $24.99/lb steak on the plate, unattended, left for clearing - And.cream.reduction.sauce.  Guess where this is heading?  (The same place it headed a month ago when Fred brought lamb chops...)

Lets just say that there is none left now and until I can remove meat from the area this is how its going to be.  I can't resist the gnaw and grist of it.

Frost has suggested we make a nut roast with vegan gravy for our next family cook dinner.  I expect to be a vegetarian on that occasion.
Posted by Shannon at 1:04 PM 1 comment:

After 86 days of summer holidays and well over 2000 miles in the car, it has come to this - the last two days before the kids return to school.

Frost is lying on the couch shouting "I am just sleeping" while Wren bashes him on the butt and head with the handle of a plastic dwarven axe saying "UNCONSCIOUS ELECTROCUTE" and making zzzing noises to the sound of a song I don't know.

I have just fed them lunch while I am fasting - a singularly sacrificial act.  They had to eat their sandwiches, fruit and lentil soup before getting root beer float.  The root beer is one of the last vestiges of summer largess - evocative of the sunflower-yellow 80-degrees of sunshine yesterday when we ate corn soup and apple crumble made from fruit we harvested at Cave B's orchard.  It was so hot we covered the windows with a quilt and squinted at the sun until it dipped towards Phinney Ridge and the evening of growing shadow.

This morning we woke to the sound of rain and the newspaper came in the plastic sleeve they use only when wet weather is forecast.  The lotus flower rainchain burbled with runoff from the gutter outside the kitchen and the grasses that had grown long and leggy fell sideways over the path.

While they ate lunch Wren asked Frost "What is your favorite food?" and Frost asked "In real life?"  There was a pause as he considered the alternatives.  "No, in Guild Wars..."  If you buy food in Guild Wars the food gives you 'nourishment' which confers an effect such as flight or speed or healing.  Frost says his favorite food is super high level lobster which gives you a ton of health and swiftness for a long time.  The cheese and lentils seem to have conferred plenty of swiftness on Wren but Frost has to be kicked outside to play with Wren in the slippery grass after his couch collapse.  I doubt the outdoor sojourn will last long.  Through the open patio door I can hear Frost tormenting Wren by singing a single repeated word in a staccato monotone while Wren tries to engage the rules of their axe-swinging game, screaming "FROST, FROST, FRRROOOSSSTT!!!" right into his face.

"Sorry, Wren" Says Frost, snapping out of it and kicking off in the swing for distraction while Wren orders the game - describing "bush backs" which are a monster he has imagined, like tree ents but evil, and how they must engage them.

This morning, Frost had his screen time while I worked and Wren was required to play by himself for an hour.  The hour can be broken down into these phases:

Crying [I want you to play a board game with me.  I have nothing to do]
Response: I am not going to play with you.  You are going to find something to do yourself.

Crying face down in red chair in kitchen: [blame and guilting]
Response:  I am going to shut the door.  Here are the things in your cupboard now figure it out.

Crying:  [I am so embarrassed because you are going to love the thing I made]
Response:  Okay.

Wren runs away then comes back with cautious monitoring of my response.

It turns out Wren spent his hour making coffins from shoeboxes.  They are dramatic gloomy things which are entertaining but hard to consider without smiling.  You must not smile and you must be able to read his pidgin english first time.

The shoeboxes are called DETHS LAST WRDS and LIFS LAST WRDS.  They are opened with a symbolic key Wren wears around his neck on a chain.  Each contains a poem as follows.  I have translated from pidgin for you and included the original for flavor.

Death's Last Words.  (Keep Out)
The world of darkness
grows and then
the hand of death
and souls fly around in
dark and death.

Lifes Last Words
Life is gone
Hope is gone
All lights are dark
Hope's times
are over. 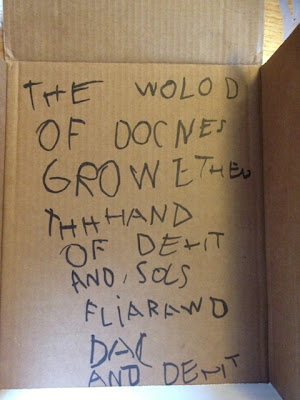 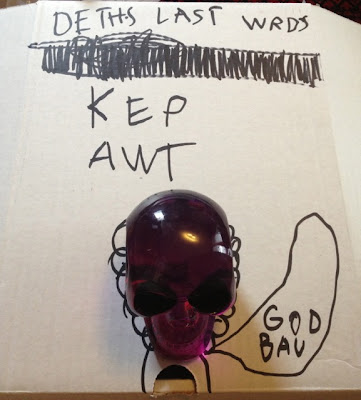 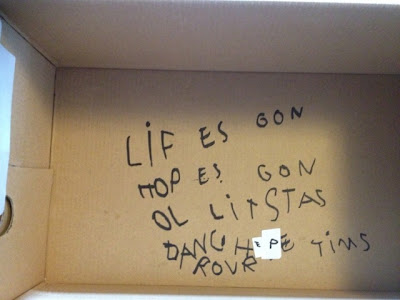 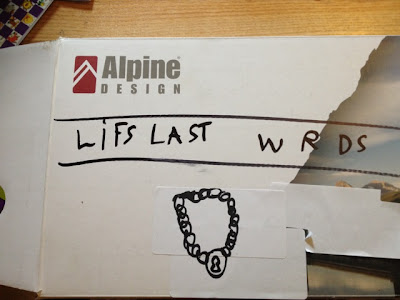 Apparently, this is how he feels when I work and nobody plays with him.  I think we could rework these into a dirge for the end of summer.  In case you are worried, both boxes are empty.  There are no dead cats or stuffies or anything although the bedroom is a mess. 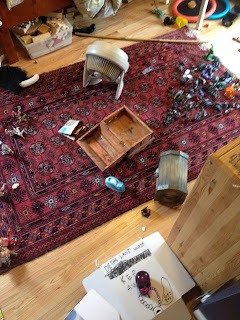 The living room is a mess. 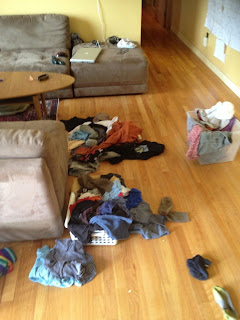 Holiday travel bags are not unpacked. 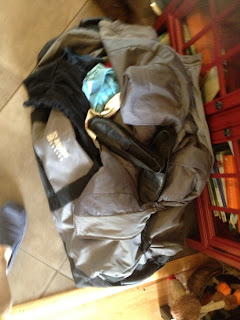 The fridge is overstuffed with Summer Food and BBQ leftovers.

My plan is to begin to clean today and play some board games.  We have the back to school picnic tonight along with the orientation for new parents.  I am supposed to read and inform about a list of tasks and responsibilities that new parents will assume when school starts - cleaning up after lunch, finding the emergency backpack and supplies, turning up for their workshift.  Really, I will tell them, it will all be a breeze after summer.  Its like the cube root of summer halved.  Back to school time is when we get to be the good guys again - the happy one they come home to, who writes little notes in their lunchbox, who appears early for pickup, who helps with homework.  The times of forced backyard fighting and screen time blackouts and root beers delayed for cheese sandwiches and, god forbid, shutting you in your room to play alone - are OVER!

Wren rushes in screaming.  Frost comes thudding after him, mock cursing.  They have been whipping each other with the long tendrils I pruned from the wisteria.  Frost runs out the front door.  Wren runs after.  Frost doubles back and Frost locks Wren outside.  Wren thuds at the glass, waving a ti chi sword, perspiration beading his lip.

Ah, we have had a good run of summer, of fight and freedom but roll me a pumpkin Mr Summer!
Vivre la Fall!