We spoke to his primary cardiologist last night and have a reprieve on intervention.  Basically, he said that in young children who are too small for the smallest adult size valve replacement the decision on when to intervene is a matter of balancing risk.

The risk of any procedure on a child who has had multiple surgeries and caths vs the risk of an "adverse event" due to the untreated stenosis.  Adverse event = passing out or having an arythmia / heart attack.

Apparently, the risk of 'bad things happening' doesn't increase suddenly once you reach the threshold for critical stenosis.  Instead, its a steady increase.

However, there is no cure for the AS that is either permanent or risk-free at this age.

So, we get to make a judgment call balancing the risk of leaving the AS to progress vs trying a cath on an aortic valve that is already bicuspid, has had prior caths, has scar tissue from OHS repair and sub-aortic resection.  OR going to OHS for a valve replacement that in itself creates a more difficult replacement event in future.

We have decided to wait 6 months (and make an overseas trip) with our friend the critical aortic stenosis.

I asked if it was crazy and the cardiologist says he thinks that will be fine.

We checked heart wall and heart size and its only minimally enlarged so apparently that is reassuring as they would not expect sudden changes in 6 months at this age.
Posted by Shannon at 1:39 AM 1 comment:

I am drinking carbonated pomegranate juice, from France, orzo salad, sushi and some pesto.  Wren has deviled eggs, sushi and madelines.  Josh has a Metropolitan market caesar salad.  If we can't kick this heart defect at least we can kick back and enjoy some fancy victuals.

To cut to the chase - Wren's first cardiology clinic in 15 months had mixed results.  It could always be worse but his aortic stenosis appears to have advanced from moderate to critical.  Critical is 50+ gradient over the valve.  His was 55.  Last appointment it was 45. 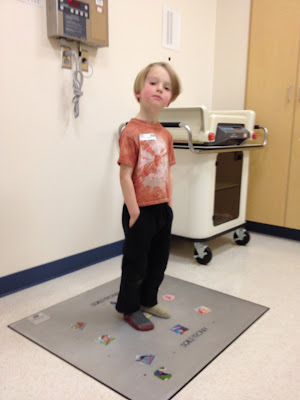 Now, that is where the clarity ends.

Dr Conwell was very amiable and calm.  He said:

Actually, he said that he will review with our primary cardiologist and look at the images again to judge if this is a genuine increase or an anomaly due to angle of view.   He will call us within a week or so to discuss what they think.

They want 24 hour halter study data - Wren is wearing the halter now.  It is a set of electrodes stuck to his upper body to measure his EKG all day.  This is because Wren has left bundle branch block as a result of his last surgery - the electrical impulses are already a bit abnormal because of the damage to the bundle.  They want to know if the damage was more widespread and would indicate the need for a pacemaker.   This is not really a new thing, but if Wren needed surgery they would want it put in at the same time.

They did some chest x-rays to see if his heart is enlarged.

We will get some results back in a few weeks from the halter test, which will last until tomorrow afternoon.   Josh is teasing Wren that he is like a robot.   The nurse told him he is like an astronaut because they have to wear them all the time they are in space.

IF it seems the numbers are raised, we will repeat the echo in 2-3 months and also present to the cardiology conference.  He suspects they would recommend a cath lab intervention to try and open the bicuspid aortic valve leaflets further.  Other than a replacement, the cath lab might work as well as open heart surgery for this repair - he says.

I would want a second opinion from Dr Hanley's team and have said this.

We are disappointed but not reacting too much, yet, as there seems to be a lot of vagueness in the air.  Something bad is suggested.  Chocolate pudding is indicated.
Posted by Shannon at 10:49 AM 1 comment: