Cultures Back - Strep A

The cultures from Frost's nose came back positive for Group A strep. The pediatrician said that they were very high and we should be sure to use all the ointment. I said "ointment"? Turns out we were supposed to be using the antibiotic ointment as well if the sore in his nose hadn't improved by now. So I went out and bought it and now Frost has extra medicine and should improve more quickly.
Posted by Shannon at 11:07 AM No comments:

When he bites my finger Wren now has sharp teeth above and below. He has 4 teeth you can feel. I suspect he is still growing the ones on the opposite side but yesterday was the day for those upper ones. Once again he had bloody saliva from the gums bleeding and had lots of Tylenol for the past two nights.

He is now asleep and I was so tired I had a morning nap for the first time in ages. I seldom manage to fall asleep at 8am but today it was easy. I would still be asleep but for Frost creeping in to show me a lego creation.

Frost has been on antibiotics 2 days and his finger is much less red and painful. His nose is still sore.

He is still not at camp but enjoying having gauze all over his wounds.

He has decided to dress up as a mummy or as a wounded scary person for Halloween.
Posted by Shannon at 2:08 AM No comments:

Impetigo, falling over and maybe a fever?

The day unravelled fast. Last night I made an appointment for Frost to see the pediatrician. I was concerned about a small cut on his finger, a string burn actually, which looked infected. I noticed his finger was swollen and the graze, which was almost unnoticable at first, looked pussy. Also, there was that telltale red line on the skin. I was also worried about his "sore nose". He's had a cold for 3 weeks and the past week it has been joined by a reddened crusty nose. This reminded me of Laines description of Nate's nose when he had Impetigo a few years ago.

Anyway, we headed out to the pediatricians. I nearly missed the appointment. Wren was overtired, our appointment missed the schedule. Turns out Frost has impetigo and probably infected his finger cut with it. She suspects he has a impetigo (usually strep or staf infection) which has spread to his finger and perhaps the tissue. So, he has been given a strong dose of antibiotic over 10 days. We have to keep the skin clean and covered. He can't return to camp on Thursday or Friday.

Wren felt a bit warm so I asked the nurse to take his temperature and he is mildly warm - 99.8. Still, he has no sign of skin infection so I hope its just the teeth or something.

Next thing, we head to the pharmacy to get the antibiotics. I am in a daze of exhaustion and worry about Frost and Wren and Wren is trying to nap and is a mess and hot and I am hot. We eat candy. Its good. We obtain the medicine (after the pharmacist freaks me out by saying she checked the prescription because he is getting a relatively heavy dose of antibiotics - more than required for impetigo. That's when I mention the finger too and she nods and says the doctor is trying to do two things with the medication (hit the finger infection and the superficial nasal one).

We leave and I hear a THUMP and silence. Frost has fallen flat on his face in the parking lot. He has nasty bloody grazes on his infected hand and a grazed and bleeding knee. His Nerds are spilled on the pavement like blood splatter. Its gruesome.

I put Wren to bed, washed Frost off with Detol and polysporined him. Now he is lying on teh couch lapping up the attention.

I am not sure what to worry about next. I am so full of adrenaline.
Posted by Shannon at 8:52 AM 1 comment: 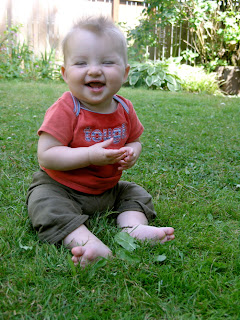 I have been saving up pictures on the camera so I have a few from the last week. First, here is Wren smiling and showing off his two lower front teeth. The upper front teeth are cutting through right now (amid much gnashing, gnawing and wailing). We should have a stake in Tylenol Inc. and Orajel with the amount we use them at night.


The next (below) is Wren rolling about the livingroom floor yesterday. He moves from one side to the other using various techinques. He rolls, he rotates using his arms, he pushes up into crawling and rocks and he pushes iwth his arms and moves backwards (a little). He always ends up wedged under the coffee table and has been knotted in the playstation controller cables a few times. He also finds small things concealed in the vivid design of the carpet and tries to use a pincer hold to pick them up, but fails. He keeps trying. This morning he found a piece of lego and the base for a Warmhammer miniature. 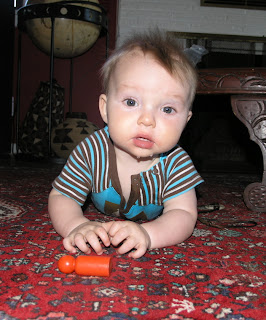 Now this one is all blurry because I had to fumble with my camera to get the picture. This is the first time Wren pushed himself up into crawling position. It was yesterday. He has done it many times since and is rocking back and forward on his hands and knees. He conks out pretty quickly but he gets up again. He is working on stability. A few times he pushed forwards and make a little jump with his legs. He seems to have the idea that his hands can move but hasn't figured out how to advance his legs so he is trying things out. 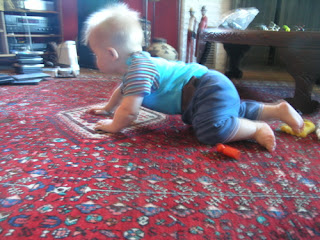 Now, my question of the day. It is addressed to parents with 2 or more children. Do you make new adult friends 'through' your second child's relationships or does your second child just go along with the family friendships that developed as your first child grew up? I am feeling like spending more time with babies and other families with babies but I never manage to make it to baby group meetings or activities or to catch up with my new friends from Listening Mothers. I feel a bit sad. I am always rushing along with Frost's activities and fill in the few social blanks with friends of Frost-in-common.

Should I make more effort? Do I need to find families with 2 kids one of which is 5 and one a baby? It seems a far smaller set for seeking out the sympatico.
Posted by Shannon at 4:17 AM 3 comments:

Baby and the Beast 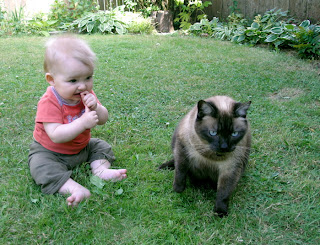 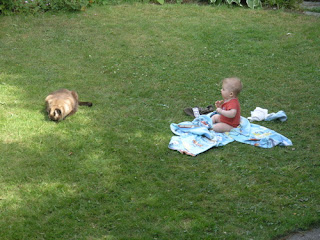 Wren has moved on from the infant appreciation of black and white and primary colors. He is now interested in all things CATS. Since Joshua allowed Wren to "pat the kitty" and he gouged out a fistful of fur, he has had keen interest in our surviving pets. Joshua has helped him stroke kitty since then and we are careful to keep him out of lunge of Kitty Kasharoo who might actually bite him if he pulled out her fur.

Kitty Haiku is more longsuffering and has been molested a few times on the bed.

Last weekend, Wren had a rare experience to see the kitties in the garden. They normally run a mile when they see him but I had been lying on the grass next to him and they couldn't resist the chance for a petting.

So, here is Wren with Kitty Kasharoo just out of range and then some distance off.
Posted by Shannon at 12:52 AM No comments:

Yesterday, Wren was rolling around the carpet and rolled up next to the coffee table. While i was talking to Frost (both of us sitting right next to him) he reached up and tugged the edge of a magazine that was protruding over the edge. A cold mug of tea was sitting on the magazine. As he pulled the magazine off the table the mug toppled off and onto him... covering him in cold tea.

I leapt to stop it but it was all in slow motion and I couldn't catch it in time. So, it was a serious accident averted simply because it was cold tea.

Wren was shocked. Frost was rushing to grab a towel and everyone was a bit stunned.

Babyproofing has been moved up the agenda especially with the news that this morning Wren managed to lift himself onto hands and knees many times by himself! It is tenuous, but he has the idea.
Posted by Shannon at 3:21 PM 4 comments:

I checked Wren's mouth again today because he's been a bit sorrowful during the day. I was surprised. The pink spot on his lower gum is still pink but one of his upper central incisors is cutting through! There is a little whole and the tooth is in there.

Oh, and as if is that isn't enough, the tooth next to it is coming through too. Its called a "lateral incisor" on the tooth chart.

So, he is forgiven for being cranky. I hope they don't get too bad as they really cut through.. its just the small hole and white spot stage right now.

We also went to a toy store today and bought a Wiggly Giggly ball for Wren which squeaks when you push it. He loves it. He sits and pushes it and gets very happy when you push it back.
Posted by Shannon at 1:15 PM No comments: