Today is Wren's 1/2 birthday. He is exactly six months old and at his six month pediatrician visit this morning the doctor said

"He looks like any other baby. He is doing just what he should be doing."

We feel very pleased with him. Here is a picture of him (taken by Frost) yesterday. 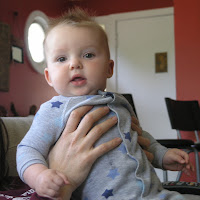 He is rolling from front to back and back again (although less so on the side that requires him to use the left leg), sitting, grabbing for food, moving toys from hand to hand, standing supported and just generally looking about for trouble. We have been told to babyproof our home as he should start crawling during the next 3 months!

Rattlemania
Wren loves rattles. This surprises me. We never bought rattles for Frost because he wasn't particularly impressed by them. Wren hangs onto rattling toys and shakes them methodically with one hand. If he drops the rattle he works hard (rolling, stretching, grunting) to retrieve it. Unfortunately, the rattle often ends up between his legs. If he fails to find it he chews his hands for a bit and then cries until it is returned. His favorite rattles are this ball and a duplo lego piece. I have a 2 minute movie showing Wren playing with his two rattles:

That Crazy Mohawk
Wren is very social and loves to stare at faces, especially new people. People also like to stare at him - at his hair in particular. His hair is very fine and stands completely straight up in mohawk. The pediatrician called it "stylish". More than one person has commented that he doesn't need gel. Its true. It keeps growing longer but it hasn't fallen over yet. It is especially erect after a hairwash. You can probably see the mohawk in this first picture on the floor chasing the rattly ball: 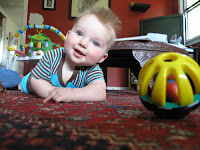 "Hey, where did that ball go?"

Teething
Wren has been having a hard time growing his teeth. The second tooth came threw 2 days before he turned 6 months and he has been very fussy and quick to cry during this period. Yesterday, after his nap, he had bloody spit from the gum bleeding where his tooth is coming through and he had blood on a cloth he was chewing a few days earlier. He is also showing signs of growing one of the lower incisors. We have been giving him Tylenol at bedtime which seems to help but he is not sleeping as well as before this period.

Sleep Update
Wren is still doing a lot better than before at night but he has fallen off from the glory days of early sleep training. We believe this is due to teething but it may take a few days of hard work to remind him not to wake and come into bed with us after 4am. Recently, he has had a lot of trouble getting back to sleep after 4am nursing so we have had him in bed and this hasn't helped my nights. He has also woken more frequently in the 10pm-4am period which he was sleeping through before. He is generally putting himself back to sleep on his own but it sometimes takes 45 minutes of silence and then whining, then silence, then whining before he is asleep. Last night he cried (shrieked) in a different way that sounded like pain and Josh rocked him back to sleep. So, there are bumps in the road but since he puts himself to sleep every night with little or no crying and does the same at nap time, we have come a long long way.

I feel this is long enough already so I will try and post some other shorter updates on Matters Wren. In particular, I want to mention our share in a CSA (Community Supported Agriculture) with Jubilee Farm. Here is Wren eating the garlic shoots we collected from the farm this week! 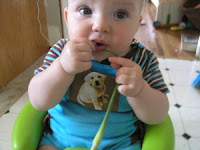 Before I head off to book and bed... I am thinking of Izzy who is facing airway surgery tomorrow for a hemangioma. I hope it goes well and she feels a lot better afterwards. Also, Ramona, who is having open heart surgery on Friday to repair an aneurysm at the site of her RVOT patch. Her family is hoping the surgeons can do a safe repair AND put in a shunt to improve her cardiac function as part of a staged repair for her serious heart condition. Good luck to both little ones.

Last week I was asked to clean the baby dolls at Frost's school. After they had had their baths I let Wren look at them. As you can see he was stunned. After staring at them with intent interest for a while he grabbed them and then started to chew on them.

Sadly, they went away and wouldn't play with him anymore. 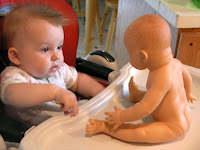 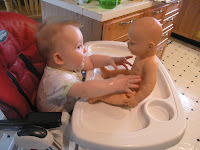 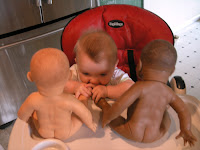