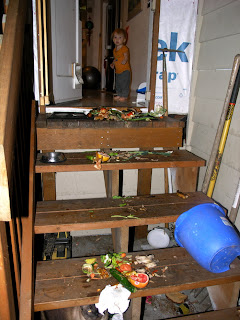 This morning Wren slept later and I felt much better. I needed that extra energy because when I opened the back door Wren and I were greeted with a great mess. Some noctural forager had discovered our compost bucket which I leave on the back step. The contents were spilled down the stairs. I put on my rubber gloves to scoop up all the rotting vegetable trimmings and one of the gloves was full of icy water. It was horrid.

In the picture you can see Wren pointing going "OOOH" when he sees the mess.

Wren still has a very rough sounding chest and has retractions off and on. He is not grunting and seems to have good energy and improving appetite so I am not too worried. Still, I am keeping him out of baby group for another week.
Posted by Shannon at 11:10 AM No comments:

Much better but not at night

Wren is very much himself today. He only coughs after waking and then he has a rattly chest for a short period. He seems to have plenty of energy. The doctor said it would take at least a week for the inflammation to subside but if I didn't know that he had it I would have said he just had the end of a cold.

This is not so for his sleep.

Neither Joshua nor I have a clue what is going on at night. It could be that he has become accustomed to nursing on demand through the night as I allowed him to nurse 2-3 times while he was having trouble breathing and we wanted to avoid crying. Now he throws a tantrum when he wakes and I refuse to nurse. In the end I caved and he nursed at 1am and 4.30am. Ugh.

I am getting quite fed up with his attitude to nursing. He is very demanding with his signing. During the day he follows me and signs MILK when he feels its time. If I offer another liquid or some food he gets very angry, cries, falls on the floor, grabs my legs and complains until I give in. If I do not give in he is a monster until he is distracted from the idea.

God forbid I should try and sit on the couch where we usually nurse. Even if its not a nursing time he climbs on me and signs MILK. If I refuse the whole tantrum thing is set off again.

This morning he had a good nap and is sleeping again now. I slept for over an hour this morning so I feel fabulous by comparison with the past week of sleep deprivation . I have been dragging myself through the afternoon like a wet sock.

Anyway, time to wake Wren so he gets to bed on time.
Posted by Shannon at 9:56 AM 1 comment: 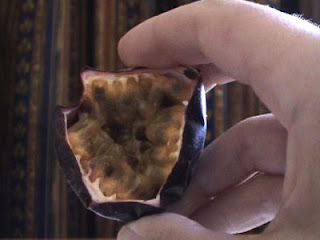 This post is for my Australian/South African friends and family.

Today, I was looking at the Durban Daily Photo blog I follow and noticed the prices of main dishes at the restaurant board in the picture. They translate to about $5-10 dollars per dish. By contrast, yesterday I spent $3.20= R23 for A SINGLE GRANADILLA!

It was a mistake. They were not priced in the produce section of QFC and they looked great. They felt heavy and were wrinkled. For the granadilla/passionfruit connoisseurs among us, that = delicious. I put them in the cart meaning to ask the price at the checkout but I forgot. I looked it up as I unpacked at home and nearly fell down flat. I ate both, immediately, so as to not be reminded of my folly.

Yes, they were fabulous.

Grandad Punchy used to have a tennis court at 137 Northway and the whole right hand fence was covered with a prolific granadilla vine. As kids we would climb the tennis fence to pick the purple fruit and eat many of them. Many many of them, over ice-cream.
Posted by Shannon at 10:20 AM 1 comment:

SNOW! and not much sleep

Wren woke every 2 hours last night and didn't sleep after 5am so here we are sitting in the darkish living room hooting at the snow and listening to the Kiro 7 Pinpoint traffic report. I don't know why I am watching the traffic report - I have no intention of going anywhere - but its a ritual for me when its snowing because Seattle gets in such a panic about snow. Traffic is bad without snow and when we have an inch on the road "it is a real mess out there and its not over yet!" 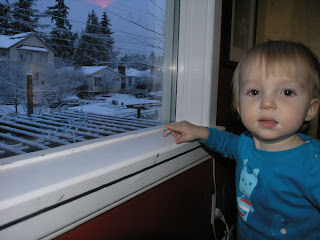 Wren was finally persuaded to eat some yoghurt. You can see it all over his face and down his front. 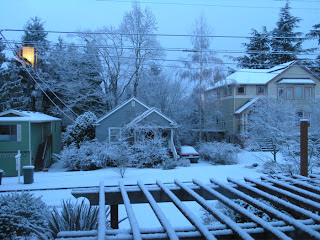 The view from our window. We have about 2" on the ground. 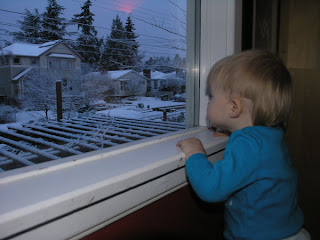 Look at all the snow out there!

Wren didn't have a fever last night but he had trouble with the cough and was wheezing and breathing quickly in the first part of the night. When we got up this morning he had a few fits of coughing and retching until he managed to spit up some of the phlegm in his throat. Since then he has felt better although he will need two naps and I hope I can share one of them.
Posted by Shannon at 12:10 AM 3 comments:

Wren is feeling better although he is still retracting and coughing in a chunky way. He had a good nap and had good energy most of the day. He hates the antibiotic for sinus infection but we suspect it is helping because his nasal secretions have reduced and become clear instead of goopy. He has nose crusties instead of constant gray boogers!

He has gone to sleep easily and nursed well all day although he refused even his favorite foods like grapes, yoghurt, custard and applesauce. He even refused broccoli. When food was offered he shook his head and signed "all gone" and said "bu bye!" then waved. His message is clear!

He was very frustrated at being kept home all day. At one point when Joshua took him to the basement to put the garbage in the garage Wren climbed into the stroller and pointed at the garage door. It was clear he wanted to go for a walk. Later, he went to the back door and tried to get out, crying when I refused. He popped the cat door open and stuck his hands out until Joshua took pity on him and took him, bundled up, into the winter sunshine for a short while.
Posted by Shannon at 1:11 PM No comments:

Wren slept well last night because of the fever. He did not cough as much but wheezed and was breathing fast (50 bpm approx) all the time. Around 5am his fever broke and he rested easier but had more coughing and spitting up milk.

This morning I noticed that his retractions were worse - I can see his ribs at the back and side when he breathes in - BUT he is feeling much better. He is walking around, has more normal color (no purple rings under his eyes) and playing with toys and talking.

I suspect the fever will return later but am glad to see he is feeling better now. I am watching that wheeze and retractions and may mention it to the doctor later.
Posted by Shannon at 1:22 AM 6 comments:

I took Wren back to the ped today because he was running a fever and was tired, flushed and weak. He had also been vomiting a bit during coughing fits. The doctor noticed he was doing a bit of worker breathing and grunting. Even though his sats were good (96%) she sent us to Children's for an x-ray.

The chest x-ray showed bi-lateral inflammation in his lungs which the radiographer described as viral in appearance. He said it was diffuse rather than deep and did not look like RSV inflammation although it could be.

Wren is on antibiotics in case he has a sinus infection (this cold & cough has been going on almost 3 weeks) and we are watching him carefully for any signs of increased stress on breathing. If the fever persists through Monday we will take him in on Tuesday morning. Otherwise there is nothing much we can do.

On the advice of our naturopath he is having bryonia alba, some thymactiv, castor oil rub on his chest with obelia tincture and can have honey loquat cough tea. We shall get some tomorrow.

He has remained sick and weak all day although he will still walk around a bit until he remembers he is feeling bad then he flops down in my lap. It is sad and I am worried about him.

We discussed Wren's weight and we have been referred to the nutritionist at Children's Cardiac clinic to do a calorie count and advise us on diet.
Posted by Shannon at 1:37 PM 1 comment: