Wren had his 9 month well-baby checkup this week. He did not need any shots but did have a toe prick to check his iron. The good news is that he is no longer borderline anemic. His iron levels went up from 10 to 10.6 last time to 11.6 this week. I think it is all the lamb and vegetables he has been eating.

Overall, Wren continues to grow well. He is:

His head has continued to increase slowly relative to his other measurements. It started off at 25th percentile so the pediatrician said we will watch that and if it continues to increase she may order a CAT scan to rule out any reason other than a big head. Frost's head behaved in the same way during his first year and he just has a big head so I am hopeful it will be all okay.

Other than that, Wren was meeting all the milestones she asked about. He babbles vowels and consonants, feeds himself with pincer grasp, crawls confidently and eats a variety of foods.

She was surprised to see that he can stand!

He only renegade behavior was not sleeping through the night and of course I was told that he doesn't need to eat at night for nutritional purposes. Hrmmm. She should tr telling him that at 2am.

Wren will get a flu shot this season but we don't know whether he will qualify for the Synagis shots. I need to call our insurance and check up on that.
Posted by Shannon at 10:36 PM 2 comments: 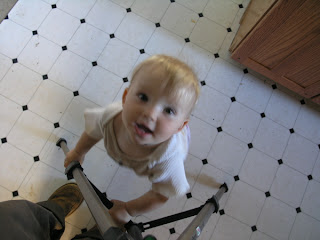 We have had a very happy Sunday. It started early, as usual, with a 5.05am screamer. I waited 10 minutes but he didn't return to sleep so I went to nurse him and he fell asleep for 20 minutes afterwards which was very civilized.

As soon as there was light (7am) we went for a walk around the neighborhood. My goal was to explore a new toyshop, , I had read about When we reached Happy Planet I didn't even look at it because, joy or joy, rapture oh rapture, I discovered the Queen Mary Teahouse right next door. It is a British Styled Teahouse serving English food, splendid teas including many teas made from rooibos, high tea and most glorious pastries. That there could be a new toyshop AND an English Teashop within walking distance of my house completely unknown to me fills me with a sense of wonder.

I am going to go and drink tea real soon - at least if they serve tea and scones alone rather than being part of a banquet as the menu indicates.

He Stands
In other news WREN STANDS UP. He doesn't do it all the time but he has balanced without holding on for about 10 seconds and for shorter periods fairly often. I think it will be a matter of time before he discovers a new mode of locomotion. Although I don't have a photo of him standing without holding on, I have this new one of Wren solving the problem of how to crawl with a toy. This time its in his mouth.

He speaks, sorta
Wren has said his first word. Its more a sound, really. When he sees the fish mobile (which I call the Fishies) he says "sh-ss" it sounds like part of fishes. He has done it many times and a women who we were interviewing for babysitting also heard and commented on it. 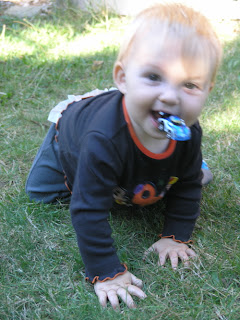 Pancake Puffs
While watching TV Frost noticed a commercial for "Pancake Puffs". He is always calling me to "see this" or that wonderful contraption available only through TV. If it were up to him we would be fitted out with all the weird and wonderful "as seen on TV" gadgets. AS it happens the pancake puff pan is actually a Danish Ebelskiver pan remarketed as an invention for the US market. AND remarkably, I bought on on an estate sale a few weeks ago. So, I whipped up a breakfast of "pancake puffs" for Frost and he used a big hospital syringe to squirt maple syrup into the middle of a few of them. He was extremely gratified as I usually dismiss the ads as nonsense. Each time he ate one he said "So, THIS ad wasn't a lie! So, THIS ad was TRUE!". Uh oh.

Here are pictures of some treasures I bought at the estate sale, including the ebelskriver: 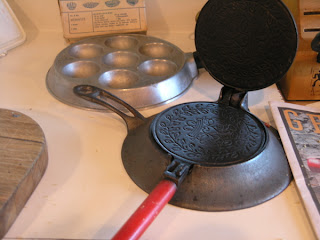 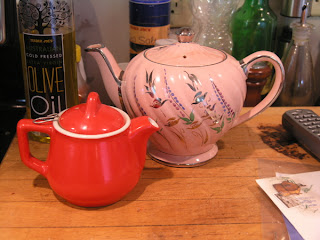 This afternoon we went to an SCA heavy tournament. The SCA members were all dressed in their regalia and fighting wearing helms and armor. Some were performing on horses with wooden lances. Frost was quite interested although a large pile of gravel was equally compelling. I bought two silver hair spirals which I am enjoying wearing. We live in the Barony of Madrone according to SCA lore and we are considering going to some events because it was fun and I like the crafts.
Posted by Shannon at 3:41 AM No comments: