Yesterday Wren saw the pediatrician for his 15 month check-up and shots. He is quite scared of the pediatrician's office and cries and clings to me as soon as the nurse enters.

The appointment was pretty straightforward. Wren's stats are:

Although he has not gained a great deal of weight, Wren has managed to maintain his weight relative to the 35th percentile and his length and head have grown which satisfied our pediatrician that he is eating ok. We are still trying to encourage him to be a bit more enthusiastic about non-sugary food. He would each chocolate and donuts all day if I let him.

Wren is doing fine developmentally although he is speaking a bit less than she expected - I think I said he knows 10-20 words but that includes animal sounds. He is not a big talker in English although he speaks constantly in his own language of inflection and sign.

These are the words I can remember. Joshua can add more later. According to an online reference "The child’s vocabulary is constantly expanding and she will first learn those words that are most relevant in order to control and relate to her environment". These words give you a glimpse into the world Wren seeks to control.

Signs:
Milk
All done
Up
No
Waving

He is doing well physically. He can almost run, can climb the ladder into the fort on his own (oops - must make sure the ladder is never left up), drink from a cup with some sloshing, eat with a spoon with lots of spilling and pick up anything he wants to eat and many things we don't want him to eat (like cat food). He can reach to the countertop with tippy toes and fingers and easily climbs onto chairs and from their to the table. He goes up and down stairs at speed and has started to try and step down small steps and to walk up steep hills and run down them repeatedly. These steep inclines are his latest fascination.
Posted by Shannon at 3:02 PM No comments:

Frost, the president and the J-word

Frost and I have some of our best conversations in the car. This morning, driving to school, he asked:

"How old do you have to be to vote in the election?"

I replied that I thought you had to be eighteen.

"That's not fair!" he said. "Everyone should be able to vote."

"Who would you vote for?" I asked.

"Well," I said (wearing my Clever Parenting hat) "that's probably why you have to be 18 to vote - you need to have a reason why you are voting for a president."

"Uh huh" I said. "That's a good reason for a kid but its better if you know something about the candidates and decide what you like and don't like about them."

"Oh!" Frost sounded pleased. "Actually, I do have some reason thats presidental. HILLARY WANTS WAR! Obama doesn't want war. That is why I would vote for Obama!"

"Why do you think Hillary wants war?"

"I dunno. I heard it somewhere. Maybe Fred told me. Or Alex. Hillary is being the J-word!"

Me: I don't think Hillary Clinton or Obama are being jerks really, they would both be good presidents. Its just a competition about who might be president right now so people say good and bad things about each candidate to try and persuade you they are right.

[long pause as we drive around Greenlake]

Me: Well, no-one should swear really. They should try and use words to describe what they mean but you can't really tell grownups what to do so sometimes they are a bit lazy and just use a swear word instead of explaining their feelings. But nobody should swear so grownups ask kids not to. Also, some people get angry with kids and grownups if they swear and think you are not such a nice person.

Frost: 'Cos when Joshua was talking about Hillary he said she was being the J-word!
Posted by Shannon at 5:08 AM 1 comment:

The noise of global stock markets crashing overnight did not stop Wren having a good night's sleep. His new, and welcome, habit is this:

Yes, 7.30am again. I am very happy and well rested although the morning rush is a bit insane. I think he may wake a bit before 3am but we do not go in and help so he is having to go back to sleep.

He is all better and we are hoping for no more diseasles for a while.

Frost is really enjoying playing Stratego and Wren is wanting to be UP UP UP. He says "up, out and down" to emphasise his needs.
Posted by Shannon at 5:40 AM 1 comment: 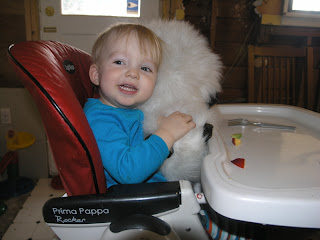 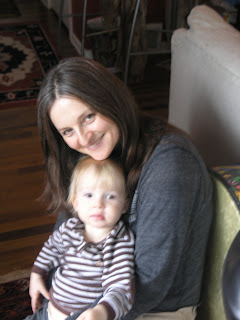 Wren is much better today and has been fever free for 48 hours. He has recently developed a fine red rash on his torso which I was told indicates the breakdown of a virus (a toxin?) so he is probably over whatever it was.

He is also eating very well. Today he fed himself yoghurt for the first time and ate one and a half tubs at lunch. He also ate plenty of fruit, hamburger bun, milkshake and whatever else was offered to him.

Here is a picture taken within the past few weeks which shows how much plumper his cheeks are.

I have also included a picture of Wren and I because I so seldom have nice shots of myself.

The Minivan cont...
This afternoon we went out to the Kia Dealership and test drove a Kia Sedona. We were really pleased with it although Frost and Joshua said it should have only a 4 and half star security rating because he caught his finger in the rear window catch when he tried to open it.

We are going to return on Wednesday and see what we can get for our car as a trade-in.
Posted by Shannon at 12:57 PM 4 comments:

These are the pictures of the new sliding doors recently installed in the back wall of the kitchen living area. We are very pleased with all the light and are learning to avoid tumbling downstairs. There is no deck yet but we are getting a quote and consult on the 26th.

The cats miss their catdoor and have made muddy paw marks on the door from scraping the glass to get let in. 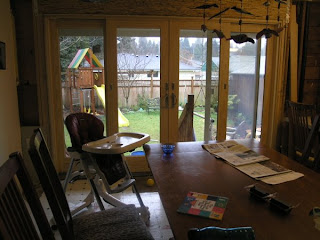 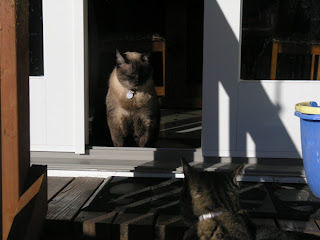