The Games we Play (by Granny) 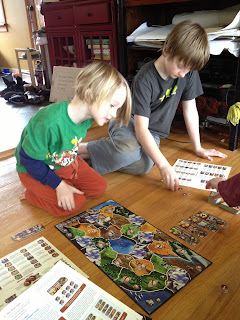 Wren and Frost both love games and don't mean only commuter games. Any games. I realized that since I arrived here from Australia a week ago we have played games morning, noon and late. 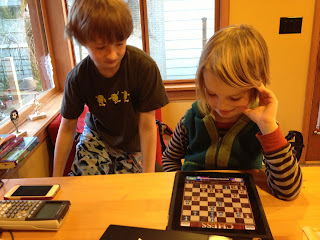 Shannon bought a new board game called Castle Panic which the whole family can play. It is unusual in that it is a cooperative game. Us against the orcs, trolls, goblin kings and giant boulders. Our precious castle is at stake and general panic ensues as the enemy advances. Wren has learnt to give up the cards that he wants to hoard for the survival the team. It took a little persuading.

Later we wanted a little quiet time so Shannon set Wren up with drawing pens and a big piece of paper and he decided to 'make a game'. I think, in doing so, he may have stumbled upon his future career, for he proceeded to design a game with cards; an enemy that inflicted grades of damage to our ‘tents’ and many other details. It bore some resemblance to Castle Panic but not a lot.
I can understand why Wren is so involved in the world of fantasy challenge. His current night time story is Harry Potter and in the car we listen to Greek myths and legends.

Josh plays games with both boys and last Sunday I was introduced to a very complicated board game designed for age 14+ called Qwarriors, complete with expansion packs. Its intricacies were a challenge to me but Wren and Frost were at home.
Shannon says that Josh looks at http://boardgamegeek.com/ for interesting games to play with the kids. 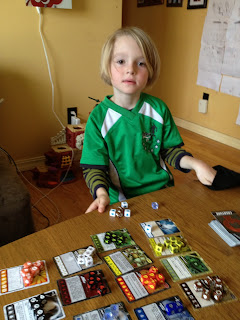 Another game for Wren is to shadow fight in the garden or bush, solo against imaginary enemies. On our recent trip to eastern Washington to search for the Sandhills Cranes, Wren walked with us, his wooden sabre in hand ready to deal with possible invaders. He was most concerned with the ancient 'potholes' that we saw in the scab-lands. He had imagined that we might fall into them.

Shannon and I were taken with Wren’s delight in story telling. To pass the time at dinner in a tiny 'outback' town called Soap Lake, we played the game of 'continue the story', where one person starts the story and the next person continues it.
Shannon, 'Once upon a time there was a little boy called Lump who lived beyond the mountains. He had never travelled so one day he decided....’
Wren was off talking and no matter what twist was made in the tale he was ready with orcs and dragons and mining equipment to enrich the plot. Sometimes he was distraught if we digressed in a different direction. We played this several times on our travels in between looking for elusive cranes and the more elusive burrowing owls.

Back home the kids had a pupil-free day last Friday. So more games were played. First Wren made a shop to which we came to make 'purchases'. Next we played forfeits and he designed a series of forfeits that came randomly with the cast of the dice. …Such as running around the court six times.....

And then Frost had his first match of Ultimate Frisbee. A game I had never watched. It is most similar to soccer. It was a windy cold day - maybe normal for spring in Seattle but freezing in my world. Frost, with help from his team, scored the only goal against the opposition. It is a fast game and a lot of fun. 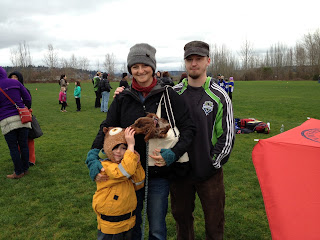 And the last game to end the day was a little tennis on the half-court. More running around the court….No wonder that I sleep well.