Wren turns 1 today. He has already had pancakes for breakfast with a candle sticking in one. He is completely indifferent to the gifts we bought him but looks cute in his new Australian bonds pants. Frost is enjoying the gifts and sticking little magnetic animals into an underwater story book.

Yesterday, I had my first morning of babysitting without having to work a school shift. I went to the gym for an hour and then met with Mia at Third Place to work on the school marketing plan. Okay, I didn't exactly hit the Spa as I had threatened but it was pretty good to be able to speak without interruption for a few hours. I had coffee, a soup and bread and didn't have to share anything.

The new babysitter is wonderful. She comes to our house with her little boy who is almost 4. She bought Wren a birthday present (which reminds me, we should get something little for Kyler who is turning 4 on Sunday). Wren doesn't cry when I leave him with her and she has put him to bed once. These are both huge steps forward. Next week she is coming in three mornings because I have to work two shifts at school and have a dental appointment. When Frost was little I once took him to the dentist with me and had him sit on my tummy and go with the nurse when he was fussy. This is much easier.

Meanwhile, Wren has had a stuffy nose for two nights. He doesn't seem to have a cold during the day so perhaps its a post-nasal drip thing. It makes him wake up a lot and he can't nurse first thing in the morning. I hope it passes soon.
Posted by Shannon at 1:09 AM No comments:

Vegemite - is there a heart kids diet?

Thanks to a visit to the Australian Meat Pie Company in Burien and a Christmas parcel from Mum in Adelaide, we are now stocked up on Vegemite for the next year.

As almost all Australians know, vegemite is essential for a healthy and well adjusted kid. As that website I linked to explains (for an American audience):

Australian children are brought up on Vegemite from the time they're babies. It is said that Australians are known to travel all over the world with at least one small jar of Vegemite in their luggage, for fear that they will not be able to find it.


Thing is, as Wren approaches his 1st birthday and his next cardiology and 'well-child' visits I am wondering whether there is a heart healthy diet he should be on. Should I be keeping salt really low? saturated fats? This kid seems to like the saltier end of the healthy food spectrum so although we don't give him soy sauce he loves vegemite toast and sausage rolls.

When we saw Wyndi and Izzy at Wren's party yesterday (thanks for coming, it was great to see you again) Wyndi said she had not been told to restrict Izzy's diet. Izzy has some of the same heart issues Wren has so I am hopeful we will be allowed to corrupt him any way we wish. Still, I feel the onus to set him out on a healthy path.

Ideas anyone?
Posted by Shannon at 2:06 AM No comments: 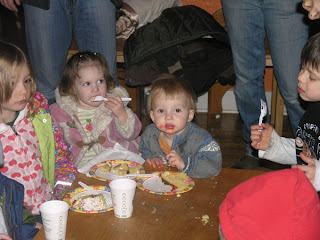 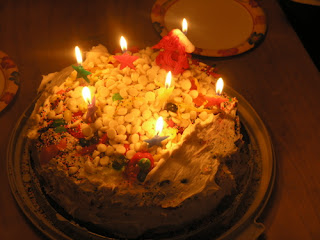 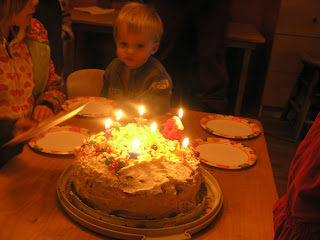 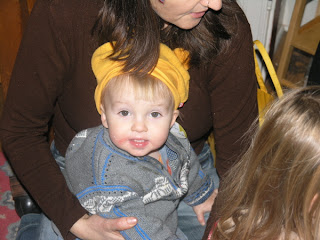 Here are some pictures from Wren's birthday party today. It was held at Tara's school (the Fremont Community School) where the giant bunny and rope climbs were especially popular. Wren liked the cake and became agitated when he was denied any more chocolate chips. He also became agitated when we stopped blowing bubbles. Everyone was very kind and helped clean up as well as giving Wren splendid age appropriate presents. He has been playing with them at home and we have had a very easy afternoon while Frost was at at playdate with Rosie.
Posted by Shannon at 1:50 PM No comments:

A glimpse into the festive season at our house. It is full of ups and downs and dead mice:

Saturday
5.30pm Shannon, Josh and Frost depart the house. Frost is dropped at Alexanders to go with his family to a 'creative' Christmas party. Wren is left (crying) with Heather, the new babysitter. She has instructions on how to put him to sleep but no-one expects this to go well.

6.15pm Shannon and Josh arrive at the MSNBC Christmas party in Belltown. We know nobody but there is an open bar and a Mexican buffet. Through judicious couching of the bartender Shannon manages to procure Joshua a mudslide and herself a Margarita and from then on things go swimmingly.

9pm Shannon and Josh leave party in good spirits although they have not won the X-Box and i-Pod lucky door prizes. There is no reply on Freds cellphone so we assume Frost is having fun.

9.30pm Heather reports Wren went to sleep without a peep (Hallelujah!) but she was alarmed by a racoon in the kitchen and barricaded the cat door with a chair to keep herself and the baby safe. Okay, that last bit was my embellishment. Speak with Tara on her cell. A performance is about to begin. Fun is being had. Frost will be brought home after the short performance.

9.45pm Josh heads off to Scotts for a night of poker.

10.45pm No sign of Frost. Shannon calls Tara. They got distracted eating hotdogs. They will bring him home now.

11.pm Frost returns home. House is in darkness. Frost had a fabulous time and talks rapidly about juggling, bouncy castles that fell over, riding a scooter, getting to buy drinks that are free, drinking TWO sodas, running around, riding a wobbly white chair.

11.15pm Wren cries mightily probably because he missed nursing at bedtime. Nurse Wren back to sleep.

Sunday
2am Josh returns from poker.

3am Wren wakes. Nurse Wren back to sleep.

5.08am Wren wakes for the day. Shannon nurses Wren then lies in bed in darkness while Wren plays with the musical instrument box - clanging on cymbals, bells, drum and xylophone.

5.38am Wren tires of playing alone and hoots at the closed door. Shannon gets up and makes coffee.

6.10am Frost gets up. He has woken because in the flurry of lateness last night he put his pull-up diaper on OVER his underpants, which are now wet. He decides to stay up even though I won't let him play X-Box games in the early morning. He lies on the floor listening to music while Wren climbs all over him and throws the X-box games on the floor.

7.am Frost is allowed to watch Spongebob. I slice strawberries. I give Wren a strawberry. He does not like it and spits it out. Frost comes in. He eats some strawberries. Someone stands on a strawberry discarded by Wren. There is a smear of red on the white linoleum. I clean up. I give Wren some raspberries which Frost picks through for mould. They are $5.99 a punnet and they have mould. Yippee.

8.am Frost finishes that Spongebob episode. Wren is playing quietly in the kitchen. He is crawling after the cat, and hooting. I am relieved he is quiet and happy. I finish slicing strawberries.

8.15am Wren crawls towards me with a toy. Its swinging in his hand. I focus. F*CK. He is holding a really truly gray furry mouse. It appears dead. I scoop him up. It is indeed a dead mouse. He is upset that I have taken his mouse. He cries. I am appalled. I wash his hands and face. I have no idea how long or in what way he played with his mouse but it explains why the Kitties were hanging about with him. I imagine him sucking on the mouse. Everything goes in his mouth, right? I throw the dead mouse outside. I wake Josh to tell him about it and he asks if the mouse was "fresh dead". When I say that its likely he says "its okay then, he's just a hunter".

8.30am. I dress Wren and put him to bed for nap. Frost opens the present box from Granny in Australia. He is elated to find Cherry Ripe candy bars. He wants to eat them all now. I tell him to label each bar for someone in the family and then we can each eat our candy bar when we want to. He labels his FROST and decides he wants to eat it right away. He eats it right away. Josh staggers out to lie on the couch. This is his attempt to be supportive.

8.35am. Frost reports that Daddy is asleep on the couch. Frost is throwing things around the kitchen. When I tell him not to throw things on the floor he says he's not. He is just throwing corks with a spoon catapault he has made.

9am. Josh pokes his head out from under teh green blanket and asks what time the birthday party is and what time it will be over. When I accuse him of lack of enthusiasm he says he is just trying to "plan his day". On closer interrogation this is code for "what time I can watch Football."

9.am It begins snowing. I eat fried chanterelles on toast and write this blog. In two hours it will be Wren's first birthday party and we are going to have cake, Australian meat party-pies and sausage rolls, spiced cider and some coffee. I hope it works out. I feel I have had most of a day already.
Posted by Shannon at 12:15 AM No comments: