Does this say DEDAN?  Dugan (aka Doogan)?  DEGAN?

Wren Wonders how Black People Were Made 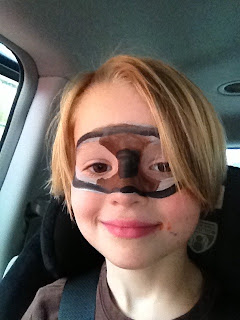 The babysitter had a word with me last night.  She was concerned that she had one of the Big Conversations with Wren at bedtime and she wanted to fill me in.  Apparently Wren had asked how Black People were made.

Sasha explained that she had to be careful to ask a few questions to understand what he was asking.  It seems, Wren is under the impression that all people are innately pale and that in some cases special techniques, magic, luck, chance etc occurs to make a person turn black.

"How do people turn their skin black?" he wondered at bedtime.

She explained that people were just born black, or yellow or pale or tan and came out of their mother's tummy that way.

"How does the mother's tummy DO THAT?" asked Wren, now altering his world view to allow that babies gestate in a kind of dye-bath environment which stains them a particular color.

Sasha tried to explain that the color of the baby was from the parents.  That parents before that baby had a different color skin.

For Wren that only pushed the issue BACK a generation.
"But how did that MOTHER get dark skin?"

Apparently, Wren has a notion of an incredibly pale progenitor.  I shall have to explain at some point that it was just as likely the other way around and that his paleness is the question.
Posted by Shannon at 4:18 PM No comments: 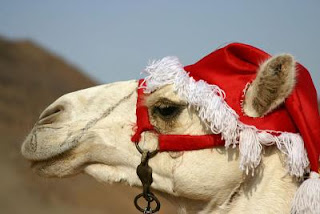 We were reading the newspaper at breakfast yesterday and Wren asked about the article showing camels.  They were walking down 51st St in NYC where they are for some Christmas theatre.

"Why are camels in a show about Christmas?" one of them asked.

"Because camels are COOL!" said Wren.

"Because they were on Noah's ark?" pondered Frost.

Frost left the room abruptly and I ordered him NOT to Google it.

"Okay, because they are in the nativity scene?" ventured Frost.

Sensing we had missed a good story I explained about the star and the wise men and the gifts and the star stopping above the stable and that the wise men were riding camels.

Wren had never heard this before.  When I complained to Josh that we had left out some fundamentals of Judeo-Christian mythology he got all defensive and asked whether the kids knew the great stories of Islam or Hinduism.  I said they knew quite a few Hindu stories and many Buddhist ones but surely he owned that Christian narratives are closer to our culture than the others.

He refused to admit this.

Regardless of their Hindu-buddhist-greco-roman mythological framework, the boys are keen on Christmas.  Today they gave me Christmas lists.

Frost would like things relating to video games (t-shirts, equipment) and Wren wrote his own list. Sadly, I cannot read many of the items on his list.  I attach it below. 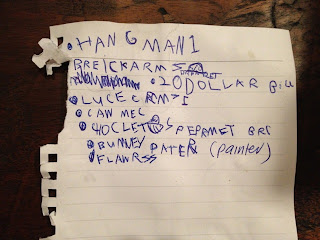 I think it says:


We will see what we can do about the lychee army.
Posted by Shannon at 4:09 PM No comments:

Wren told me to post this on the blog.  He said "look what I can do!"  He is very flexible.  He can drape himself in a backbend over the couch.  Almost do the splits, first thing in the morning, cold, in his pjs and has double jointed fingers.  He loves to show how he can pop his thumb joint out like I can (but Frost and Josh cannot).  He is working hard to make a crook in the tip of his index finger (as I can!) and likes to bend his tongue in funny shapes.

Anyway, here is Wren's performance of Bendy Wren.  He would still be performing if I hadn't tired.