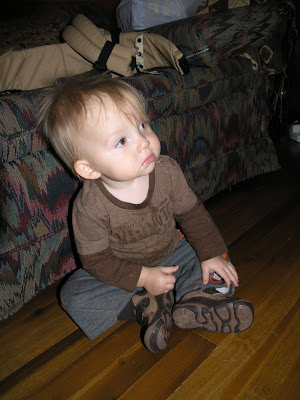 Wren had a big day today. It was my school workday so he stayed at home with the babysitter Lisa while the wild winds blew and flurries of hail and bouts of torrential rain scoured Seattle. He did okay. He cried a bit, had very short naps but wasn't as wary as before. I think his molars are starting to hurt because although the right has all 4 cusps through, the left are just emerging.

First Steps
Since yesterday, Wren has been standing up all the time. He has learned to stand up from sitting down without holding on and pulling himself up. However, once up, he didn't know what to do so he would just stand there playing with a toy or looking at something he is trying to reach. Today, I showed him that he could take a step once he was standing. He had a few tries and can now take one and a half steps most attempts. He mainly does it because he thinks its funny that I am so excited. He grins at my encouragement.

Shoe Shopping for Frost
This afternoon we went shoe shopping to get Frost a pair of winter shoes. All he had until now was his pair of orange crocs with a pumpkin and black cat stuck on them. He ended up with a pair of Stride Rite sneakers and some socks in which he ran up and down the shop "sliding, like it was really slippery so I was like woooooosh". A customer who came in while we were in the shop said "he is very high energy, isn't he?" He is.

Wren Has Big Feet
While there I was seduced into buying Wren a pair of shoes, his first. He was barefoot at the time despite the cold, storms and rain so it was fitting that he was shod. According to the Shoe Man, Wren has big feet.

Fries and root beer
Because I was tired and in the car already, we went to fetch Josh from work. No, actually it was because we wanted to see Josh and spare him a bus ride home in the stormy traffic. On the way home we bought Frost a Dicks burger and fries from The Big Dicks at Queen Anne. Wren was sad about being confined in the car so Josh gave him some foam from the top of the root beer float. After that he was very quiet and able to be entertained by a couple of fries until he got home for his healthy squash and quinoa dinner.

"I have always wondered why babies scream so much louder than humans. Maybe its because their pressure of excitement is higher?" Alexander (Age 7)

Wren was in fine form this afternoon when we went to fetch Frost and Alexander from school. Alexander ran up to the car saying "hello Wren" and Frost arrived yelling and hooting and swinging his backpack. From that moment on Wren decided to scream his own version of shouting. He was not unprovoked because Frost has the mistaken impression that shrieking back will be entertaining. It is not.

Somewhere on the way home I decided we needed an easy and crowd pleasing dinner so I stopped at Safeway for hot dogs, buns and instant cornbread mix. How the mighty have fallen. In 1996 I was cooking and grinding my own soybeans to make tofu and feeding a green tree frog from my hot compost heap. Now I am reading The Erotic Secrets of a French Maid (I kid you not, most of my excitement happens between the leaves, not sheets) which is a library book and am feeding my son hot dogs. These are not even Whole Foods nitrite free happy turkey hot dogs. They come from the aisle with that liquid cheese and meat that you can peel.

Anyway, Wren is well and enjoyed his baby group except for the part where I went to the discussion group without him for ten minutes. He also enjoyed his afternoon except for the part where I left him with a babysitter, awake, for an hour and a half. Yes, there is a theme here. Wren is very attached to me and is confident and exploratory and happy if I am within sight. If not, he cries and looks for me. It is tiring. At times he clings to my legs and follows along crawling and crying until I pick him up. This makes cooking difficult. I know this is a phase but I would like him to be a little more relaxed around people he knows so "I can go out without anxiety and return to a baby who is happy not crying and fixing me with gulping guilty stares.

What else? Oh, my blood test results came back showing I am once again calcium deficient. It seems whenever I go off calcium supplements it takes only a couple of months for calcium deficiency to rear again. I am taking that chalky supplement at night.

Yesterday, old family friends Brenda and James visited. It was very good to see them. It is surprising how important friends and connections from "home" are for the psyche. I feel very energized and appreciated for who I am after their visit and hope they enjoyed meeting the children. Yesterday, was a big digital day so Frost was not ultra-social. He had just noticed Joshua had bought and installed an X-Box 360 and the High-def cable had been turned on. As a result we could interest James in the intensity of our TV signal on the new screen as well as keep Frost mesmerized with HD eye-candy that came free with the X-box. He is now playing breeding pinata and feeding them fruit:

Uh oh. I hope he doesn't do the math on his birth certificate.
Posted by Shannon at 10:06 AM 1 comment:

This afternoon Wren and I got together with some babies and parents from our Listening-mothers Infant group. It was lovely to see the babies so big and social. At the group I was asked a question which has come up a lot of late. "So, how is his heart doing?" I have been asked on 2 phone calls and by 4 other people in the past 24 hours.

This question is difficult to answer. Wren's heart is not entirely normal. He still has aortic stenosis (mild), a bicuspid aortic valve, a mild coarctation of the aortic arch and the most serious concern - a left ventricular outflow tract obstruction (LVOT obstruction). His left ventricle has been mildly thickened since before he was born and remains pretty constant at a slight thickening.

The great news is that he seems to cope very well with these obstructions. If his stamina is reduced we have not seen it yet and we are unaware of any imminent problems like high blood pressure, regurgitation, problems with the valve or strain on his left ventricle.

So far, he seems to be in the "chronic" state with his CHD - meaning he is pretty stable and will need monitoring every 6 months or so unless something changes. This is pretty hard to live with when you think about it but since Wren looks so well, is thriving developmentally and is clearly happy and 'healthy' we do not worry much day to day.

IF he did need surgery it would probably be open heart surgery to address the LVOT which can damage the aortic valve if turbulence is severe. Our cardiologist said they would be cautious about suggesting that surgery because it has a significant risk of causing scar tissue at the site of the repair which leads to further complications. We hope Wren does not need the repair.

Thank you for your concern, those who asked!

New games
Wren turned 10 months by stealth yesterday. He continues to surprise me with new games and cleverness. Today he continued his "I feed you, you feed me" routine and tried to feed me water from a cup in the bath. I had just shown him how to hold a little plastic cup and drink from it and he had taken a series of gulps while holding it himself. I showed him the sign "drink" and opened my mouth. He brought the (now empty) cup to me and pushed it to my mouth with a huge smile.

Bathing together
This is the second night we have bathed together and its fun. He likes to stand in the bath (probably because it is deep) and splashing makes him laugh. He is fascinated by the stream of water falling from a bottle and makes serious attempts to hold it. He also laughs at the gulping noise of air exiting an empty bottle pushed underwater. He squeals and laughs.

The Later Bedtime Attempt
Tonight, Wren went to bed at 8pm. This is part of the plan to get him to sleep past 5.30am but also in anticipation of daylight saving causing his current sleep habits to go awry. I really cannot go back to the days of 4.30am wakenings. It is just not going to happen. We all ate dinner together in a strange parody of a Top Chef challenge - my intention for us all to eat the same thing failed and we all ate different meals with similar ingredients:

The "how is his heart

Posted by Shannon at 1:23 PM No comments: