Wren is still not sleeping (well). He believes that he should remain attached to my breast at all times like a tick. If attached he sleeps. When removed he wakes.

Meanwhile, Dad has arrived from South Africa via China, Taiwan and Thailand for a one-week visit. He tells us that the sun is out so brightly in SE Asia that he was burned through a t-shirt while swimming. I feel envious. I want to wander the beach and suffer heat.

It is wonderful to have Dad with us - he brings with him all manner of pleasures: the smell of mint toothpaste and shaving cream in the bathroom in the morning, having a tall person in the doorway (he is 6 ft 4"), having someone to share the carrying of Wren during the day and a fellow cook in the kitchen.

Last night Dad brought out recipes from his cooking class in Thailand and we made Thai fish cakes from scratch. Unfortunately, the lime tree Ingrid was trying to smuggle home to South Africa was captured in transit by the Chinese customs sniffing dogs but we managed to find some leaves for sale at Whole Foods (along with a lovely lunch from the deli bar). Frost was thrilled to be allowed to leave school early yesterday after the field trip to the arboretum where we went for a 2 hour walk with the school. Dad was impressed by the answers the kids gave to the docents questions. Zephyr was particularly observant in his responses - including explaining why we should not feed the ducks ("Then they will become lazy and not look for their normal food and it will make them sick" vs Frosts' "Its like they are eating desert all day")

Today we are going to the Burke Museum and to the thrift store. Dad has an interest in the geology collections and some cheap clothes.

Wren and Josh are a bit sick with a head cold. Frost is off to swimming at school.

Josh told me an interesting anecdote about sugar. Apparently, we now eat as much sugar in a week as a person living 1000 years ago ate in one year. He has been unable to provide me a reference so it may be skewed but the point is is that we eat WAY more sugar than we used to, or need.

I also read that high-fructose-corn-syryp (HFCS) is a vile stuff and that kids 6+ should have no more than 40-50g of added sugar per day. Really, 40 should be the upper limit for kids Frost's age. So, as an experiment I have been counting and limiting Frost to that amount. Here is the result for Day 1:

Denied:
Drinking Josh's soda at 45g per can
More altoids at 1g each
More ovaltine at 10g per full glass
Juice

He did eat all the other stuff (apples, strawberries, pita, hummus, some vegies, some chicken, goldfish) but think how much more hungry he could be.... [evil glint in eye]
Posted by Shannon at 3:20 PM 1 comment:

Wren had a pediatrician visit today. They measured his leg to get a baseline. It is 1" larger on the left than the right (measured 4cm above knee). It is proportionally larger on the calf too.

He had a hemocrit check. His haemaglobin had gone up from 29.1 on April 5th to 31.8 today. That is a big improvement. We plan to give him iron rich foods when he is 6 months old. Dr Levitt suggested lamb as a good start along with vitamin C rich foods. She also likes iron fortified cereal. I am not sure whether we need to try another iron supplement - for now we are not giving him any.

On the sleep issues she feels we are doing okay if he sleeps a few "at least" 3 hour stretches at night and gets 12+ hours sleep in a day (with naps). When he reaches 6 months she suggests that we can try letting him cry a bit to get the hang of soothing himself if he hasn't improved on that count.
Posted by Shannon at 9:56 AM No comments:

After that week of sleeping hourly naps all night and rising at ever earlier hours I am pleased to announce that life has taken a turn for the better.

This evening we sipped a Napa Merlot in anticipation of our trip down to the San Francisco coast in July. We will be meeting my mother and Mervyn, Claire (stepsister) and Jeff with their two girls Sasha and Cailey. Cailey was born only a few days after Frost so they will have fun playing together. We have decided to take a road-trip down to California and are enjoying musing over maps and looking at versions of the trip. Google Earth has this neat feature where people can load up their images of locations so we have been able to see pictures of the beach near our planned house as well as the area around the motel in Crescent City.

I have been enjoying a new book - a biography of Sir Richard Francis Burton written by Edward Rice. For those not familiar with Burton - he was a famous British adventurer and early ethnographer. He spoke numerous languages including arabic, greek, roman, hindustani, persian etc and is credited with translating the Karma Sutra and indeed "discovering" it for the West. He was also the first Westerner to make pilgrimage to mecca. I am reading about his first time in India and getting wanderlust (although I think I could do without my own concubine, tiger hunting and studying hindustani 12 hours a day in 120 degree heat.) I was thinking that one could not live this kind of life while being a parent and indeed it seems he was not a parental figure although (I didn't know this) he apparently fathered a number of children with his concubines whose decendents still live in India.)

While musing about travel and life abroad, Josh and I are toying (I stress toying) with the idea of living in Melbourne or New Zealand at some point. This is not an imminent event. It is not a plan. It is an excuse to browse realestate.com.au and look at New Zealand on Google Earth. Its a reason for me to pursue getting my US citizenship which might otherwise languish in the longterm to do pile (if I left the US for over 6 months I might lose my permanent residency here and have to reapply to return.) Natasha says she could hook me up with a lot of hippy families in Melbourne and that we should live in Northcote. Real Estate in Melbourne is NOT cheap.

Josh and I have had all this time to look at Google Earth and sip wine because Frost has been playing with some kids in our neighbourhood. Unfortunately, he feels compelled to shriek and make lame jokes and be naughty to show the big boys how cool he is but they seem to manage to have a good time despite his antics. Today he played with Elias and met Eli from up the street. They played Elias's quota of Wii time, roughhoused on the bed, played with the house, climbed the fence with the ladder, ate smores, toasted marshmallows on the gas flame, spraypainted Warhammer spiders and ran shrieking in all directions. I spoke with Ashley (Eli's mother) and it looks like we will try and have a block party in August this year and I have offered to help out if she plans it.

While Frost was over at Elias's I managed to do some more weeding. Wren sat under a tree in his bumbo but wasn't too content to grab leaves so I left him inside with Josh while I attacked the unintentional shrubbery that is our parking strip. Its 90% grass but there is potential. I also went jogging with Wren in the jogger stroller. The whole event was nearly derailed when I couldn't find the canopy for the jogger stroller and didn't want to take Wren out in the sun (yes, there was SUN). Before I could get completely obsessed with my failure to locate anything in the basement, Josh proposed a hat. The hat fell down over Wren's face but he fell asleep so all the falling went in order and I had a lovely garden-tour like jog. Everyone was out doing yardwork. Everyone.

Finally, lest I forget to mention sleep. Yes, Wren did well last night - a necessary condition for all this spring ebulliance. He slept for 6 hours and then 3 hours. We have a new plan - bedtime routing, nurse to sleep, put him down in his wedge, when he wakes (as long as its 3+ hours) nurse him to sleep again but let him sleep in bed with us. That makes the frequent nursings of the early morning more bearable and he seems to be able to get back to sleep with a few pats on occasion. He is getting 1.2ml of zantac AM and PM. We are seeing the pediatrician to review all this and the leg stuff, tomorrow.

Edited this AM: The kids played with the hose, not the house. We have a bedtime routine not a bedtime routing although both of these have me giggling. Last night Wren slept a bit worse: 9pm bed, 11.30 wake, 12.30wake, 5am wake, 7am up (after an hour of wriggling). That long stretch in the middle will get me through the day.
Posted by Shannon at 12:12 PM No comments: 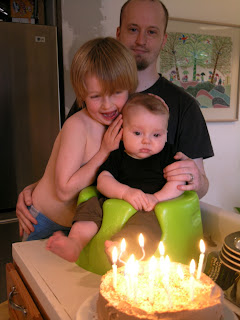 It was Josh's 31st birthday yesterday. He lay around in his pajamas recovering from another night of Wren's non-sleep. John came over and hleped me get the garden sorted out a bit and Josh opened his single present (he insists he is not feeling aquisitive) which was a set of bowls from Shiga's imports.

I made a chocolate cake and we sang a discordent version of Happy Birthday (with John chiming in the "belong in the zoo" version.

It was a mellow day.

Last night Josh went out for drinks with Shawn and Sarah (who shares his birthday minus a few years).

Today we are heading out to Bucca de Beppos for a bit of carb loading. Wren is staying home with Joyce-Anne - the first time we have had a non-family babysitter!
Posted by Shannon at 2:41 AM 1 comment: