Recently, Wren has been very interested in board books about trucks. Its that whole construction obsession that strikes young (male) toddlers from time to time. As with Frost, we have started to haunt construction sites in hopes of seeing a digger at work.

Wren's favorite construction board book is this one, by Caterpillar. He reads the book by turning pages rapidly until he comes to the one of a skid-steer loading gravel. He sticks at that pages for 5 minutes saying and signing "up, up" presumably because it is lifting gravel up in the picture. 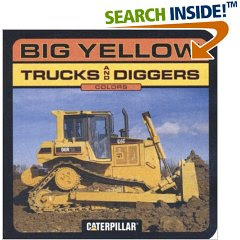 Next, he turns to the following page of a mass excavator with its shovel down. He says "up up" again for a long time. He cries if I turn the page. Again, he obsesses over this particular picture (does he remember the excavator we watched digging?) The only way to "read" this book with him is to stop on these two pages FOR AGES and talk about them.

I end up talking about excavators digging (Wren says "dig") and lifting rocks up ( he echos "up up.") I tell him about the excavator claw and make a claw with my hand (he copies the claw and makes digging with claw motions). Eventually I tire and hide the book which results in tears. 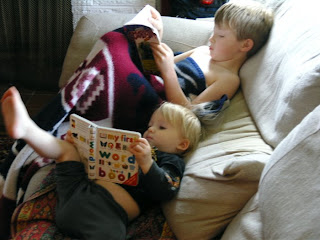 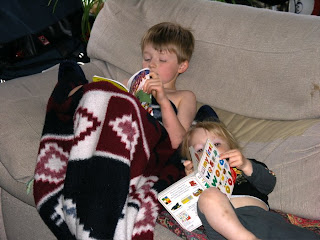 I have been explaining to Frost that he can't watch so much TV because it is bad for him and Wren and that he is a big role model for Wren. I told him that Wren would do new things if he showed him how. This worked very well when Frost was persuaded to read his chapter book on the couch. Wren brought his board book to read next to Frost. They were a very sweet picture and for once did not pose for my photograph.
Posted by Shannon at 12:53 AM 3 comments:

The Melancholy of Grinding Cinnamon

This morning Frost asked for cinnamon sugar toast but when I checked the cinnamon it was all gone.

In the pantry I have a huge glass jar of cinnamon bark which I helped prepare from the cinnamon (kayu manis - sweet wood) tree while living in Banda, Indonesia. I took down the jar and started to grind up a piece of the bark to refill the spice jar. While grinding, the aroma of cinnamon dust gave me a flashback to the patch of grass and blue tarp where we laid out the wood. To the heat and humidity of the island, of Mamamina whom I have neglected to write to (because my bahasa is so foul after a decade of misuse) and the coral sea so rich in fish and hot springs from the volcano.

From that glimpse of melancholy I drifted to missing Africa and the trees with extravagant flowers and seed pods that hang like whole chickens from the low branches. And I miss the sun and the family and rivers that flood with red topsoil into the green-greasy ocean.

My kitchen feels so isolated by comparison with other worlds where people are anchored by need in each others lives.

Wren is now unpacking the dishwasher and poking the clean knives and forks into the heating vents. I hope they are not going down.
Posted by Shannon at 1:35 AM No comments:

Among the blogs I enjoy daily is one by a South African named Tertia. Her blog "So Close" is about her family life (with twins) after a long period of infertility. In today's post she writes about the sudden death of the family puppy. Here she reports on the autopsy findings:

A full examination is done and we have our answer. Thank goodness, thank you with all my heart, the dog didn’t suffer. She had heart failure due to a genetic disorder. She must have died instantly and peacefully. I can’t tell you how much that helps me. The thought of her suffering was killing me. She was such a sweet, loving dog.

The vet says it is fairly common. Their hearts become enlarged and simply give in. My heart feels like it has taken a severe beating this week. I’m exhausted. I feel so terribly sorry for my baby dog. I’m glad she had a good life, albeit a far too short life. And I am so glad she went peacefully.

SAS is a restriction of the aorta, usually by a ring of fibrous tissue, just after it leaves the heart. This restriction results in a distinct murmur (due to backflow and turbulence), heart enlargement, and restricted blood flow. As with CHD, affected dogs can be asymptomatic or severely crippled by this disease. SAS can also lead to sudden death, even in very young dogs. It is thought to be a genetic disease with a polygenic dominant mode of inheritance. Since many goldens have innocent (non-SAS) murmurs as puppies, breeding adults must be cleared by a board-certified veterinary cardiologist.

So, the puppy died of Wren's CHD (without treatment)! I am surprised to hear that there is even a veterinary cardiologist!

Posted by Shannon at 1:24 AM No comments: