I am from the UFO 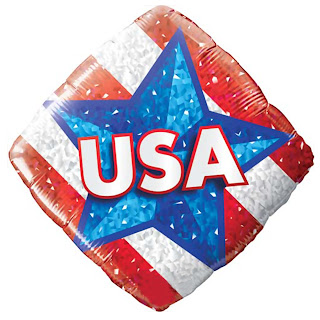 The red, white and blue foil balloons are aloft in Safeway and the girl behind the deli counter is frosting cupcakes to look like hamburgers.  She’s deft with the pastry bag, her hibiscus-tattooed arms hold the bag of red frosting steady as she draws short squiggles of ‘ketchup’ on the chocolate patty.  Wren stands enraptured as she repeats it with yellow ‘mustard’ and then, donning plastic gloves, shakes on the green coconut lettuce as a topping.

“How do you make the lettuce?” he wonders.
“I put green food coloring in the coconut” she explains in a whisper.

"Of course!"  I think.  Friends, be warned, this is my new plan  – pour green frosting on the shaved coconut and make little burger-cupcakes for desert.

Wren turns around and notices the balloons with U.S.A on them.

“What does that say?”  He asks, trying to make sense of the letters.
“It says USA” I explain.  “America – its for the 4th of July holiday.”
“WHAT!” he looks shocked.  “I thought USA was the name for a flying saucer!”
“Nope, that’s a UFO.”
“Oh” he says, confused about his nationality.

This is the same kid who was concerned about the ZA on my car earlier.  I explained I had a ZA sticker on my car because I am a South African, a Zuid Afrikan.    He objected:

“But I am NOT a South African and I am in your car.”
“You ARE a South African a bit,” I tested (not yet fully resigned to having American children.)
“I am NOT!  I am AMERICAN” he insisted, watching my face carefully.  “Did you not KNOW that?”
“I did” I said.
“Were you just TEASING?”

I can’t explain it to him. I am not teasing.  It seems a ridiculous thing to have American children.  When I married an American man it was like trying a flavor of icecream I was a bit sceptical of – say rhubarb chocolate mint.  I didn’t think ahead to spawning rhubarb choc-mint kids.  I keep trying to garnish them with foreigness – making sure to register them as Australian’s born overseas, informing them of their South African genealogy and talking about family overseas.

Sadly, my mixed-nationalism is not working.

A few months ago I learned that Frost had told his teacher that I was born in Australia (or perhaps England?).  She invited me to class to talk about the history of the UK and Ireland.  I had to put her off gently and tell her that I was South African and happy to talk about Africa.

A few weeks ago, Frost was learning the geography of Africa (with which I am hopeless beyond the borders of old Apartheid South Africa) and I noticed that Lesotho and Swaziland were mixed up.  I corrected the map but Frost still got it wrong on the test!

Anyway, for those of you not in the USA I should explain the reason for the theme of nationalism.  We are entering the onramp for the next national holiday – 4th of July or INDEPENDENCE DAY.    Its the day when the television shows us people waving flags, everyone braais (BBQs, barbies) and its supposed to be SUMMER.   I am considering celebrating the Queens Jubilee that Day or calling it UFO Day but regardless,we are having a party.

Frost is planning it with his friend Jack.  He is calling it “Frost’s birthday, July 4th, beginning of summer party!”  He has asked permission to construct a  big creeper out of cardboard and to blow up its head with fireworks.

He has also asked me to buy a big bag of toy soldiers to melt and destroy with fireworks and to get a few "old barbies and ken guys".

I like the creativity of this plan but since Seattle City Ordinances prohibit fireworks, I am tentative in my support.  How can we have a party and then leave the city limits to let off our “Coconuts and Chrysanthenums” or “Bad Monkeys”.   How can we make a barbie inferno at home without drawing attention to ourselves?

For now, I am going along with it, dreaming of hamburger cupcakes and icy margheritas while the rain of Junuary pours outside and the old daffodils keel over and die.  I shall enjoy the practice of the holiday - if not the colonizing imperative - and plan on August in Australia as a time to ply the kids with Lamingtons and wallabies, parrots and pavlova, and set things to rights in my multi-national world view.

Josh recently had his DNA tested with 23andMe and found that his paternal DNA is a long string that is definitively irish.  It has him pegged, right down to his earwax and tendency to freckle.  His maternal DNA is Western European.  I think that explains why he has just bought such a cool car.

In the absence of any information about my DNA (to heal my cultural anomy), I am considering going along with Wren's line and being from "out there" the Unidentified Foreign Object - certainly borne out by recent genealogical research.  We shall have Happy UFO day on July 4th and let Frost wave flags of his own devising as he wages war against plasticity and Minecraft threats.   And I shall be as choc-mint rhubarb as a I can with a pie and cupcakes and some margaritas to smooth it along.
Posted by Shannon at 4:48 AM 1 comment:

Imogen, the flamingo from Australia is the new Reigning Queen of Burlesque aka Miss Exotic World 2012.  The flamingos at Seattle Zoo are a stinky lot but Miss Kelly redeemed them for me with all her lovely pink feathers, puppets and elegant disrobing.

I stayed up late.  It was already light.

I remembered to drink lots of water.

I find Vegas messes with my inner clock.  I ate breakfast at midday yesterday and nothing else all day.  There wasn't the sense that it was now time to eat.  Inside its always dark.  Outside is light a hellavu lot of the time.  Very bright.  Very hot.

I am going to try and do better today that means going out and seeking brunch of an inferior quality to yesterday.

Posted by Shannon at 4:02 AM No comments:

The Tippy Tops of Tall Buildings

Ten am and ninety two degrees in Vegas this morning but I haven't been out of the ambient 74 of the hotel.

I am sitting on the monogrammed carpet of my room leaning back against the king sized bed I had all to myself.  Through the open blinds the pinacles of a faux New York skyline (the New York Hotel) glint in the yellow sky that blushes up to the faintest blue in outer space.   Helicopters circle like small flies over The Strip.

I managed to make a cup of drip coffee in my room - its one of those coffee makers where you stick a coffee 'teabag' into a slot and water drips over it into your cup.  In this case, the only cup offered was one of those white foam ones wrapped in a cup-condom so I stole a cup from yesterday's room service.  Its completely seedy.

So I am now thinking about brunch.

According to my expert advisors, brunch is a big thing in this city.  I am not sure whether my friends are up for a trip to find somewhere but I am quite taken by one that makes donuts to order for you.  Donuts no less.  The alternative is the diner in this hotel which has lots of blue formica and I am not going to vouch for on Urbanspoon.  If I don't get out for my brunch today I am going to have to come back here with Josh and do it.  Even he could be persuaded to get up by 11 for custom donuts, right?

The girlfriends are MIA after last night although I recall Natasha was going to have an 8.30am massage with bamboo sticks or rolling rocks or something else equally ..... er... specialized.


I have been reading in bed and realizing I need a flower in my hair for tonight.  Burlesque girls all wear sequins, figure hugging 40s style dresses no matter how large they are (and some girls are mighty mighty curvy), and hair fascinators.  Burlesque chickies are the fascinator heartland.

Being here, regaining equilibrium without children, has revealed that if I have no responsibilities I like the following:

There are now about eight helicopters out there.

I need a bookshop. 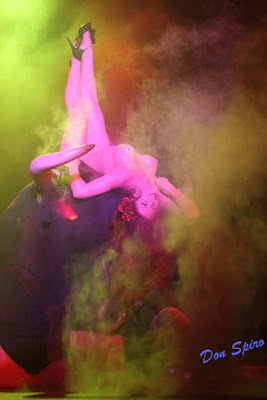 The Tournament of Tease finals are on tonight!   I am already a fan of the Screaming Chicken Theatrical Society - I sat next to one of the performers last night - a girl from Vancouver.  Super excited.  Apparently one of the fans wore (nipple) pasties to the bowling alley so we were warned to dress appropriately.  I have found my skirt from last night but its still smoky.
Posted by Shannon at 3:28 AM No comments: