Nursing Wren to sleep is one of my favorite moments in the day. His head smells sweet and soft and while his belly snuggles up close his hands flail around examining my face, hair, pajamas and the blanket with active curiosity. As he lies on the bed preparing to go to sleep he looks at the ceiling and comments on the stars. Usually, he just says STAR but tonight he said "BIG star" a few times, noticing the large stars spread in our ceiling galaxy.

Tonight, he was chatty at bedtime too. He nursed a bit until I inadvertently knocked a book off the bed with my foot. He stopped and looked at me intently. I said "The book fell of, bump". "Bump" he said and touched his head. "Yes, you bumped your head earlier, but this was the book that fell bump". He nursed again for a moment then rolled onto his back.

"Bump?"
"Yes, the book went bump"
"Book, gone"
"Yes, it fell"
"Dada GONE"
"Dada is eating dinner" (although he was playing with Wren before bedtime, and reading books)

Wren nursed a bit more while I sang "Twinkle Twinkle little star" as a lullaby. Eventually he slowed down and let go and I said, "night night".

This little routine continued until I put him into his bed and he rolled on his side and is quiet.

He is very good at bedtime and smells wonderful - all warm and fragrant and plump.
Posted by Shannon at 12:49 PM No comments:

Wren's cath will be done on Friday 25th July as first case. That means a 7.30am check-in. Frost will be in FCS summer camp that afternoon so its not particularly bad timing as timing goes, and early in the morning will be easier for him to go without "muk muk" for a few hours.

This morning he slept till 5am so I was a happy camper. It is impressive how quickly my internal clock resets to baby waking. This morning I woke at 4am which is the time Wren has been waking for the past week. I had to convince myself it was worth going back to sleep with the threat of him waking any moment. I managed another 45 minutes for a full 6 hours!
Posted by Shannon at 4:35 AM No comments:

And some normal 18 month appointment stuff

Wren weighed 25lbs 3oz (after 6 hours of fasting). This is just under the 50th percentile and seemed to satisfy the cardiology clinic that weight gain was not an issue.

He is 2ft 9 inches tall (and all of him is delicious and sweet). That makes him slight and skinny since he is on the 75th percentile for height.
Posted by Shannon at 1:51 PM No comments:

I spoke with our cardiologist this evening. I asked about the mitral valve. The mitral valve is difficult to repair and articles on Shone's syndrome often mention that the prognosis is inversely related to mitral valve involvement. In other words, it leads to recurrent valve replacements as well as other complications. It was reassuring to hear that Dr L did not see "anything to cause concern at this time".

I also asked about the timing of the surgery as distinct from the cath. He had told us that the cath should occur within 2 months. He said he imagined surgery from 3-6 months and would definitely like it before 6 months and before flu season. That means we are looking at September-November or early December.

I cannot recall exactly what he said about gradient vs rate of flow. I think he said that the peak flow rate was 5 mm/s which calculates out to a gradient of over 100. If that was due to the aortic valve it would mean that Wren has critical aortic stenosis and in fact he described the numbers are "rather scary". To make sense of this, you ADD the gradient pressures to the regular measured blood pressure to get a sense of the pressure in Wren's left ventricle. His BP was high normal, around 100, so his LV pressures are around 200 which is very high and is the reason for the thickening of the heart muscle and the ongoing cycle of increased muscle mass in the sub-aortic area. This is for the scientists among you:

The aortic valve area can be calculated non-invasively using echocardiographic flow velocities. Using the velocity of the blood through the valve, the pressure gradient across can be calculated by the modified Bernoulli's equation:

In other details, Dr L described the type of SAS (sub-aortic stenosis) as "tunnel" type. This is a more difficult type to treat and there are a range of surgical approaches. We will wait to get more information before learning what the surgical conference recommends and getting a second opinion from Stanford.

On a more cheerful note, here are some of the new words Wren has mentioned recently:

With all the hoo-hah about cardiology clinic I failed to post the official WREN IS 18 MONTHS hoorah. So, here it is "Wren is 18 months old!"

I am going to write a lot more about him on Friday when I have some time alone, meanwhile, here are some pictures and a reminder of the main themes:
1) Wren loves DIGGERS. He loves digger toys, big diggers, excavators at construction sites, books on diggers and Bob the Builder - scoop and muck in particular. He loves to read books and just point at them and say "roller", "scoop" "BOB", "Digger", bulldozer" and "rock". At Chuck-E-Cheez today (another story) he spent 20 tokens on the Bob the Builder Scoop ride which was bright yellow, toddler sized and rocked while singing the Bob theme song.

2) Wren talks a lot but is not widely understood. Words to follow.

3) Wren is terrified of squirrels (nut or num nums) and Stellars Jays which cackle aggressively at our cats in the yard.

4) Wren enjoys making bread. He says "bread" and "dough" and rushes to the kitchen to get ready when I mention the plan to make dough. His favorite part is covering the butcher block with flour and spreading it around and then hitting and poking the dough down for a final rise.

5) Walking. Wren loves running up the street and going on walks. He also enjoys stroller riding but of late has preferred to get down a lot and walk, smelling flowers, pulling off Lavender, examining bees up close and commenting on things in yards and the street. He particularly enjoys running up and down driveways saying "up" and "down" as he descends.

Here is Wren making a collection of diggers on his kitchen stool. This was very early in the morning on one of his just 5am wakings. We were making bread. 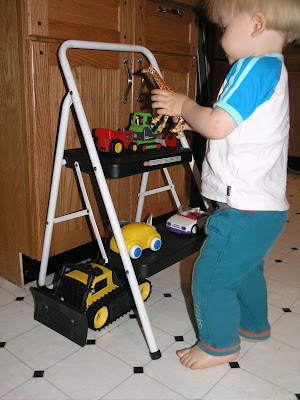 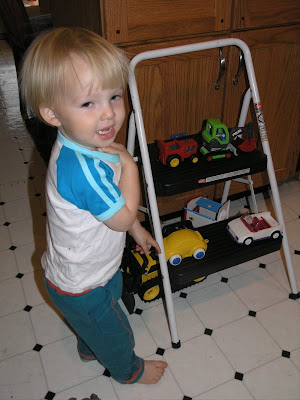 These pictures are of a Sunday Breakfast at Whole foods. The store opens at 7am and we managed to make it there by 6.58am. It helps to be out of the house so Frost and Joshua can sleep to normal hours (7.30am and 10am respectively). This is after eating the scrambled egg and breakfast sausages and some samples of danish. 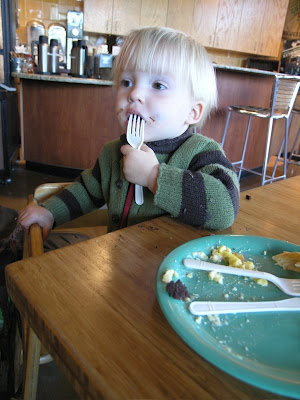 Joshua and Wren enjoy the hammock on the new deck which is now complete. Notice that Wren has a Duplo digger in his hand. 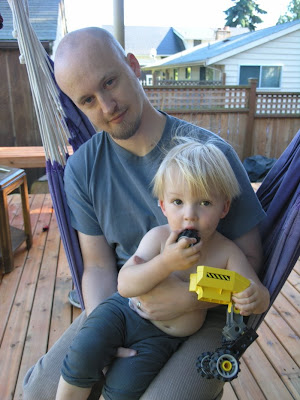 This evening, Wren discovered he likes limes and walked around sucking on the lime I used for the salad. Frost was very impressed that Wren could suck a lime and suggested I give him a chilli next. 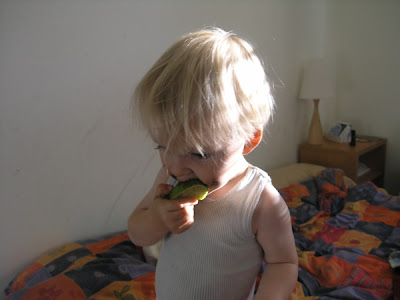 Posted by Shannon at 2:11 PM No comments:

Our consultation with Dr Lewin was relatively brief for the bad news. Apparently, the level of turbulence through the aortic valve has increased significantly and we are now on the surgical path.

Since the velocity was so high it was not possible to distinguish the obstruction. Dr Lewin believes it is a sub-aortic muscular bulge which is producing a diffuse narrowing in the sub-aortic area (SAS or Sub-aortic stenosis). This is not a membranous ridge as I first thought.

The plan is to do a cath within the next two months. The cath should show where the stenosis is critical - SAS, valve or above the valve. If it is the valve (he thinks this unlikely) they would try and balloon it immediately. More likely they would refer the findings to Children's Hospital cardiology conference and see what surgical approach they recommend. The options discussed were "cutting away" the ridge or removing that section of the septum and replacing it with a patch. The removal of the ridge is preferred but is not always possible due to access down the ascending aorta and it is a complicated diagnosis due to rarity and the high rate of recurrence after surgery (he did not mention that this time but I know about it due to other kids with SAS).

Here is an article about it.

I am feeling flat and anxious. I hate to be in this place and worry about Wren now facing open heart surgery when he looks so well and active.

We discussed the best place for surgery and Dr Lewin basically said we had to do the research. I said we would consider Stanford and he said that because we have the luxury of time, after the surgical recommendations come through from Seattle Children's Conference we could then send the findings over to Stanford for a second opinion and to see what course they would suggest.

I do not want Wren to undergo surgery at all if its not necessary but if it is I hope we can get through this before RSV and flu season. It sounds as if the timing is definitely before the end of the year.
Posted by Shannon at 9:25 AM 6 comments:

Wren had his echo at 8am. Dr Lewin wanted to try without sedation so we used Bob the Builder to hold Wren's attention and he managed to lie still (enough) and play quiet(ly enough) to get through 45 minutes without any sedation. Our echo was done by Erin.

We are very pleased.

Because I was lying next to him distracting him and keeping him from grabbing the imaging wand and goop, I didn't have time to analyze the image as I usually do. I did notice lots of turbulence (still) and high peaks on the little pulses which measure pressure or gradient.

We are home for 2 and a half hours to sleep and then return for the 1pm appointment with Dr Lewin to discuss the findings.
Posted by Shannon at 2:57 AM 3 comments:

Wren has his first Sedated Echo at Children's this morning. I was worried about him not being able to eat for 6 hours or nurse for 4 hours before his appointment so I woke him at 4.10am to nurse one last time. Wren decided that was a good time to wake up so after he nursed he played and hoo-hah'ed in his crib for 45 minutes with the occasional thud (removing a book from the shelf) and cry "mummeeee" to remind me he was awake.

He has done well so far and we will leave for Children's shortly.

Our last appointment with Dr Lewin is after lunch at 1pm so we may be back later than we expected. I thought all the appointments were concurrent but there is this break in between.

Frost had his first sleepover at a friend's last night. I have not heard from him or Tara overnight so I gather they survived! I am curious to hear how it went.

This week Frost has decided to "grow up and sleep in his own room" too (his words).

Wish us luck. I am looking forward to getting things underway because Wren keeps grabbing me and dragging towards the chair where he nurses crying "mama".
Posted by Shannon at 12:25 AM No comments: