I have noticed this but I didn't really notice. Now I am worried. Wren is obviously vigorous and happy but he does pant and get out of breath when he has been busy moving about a lot as he is these-days. I think this is our first clinical sign of Wren's heart condition.

I called the cardiac clinic nurse's line just to check that its okay to wait till our next December appointment and Ashley is going to call me back. Really, I think he is okay but as she said "cardiac kids have to self-limit". By this she meant that when they get out of breath they may have to stop and take a break and exercise within the limits of their condition.

I feel a bit sad. We know that Wren is not cured but its been easy to forget the perils of his anatomy when he has behaved so normally in most every way. I don't like to think of him puffing from the grand exertion of crawling across the room.

Follow-Up
Dr Lewin said he thinks we are seeing this because Wren is getting more active. He feels it would be okay to wait until December unless we see him getting more fatigued or panting more or feel anxious. Then he would be happy to see Wren. I feel better now and reckon it is just because of his left-ventricle having to work harder than normal. I know that's not good but its not something new.
Posted by Shannon at 6:26 AM 3 comments:

We had a lovely day today. Frost went to Camp Long on a school trip and I spent an hour at an estate sale around the corner. In the late afternoon we lay out in the yard where Wren explored and tried to catch the kitty.

Posted by Shannon at 1:55 PM No comments:

Wren went to sleep at 7pm last night. He was out like a light. He woke briefly at 1.30am and woke for a nursing at 2am, roused a bit around 4am but just cried out once and then WOKE FOR THE DAY AT 5.45am!!!!

Of course, I was awake at 5am wondering what he was doing but still... it was a fabulous night's sleep for both of us. I hope that tomorrow builds on this foundation.

The greatest thing is he is back to his old self in the morning - crawling around, exploring, seeking floor nuggets and watching kitty in the back garden through the gate. He is smiley and happy. We both are!

Over the past few days Wren has learned a trick. If he has something in his mouth and I put my finger on his lips (as if about to scoop it out) and say "spit it out", he does. It saves us both a lot of indignity and biting.

Wren has been eating new food recently. He now has chicken dinner: blended carrot, squash, chicken and kale, teething biscuits with barley flour, gerber finger foods (ick) with some corn flour, white navy beans and lots and lots of raspberries. He even had a fry when we were in the U-district yesterday but wisely spat it out.

I have also found that Frost eats better when I don't feed him. Uh huh. I didn't give him lunch yesterday (long story without many excuses) and then we went out at 3pm. He asked for FOOD. I gave him a teriyaki chicken burger which he ate all up (with fries). Normally, he has to be coaxed and reminded to eat. While we waited for the burger he said:

Frost: I love food. I have a sore tummy and I feel hungry and then I get food and I eat it and it is so good and I feel sooo good. When is my food coming?

Okay, okay. I do not starve him on purpose. He had a carrot. He had access to a lot of food at home but didn't want it because he was playing lego at lunch. I just didn't follow up, okay? But it is refreshing to have him appreciate food instead of moaning about whatever is on offer.
Posted by Shannon at 11:29 PM 1 comment:

by Jack Pelutsky from Monday's Troll (a book of poems)

It wasn't so bad.

Brook may have found me a babysitter for Friday's during work-shift which is very exciting.
Posted by Shannon at 7:44 AM No comments:

Last night we put Wren to bed at 6.45pm as part of an attempt to get him to sleep later. I have read and been told this may take 2 weeks to take effect and that he may wake at the usual time Still, I was not a Shiny Happy Mummy this morning at 4.30am when Wren decided it was daytime. I decided it was time to show him it was not daytime and left him to try and go back to sleep [aka cry and be miserable] for half an hour. When I went in he was lying down but hopped up and smiled when he heard me.

He couldn't crawl he was so tired. He kept bonking his face into the carpet and lying there a while before whining at me to be carried. I was also bumping into things. We played a while [aka whined at each other] until 5.40am when I decided it was naptime. I nursed and put him down but he didn't agree and became suddenly animated and shrieked. I decided to try and give him 20 minutes to sleep.

It is now coming up to 2 hours awake and it is only 6.15am. I would go for a walk if I didn't have to get changed out of my PJ's. Even that task seems monumental. I am so fed up with this stage.
Posted by Shannon at 11:12 PM No comments:

Yesterday, Natasha and Douglas left on their long trip home to Natimuk. They had a colossal number of bags and objects including multiple laptops, bicycles and costumery but managed to get it all checked through to Melbourne (all 315lbs of it) with limited overweight charges. We miss them already and are having to make plans to get ourselves back into a getting out and going mindset.

The day before they left (Friday) we went down to the UW climbing wall and Frost and Doug had a go. Douglas managed to overcome more obstacles and scaled greater heights but Frost reached the top of the angled wall and was both alarmed and excited by it. Frost is struggling with physical activities because of his injuries - badly scraped toes on one foot after an accident at the Seattle Center Fountain and a nasty scabbed knee from falling over at the wading pool. Neither injury takes bandaids well so they are getting reinjured daily. Yesterday Josh and Frost tried to play soccer at the park but it was too painful to kick the ball and Frost says he wishes summer was over so he could stop getting hurt.

Frost and Wren on the climbing wall: 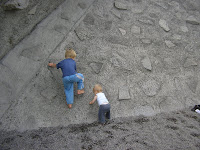 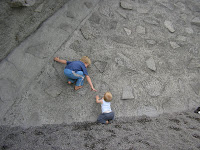 Douglas spotting Frost while he does a big move. 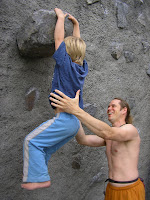 Natasha and Frost do a circus trick. 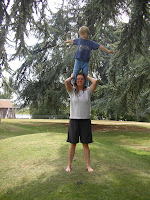 Wren and I hang around and watch and eat pine cones, well, moments before he was eating them. 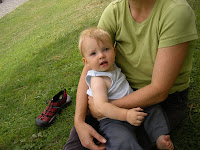 My mind remains addled because of sleep disruption. I am going to bed at 9.30 to be asleep before 10pm because Wren is goign to bed arond 6.15 and getting up at 4.45am (again). This sucks. Sorry, I have to say it. I have a new plan which is getting him to go to bed progressively later and seeing if I can keep wake-up time from staying the same. I am not sure how to make this happen other than hope hard enough. He actual night sleep is going well in his own room. Last night he cried for 5 mins at 11.30pm and midnight but Josh did not go in. He woke and nursed at 2.45 and then was up at 4.45 ARGH. I managed to stay in bed in the dark with him until Kitty Haiku came in and he tried to lurch off the bed to get the kitty.

This super early wakening gives me a very skewed view of the world. It seems that shops open ungodly late and it gets light late too (6.am). I want to do the Trader Joes grocery shopping at 6.30am but it only opens at 9am. I walked to Safeway in my quest for Ranch Dressing and Dijon mustard and was home at 7.30am after an hour's walk. I guess it is good for my health and weightbeing (yes, I started Weight Watchers yesterday and other than the temptation of left-over Bengal Tiger dinner, did okay).

While Wren had morning nap Frost and I watched REading Rainbow about pioneer families. Frost wants to go and stay at a pioneer village for a vacation sometime. I think this is a mighty-fine idea - especially if one could do it yourself rather than visiting a pioneer theme park, but even so. He had a hard time with the idea that you couldn't pop home to get something you needed.

Yesterday, I noticed Wren has more white patches in his cheeks and I suspect a fungal yeast infection (again, although our ped through it was not so last time). I have been giving him borax homeopathic on advice from our naturopath who we will see next week. ITs a long weekend here for labor day so it won't be until Tuesday. Wren doesn't seem too fussy about it unless I have to schoop somethign out of his mouth like bark, catfood, lego etc.

Okay, time to give Wren his pear breakfast and then head of to the belatedly open Trader Joes.
Posted by Shannon at 10:53 PM 1 comment: