Wren has just crawled up the stairs from the back yard on his own. He started getting on the first step and I followed him all the way to the kitchen!
Posted by Shannon at 10:05 AM 2 comments:

This morning, I opened my email to be greeted by the following note from my mother:

Poor Wren! Are you feeding him enough solids! I am on his side. There he is crawling around the floor foraging for food! Are you alerting everyone to be ultra-careful about little dangerous items being left around!" I have nightmares [about this].

For the record I am feeding him a wide variety of solid food throughout the day. I am not as systematic as Mum was due to a shortage of labor in our home. I am the labor and the bosses are restless.

Today, Wren has eaten rice cake, banana, spinach, sweet potato and one arrowroot cookie. It is only 2pm.

This morning Wren helped me in the garden. He climbed a tree and played in the mud. Here are the pictures I took:

Joshua watches Wren climbing out of the mud. 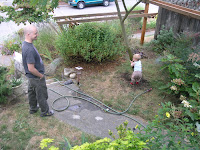 Wren plays in a muddy puddle while I water the albizia which is growing vast this summer. 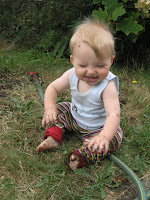 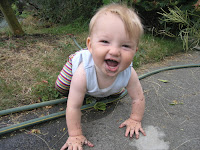 Wren stands at the back gate watching Kitties in the garden. 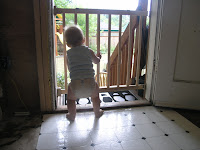 We just returned from a walk to Bagel Oasis where Frost had a bagel with his friend Nate, Clarissa and their Mum Laine. The whole family is moving to Norway and it was good to hear the latest on their preparations. We were going to have Nate for a longer playdate but Laine had to come early because he was stung by a wasp while we were walking to the restaurant. I had some thai chicken salad with roasted eggplant from Bai Pai (which I can highly recommend).

Now its Wren's naptime. This morning nap was only 35 minutes so I am hopeful of a longer respite this afternoon since Josh is going to archery and, if last night was anything to go by, it promises to be a long night.

Before I go, I want to share a link to a newborn baby with Shones Syndrome [Jelly Bean's Journey]. His family received a very similar diagnosis to Wren's prenatally and he had his coarc repair surgery a couple of days ago. I am sure that prayers and positive thoughts would be appreciated.

Wren has such large teeth that I call him "the shark". He likes to bite - pierce, gnaw, tear - at anything and everything. That includes raw potatoes (Tash was peeling for the gnocchi we made for dinner). She said he dug into them with his bottom teeth repeatedly. He also likes to bite my nipple when nursing. I don't look at him with quite as much affection thesedays.

He is now wingeing and whining and crawling after me because I took a gnarly piece of seaweed from his mouth.

Yesterday I removed:
* pebble
* bark
* lego
* rice cake and
* dirt
from his mouth.

He is almost cruising. He doesn't really move his feet but has started to rock and shuffle when standing and yesterday he lunged from the coffee table to the couch while standing. He made it!

His favorite places to pull up on are the gates, the baby einstein activity center, the world globe stand and the ottoman.

His favorite things to destroy are the telephone and the shell collection.
Posted by Shannon at 3:36 AM No comments:

Wren is eight months old today. He is eating rice cakes in crumbs, bits of carrot and he even had an arrowroot cookie yesterday (a la Joshua).

He likes to squeak through a baby whistle and stand up on everything. He also likes to hold long thin objects while he clambers about and gets very angry/upset if you take it away. Today, his long thing choices have been: a sharpie, a chopstick, a ballpoint pen, a playmobil lance and a magic wand.

He is now sqwarking at bedtime. His sleep is still fragmented - typically he is in bed by 6.45pm, wakes around midnight yelling his head off. We try and ignore this (ie, I try and sleep through it) or Joshua comes in and says soothing things. He wakes again around 3-4am and nurses. I put him back in his crib or sometimes fall asleep nursing and he wakes again an hour or so later (4-5am). This second time he used to stay awake for the day but now he tends to go back to sleep if nursed a bit and wakes for the day around 6am. If not for the fragmented early mornings I wouldn't complain as much but its pretty touch and go after 3am and I am still very tired even though I am asleep by 10pm almost every night (9.30pm being common!)

We have quit cloth diapering and are on Seventh Generation #3s.

Now the big news is that Frost had an echocardiogram today due to teh family association of CHDs. We just heard from the pediatrician that his echo was totally normal! This is a great relief. I am happy!
Posted by Shannon at 6:07 AM 3 comments: