Wren talks all the time

Most days, Wren and I are alone during the day and so we have only each other to talk to.  Now that Mum is here I realize that Wren talks, a LOT.   He has no sense of verbal space.  If I am talking to Mum he comes up and interrupts without hesitation.

He tells long rambling stories and great explanations for things.  Sometimes I want to record what he is saying and other times I wish there was an OFF switch.

Here are some comments from The World According To Wren:

In case you think Wren has bowed to pressure and become vegetarian, he often tells me:

"I eat meat and vegetarians"

"Indy Andy Jones is coming with his guys!" he says.

Here is a typical story, told to Granny when they were playing Lego minifigures:

"All the horrible massive looking guys must be on one side and we want to build a world with hummungous size.  We are making Littlies vs Big.  We put some of these guys on my cake when I was turning three years old. "

Frost and Wren have a love-love-hate relationship.  Wren sticks to Frost like glue.  At times Frost loves this and takes pride in his brother's devotion.  When Frost has finished eating he drifts from the table.  I call him back but before he returns Wren has leapt from his chair (food uneaten) because:

When Granny asked him why he must go everywhere, he said "because I LOVE HIM."

On other occasions Frost gets frustrated and wants Wren to leave him alone.  He has discovered that certain malicious glares and gestures terrify Wren but are not strictly violent by parenting standards.  Even a particular stance: legs a bit akimbo, moving slowly (like a zombie) will have Wren running in shrill terror or attacking.  Frost uses these tactics sparingly but to great effect.

This morning, Frost did The Glare and Wren kicked him. 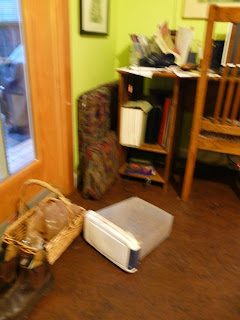 At 4.35am I was woken by loud thudding noises in the kitchen.  While half asleep I thought that Joshua was throwing away a lot of garbage.

"THUD" The noise of a door being closed.
"THUNK" Something falling.
"FWACK WACK ACK"

Suddenly my fogged brain realized that there were raccoons in the kitchen.

I shook Josh and we staggered out into the dark kitchen.  There were scuffling sounds and some more WACK WACKS as they escaped through the cat door.  Looking around we saw that they had been trying to get into the big catfood storage bin which has a latched lid.   I stuffed some sofa cushions in front of the cat door and a short while later spotted one on the deck trying again.

Really fed up with raccoons this morning.
Posted by Shannon at 2:19 AM 2 comments:

Chickens in the garage

At dusk, the raccoon family returned to try and eat our last chicken, Ruby.

Joshua ran out waving a shovel and nearly hit one.   He maintains that things like raccoons and deer are very cute until you live with them around and they eat your chickens, vegetables and poop on the garden.  Then they become verminous beasts.

Half an hour later Mum popped out to check and they were back:  a mother and 3 adolescents.  Mum yelled for me to get her a rock "I am very good at throwing things!" she said.

I turned on the hose and Josh squirted the mother but she wouldn't leave her youngsters who were hanging in the tree to see what we would do.  Josh squirted them while I pointed them out with a flashlight.

After we had (finally) chased them off we checked the run perimeter and found that they had already dug down a number of inches at the door (now reinforced) and side fence  (double wired).

Josh said he would check on Ruby every half hour but I still felt anxious so we decided to let her roost in the garage for a few nights while we conduct a test of our raccoon defenses.  That means, in the morning we will see whether the raccoons have made it into the run and/or the coop.

We hope they haven't but either way, Ruby is safe.  She is roosting on a nice 2x2 supported by a ladder and a couch with newspaper underneath.

We are tempted to keep our chicken in the garage forever.
Posted by Shannon at 2:46 PM No comments:

This morning, after googling "how deep bury chicken," we had a brief but poignant funeral for our chickens Sylvia and Chippy, killed by raccoons last night.  Wren made drawings of rainbows and Josh put them in paper bags labeled with their names.  They were good chickens.  They died too young - as mere adolescents - and I feel we failed them by not reinforcing the door enough.

There are signs of digging all around the perimeter of the coop where Joshua had laid chicken wire underground.  The place they finally got in is under the gate where the chicken wire was left off to enable the gate to move freely.  It seems as if they pushed in a section of gate and then pulled the chickens out underneath.

Ruby survived.  We are very pleased about that.  However, she has decided we are her flock and tried to roost on the back of a kitchen chair at dusk.  We have put her back in the coop (cleaned, as it had blood spatter and clumps of feathers) and have reinforced the gate, locked the nesting coop area (an interior coop that is more secure) and hope to find a friend for Ruby within the week.
Posted by Shannon at 11:48 AM No comments:

We have had a very sad early morning.  I woke in the half-light and saw that Syliva was dead on the lawn.   Chippy was nearby.  Raccoons had got into the coop by digging under the door and pushing through the wire.  They ate a bit of them and left their bodies with feathers everywhere.

We are all very sad, except Wren.  Frost and I are crying.  Frost wants to shoot raccoons with a BB gun.   Josh is wondering what to do now and Wren is making up scenarios about how the raccoons killed the chickens and how we could put up gargoyles to scare away raccoons.

Josh is considering a chicken funeral.

We now have one surviving chicken - Ruby.

We need another young chicken to live with her.

I don't think you can keep only one chicken.
Posted by Shannon at 12:48 AM No comments: