At about 12.08am wren woke up and yelled. I responded (foolishly). Wren was thankful. He woke again at 3am and I did not respond, at first. After half an hour of Wren chatting and crying and shouting, I went in to get him back to sleep more quickly. He was pleased. He was up for the day at 5.45am. Ugh.

This is my favorite Thanksgiving image (so far). It is from the Brothers-Brick blog. 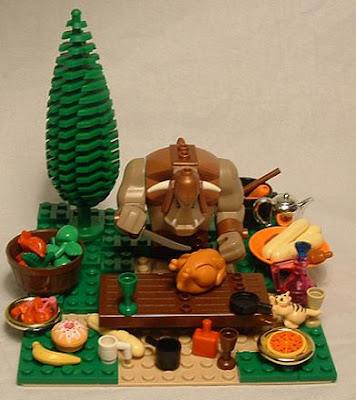 Posted by Shannon at 1:47 AM No comments:

The body in the basement

I think we have a body in the basement. I hope it’s a small one, perhaps the carcass of a rat or some unfortunate rodent which strayed into the crawlspace and could not escape. I don’t know what it is and am loathe to investigate because the basement is crammed with toys and clothes which I have saved to span the years between Wren and Frost along with all the plates and plattters from the unfinished kitchen, Joshua’s discarded computers and game platforms and journals from high school, every board game known to man and a lot of other crap beside.

Joshua says the air from the heating vents smells like burning bugs or hot dust and I have noticed large black flies coming up the basement stairs when I open it during the day. We really notice the flies at night because they are attracted to the living room lamps and it took some rushing around with the old masai zebra tail whisk to fell most of them. The few remaining we lured to the porch light by darkening the house and letting the icy night breeze come in the open door. I don’t like either of these signs. I asked Joshua to sniff around and find the origin of the burning dust-bug smell but he claims it is pervasive and non-directional. I have had a diminshed sense of smell since pregnancy (along with my diminised aural acuity which suggests some sinus issue going on) and can smell nothing short of burning fat or toast and in these I am helped by the signs of smoke and blackening, so I do not consider myself a good judge of stink.

Once, long ago, I found a dead possum in a fridge which had been stored in the garage by the owner. At first I thought it was the neighbors cat and only after calling around noxious cleaning services (and getting exhorbitant quotes) did I don a plastic smock and gloves and noseplug and go and clear it out myself. It was vile and scary and full of maggots and tragedy. Now these flies have me worried.

Joshua suggested they could be eating something benign like compost and that the thing could be very small to hatch a crop of flies but I am tainted by CSI and Grissom with his experiments and I know he would find something altogether more ominous. The other weird thing is that the flies are silent. In Australia and South Africa these large glossy black flies are called “bluebottle flies” and they make a large and irritating buzz as they move around. These fat black flies are noiseless. There were 3 of them in the bathroom and I heard not a sound. You could say that this was due to my (alleged) hearing impairment but Joshua did not comment on the noise so I suspect it to be true.

I will post more on this peculiarity when I have more clues.
Posted by Shannon at 3:48 AM No comments:

Wren is 11months and walking!

Wren is 11 months and one week old. Since yesterday he has moved from occasional tottering steps to taking up to 10 little steps towards a goal. His gait has changed. Instead of throwing himself forward in a plunging tumble towards my legs he makes steady little steps and stops himself between them. He is most likely to fall over onto his bottom if he loses his balance. He stands up at every opportunity.

He has also taken to climbing. He climbs onto the couch and then uses the side pillows to climb up to and sometimes ONTO my desk. This is over a meter off the ground and is haven for sharp implements, camera, laptop and various precarious stacks of CDs and papers. I do not like him being up here. However, Wren believes that he must do everything we do and since I am often at my laptop doing things to it he feel entitled to do the same. 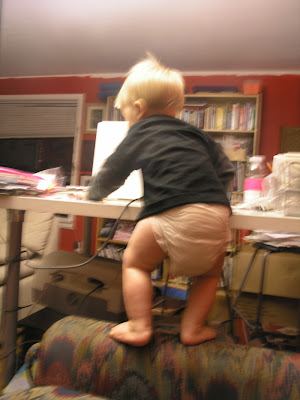 He also copies holding up the remote control to the TV and taking plates out the cupboard. When denied he becomes frustrated. He screams, falls over, cries buckets and then tries again.

I try and allow him as much freedom as possible and he is permitted to climb on the couch as long as he doesn't use it as a route to something higher.

Wren is also enjoying pushing the little red ride-on toy that Mum bought for Frost when he was 18 mths. He pushes it up and down the living room and into the kitchen, shouting in frustration when he bumps into something and cannot go any further. Sometimes Frost sits on the car and lifts his feet up and Frost pushes him hooting and happy.

Wren is still sleeping short nights (less than 10 hours) but only wakes once around 3-4am so I am getting some good stretches. He gets up for the day between 5.15and 5.45am. I wish he would sleep 11 hours from 7.30-6.30am but he hasn't agreed to my request. He naps well in the daytime - two naps that are 3 hours in total when he is not interrupted by carpool in the afternoon and errands in the morning.

Its late. I must go to bed but will write a few more anecdotes of Wren tomorrow.
Posted by Shannon at 3:15 PM No comments: