Fight big lizard with your claws

While he has been sick Wren has enjoyed a few "screen times" not rated for 3 year olds. One of these was Godzilla Tokyo SOS.

The movie has gripped Wren's imagination and he keeps wanting to fight big lizard with weapons, trap big lizard, be a driver INSIDE a bad big lizard (mecha-Godzilla). Here is yesterday's battle:
Wren: Bye-bye. I am going to fight evil lizard with my claw.
Me: Bye. Good luck.
Wren: I am going in my car [he is sitting in a blue plastic car in the garden]. YOU came in my car too. You are also in the lizard garden. 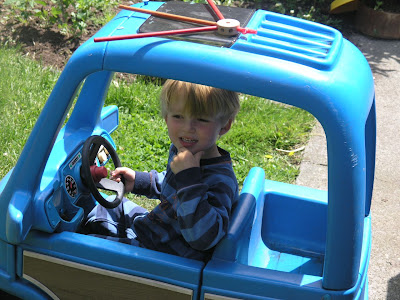 Heading off to fight mecha-Zilla with the claw on top
Me: Oh, ok. Are you going to defend me? [I am weeding the herb garden]
Wren: I will get a bomb to fight Mecha-Lizard-Zilla but NOTHING WILL MAKE HIM DIE. NOTHING EVER, EVER, EVER, EVER. NOTHING NOTHING.
Wren walks around menacingly chanting "Mecha-Godzilla" under his breath.
Wren: Mecha-Godzilla is still alive se we have to get him.
He throws a shoe onto the lawn.
Wren: I need to get some SACRIFICE.
[He carves between the slats on the deck with a popsicle stick, sawing and carving.]
Wren: You get your knife. You throw it at him BUT HE NEVER DIES! Mummy, come. Can you get under the deck?
Me: No, I am too big. I don't really fit.
Wren: I see something under the deck I need to get. Argh. I will get it. I get it!
He has retrieved a piece of sidewalk chalk forgotten under the deck. It is yellow. He walks over to the cement path and starts to draw.
Wren: I need to make a special pattern on the sidewalk. It will confuse him and he thinks its an item of a jewel. Mecha-Godzilla has a jewel. It is going to be the same as HIS jewel-thing. Mecha-Godzilla's jewel thing.
Me: Look what Mecha-Godzilla's jewel looks like! 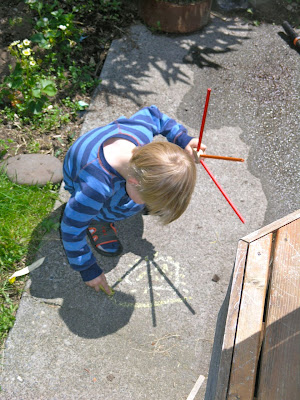 Wren with the jewel.
Posted by Shannon at 1:32 AM No comments:

Frost had his retainer fitted at the orthodontist today. The retainer is supposed to keep his teeth in the nice new spacious place created by the braces. It is to remain in his mouth almost all the time until his adult teeth come in.

After the fitting, Frost was given instructions on care and use of his retainer. Apparently retainers have a perilous life. Not surprisingly, since they are in the care of elementary aged children and must be removed and remembered after eating. They are at most risk out of the mouth.

According to the orthodontic nurse, Frost should always carry his retainer box (of which he was given two, one in a stylish sparkly black and one in glow-in-the-dark greenish white). He should remove the retainer and insert it in the box to eat. He should remove it to clean his teeth, clean it, and then reinsert for bed. According to a small girl in the dentist's office, he should also remove it to swim since "it could just dissolve in water." Her mother and I were skeptical of her reasoning, but apparently the orthodontist told her to take it out for swimming - perhaps because it could fall out in the water and be lost.

When a retainer is out of the mouth it should be in the box only. If not, bad and damaging things could happen. According to the dental nurse, here are the top ranked excuses for lost/damaged retainers:

1) I wrapped it in a paper napkin by my plate when I was eating then my Mom threw it away!

2) I put it on the table and the dog chewed it. [Apparently dogs love the smell of retainers and routinely chew on them and "eat them up". According to the dental nurse at Dr Sata's "When I worked at an orthodontist's office there was a night guard that is like a retainer and it was jut a dog toy if you didn't them in the box. And they were expensive!

3) I put it in my pocket and then I forgot and sat on it.

Frost is being remarkably conscientious about it. He worries about the location of his retainer box and whether it might go right down his throat (I said "no"). He worried about wearing it at school and taking it out for lunch. He even begged to be allowed to stay home because "It will take time to get used to it!"

Was it hard on the first day?

"No, it was easy. At lunch I just popped it in the box. Oh, but the lunch lady came around and gave us lollypops so I had to take it out and put it back two times. Do you want to see how I do it?"

I declined. My only concern is the number of times he sticks his (dirty, unwashed, school-germy) fingers in his mouth to move and remove it. Does he have to carry hand sanitizer now?

You know you've been home too much with a sick kid when time slows down in a bad way. You wade around through piles of laundry, plates of Perhaps-You'll-Eat-This-Food are stacked uneaten by the sink, you're in your pajamas at noon and you're starting to envy the garbage collection guy as he drives by in the truck.
Wren's cough is better today, thank you. Although it is still spasmodic he is not crying (whining) and choking incessantly.
Yesterday, he had coughing spasms every 10 minutes all day. As he felt one coming he'd start to panic and cry (making it worse) and then emit a high decibel squeak (making me worse) and then run around in agitation as he looked for his Cough Tea which had to be in reach at all times. I had brews of it in water bottles so he could take it in the car. Picture me driving to fetch Frost while stretching around to take and return an open bottle of honey-loquat licorice tea. It would be safer to text. He would drink and cough until it passed and then he'd cry for a while and ask when the cough would go away.
Last night we gave him a cough suppressant and he was up only twice with severe coughing. I am still Very Tired and feel I am on a Very Long Haul Flight - only there are no other passengers besides Wren and I.
I wish they had better in-flight entertainment in this place.
We have been making do with Diego and the iPad. We like Harbor Master and of course Plants Versus. When the kids are in bed I have been ploughing through the first season of Dollhouse on Netflix. It is just the right downtime. I feel I have a legitimate claim to more screen-time for Wren because he coughs less when he is calm. He was much worse when I took him out to fetch Frost for an orthodontist appointment (although I had to drop Frost off and come back when he was done as Wren was coughing too much for company.)
How many times have I used the word Cough in this post.
cough cough cough cough cough.
Now my dream:
sleep sleep sleep sleep sleep.
Last night I was up 12.30-1am and then 4.30-5am. I don't do well with nighttime diversions these days. Honestly, I never did well but now the contrast between sane and sleep-insane Shannon is more noticeable.
The one help for the unrelenting Illness of Wren has been Joshua The Soccer Fan. Josh usually wakes late and goes straight to work. This week he has been getting up at 4.30am or 6.30am and watching World Cup matches before going to work. The kids get up and have breakfast in the living room (its all a wreck) and I stagger out later and catch up on goals and coffee. But wait, there's more! Since Josh is on the couch and Wren is not well, I walk Frost to the bus-stop and then go for a short morning run before breakfast. This is very luxurious. I love doing exercise (yoga, running, swimming) first thing in the day. Its my natural joy but I haven't got to do it much over the years. Perhaps when Wren gets a bit older, I will be able to leave him with Frost and the sleeping prince for half-an hour while I run.
Time (and health) shall tell.
Anyway, today Wren is much better. He's happier. His cough doesn't frighten him as much. He's having fits of cough MUCH less often (like, one per hour!) and he had more sleep last night (despite the two wakings). I am hopeful that he is on the rebound.
A few people have asked if it could be pneumonia or even Whooping Cough. Wren is fully immunized and he does not have the whoop-style cough. He does throw up when he gets bad coughs and/or pneumonia - I think he has a sensitive gag reflex because he gags when he sees dog poop or smells something unpleasant. We don't think he has pneumonia because his lung check (the aural one) was clear, he is not wheezing, fever has gone and his sats were fine (97%).
I now believe that he contracted a second respiratory virus on top of the one he was getting over. He's always had a bit of a harder time with the coughs and colds.
Thanks for the concern.
Posted by Shannon at 5:31 AM 1 comment:

I took Wren over to the after hours clinic at Children's Hospital in Bellevue. My doctor has some kind of after-hours arrangement with the clinic so we went despite the schlep.
They did the usual and he checked out okay. The doctor said his lungs sounded clear but she would not be sure unless we ordered an X-ray. However, she left it up to me to do one now or watch him for another few days. She added that he had one "lesion" (it was an ulcer-like sore) on his throat which could be early coxsackie virus or he could have two viruses OR it could be pneumonia.
So, I decided to avoid an x-ray and watch for a few days to see how he does. His clear (sounding) lungs, no fever yet today, normal sats and normal respiration mean he's not in crisis even though he has a nasty-nasty wet sounding spasmodic cough.
We are drinking lots and he is feeling okay as long as I play with him ALL DAY LONG. Ask how I am feeling, ok?
Posted by Shannon at 7:44 AM 2 comments:

Wren's cough is now accompanied by a fever. It went up to 102.6 today before Tylenol. That, combined with vomiting during a coughing fit and increasingly rough cough, mean that we will be taking him to the After-Hours clinic tomorrow.
He was very sad at bedtime because he threw up on soft shirt. Soft shirt is his bedtime snuggly. It required washing to he went to sleep curled around a stainless-steel mixing bowl because he felt "throw uppy" when he coughs.
I am going to retrieve the bowl now and replace it with a warm and dry soft shirt.
Posted by Shannon at 2:29 PM No comments: