This is big news. Wren slept from 7pm-4.30am and then nursed. He woke again just before 7am.

It was so much later than usual that I managed to have a dream in that early restlessness. I dreamt that I got a Brazilian bikini wax by mistake when I went to the hairdresser. Don't analyze that. However, I have made an appointment with Laurie's hair-guy to have all my long hair cut off on April 4th.
Posted by Shannon at 7:07 AM No comments:

Yesterday I called the police because I thought I had found a severed human finger in the garden. I found it among the dirt and sawdust while cleaning up the back yard. At the time the kids were making leprechaun traps and fairy houses and I was looking for the source of a rotten smell. I expected to find a bird caught by the kitties but instead I turned the earth and a rotten finger appeared on the surface.

Here is a picture of it in the bucket. 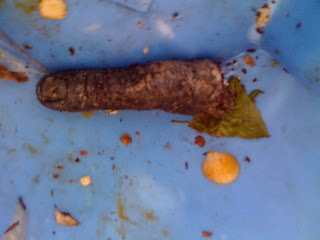 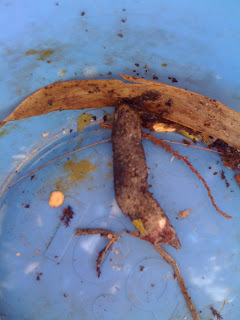 I asked my neighbors for their opinion and short of prodding and picking it up they felt it was real. We were all particularly impressed by the bit of gristle and bone protruding from the bottom. I also called the tree service which cut down our tree to ask whether they had had an accident while doing the job. My thought was that one of them had cut off their finger and lost it in the yard!

Of course, now I am out of the twilight zone such a quiet accident sounds improbable but at the time it seemed more likely than a raccoon stealing the finger from a neighborhood serial killer.

We emailed the picture to Joshua who commented that it looked rather like a rubber finger he had bought for Frost at Champion Party Supplies last Halloween. He said I should poke the nail with a stick and if it was rubbery then it was the fake finger. I kept thinking, but if its not?

Still, I managed to poke it and the texture was slightly rubbery if I tried very hard to believe so I canceled the police call (that was embarrassing) and promised to call them back if it turned out to be real when my husband had investigated it further.

When Josh came home he said it was definitely the fake finger. He remembered the shape.

Even then, I couldn't touch it.

The conversation with the tree service was very amusing. They assured me that they could not cut off a finger without the home owner noticing. And thus everyday reality was restored.

This morning I showed it to Frost and laughingly told him I had thought it was real. He said "Shannon that is very creepy" and when I offered him to take it to school [what was I thinking?] he wisely added "Shannon, that is very creepy. Its like a horror film. You wouldn't go and tell school about a new M-rated movie would you!"

I was chastised and put the finger in my pocket. All day I have imagined leaving the finger in different places (under the desk in the bank, on the seat of my car, in my pocket where I would appear to accidentally show it to someone) and fantasized about what people would do when they found it.

What would you do if you found what looked like a finger buried in your yard? How much investigation is warranted before you cry wolf?
Posted by Shannon at 3:03 PM 3 comments:

Yesterday evening Wren was playing in the garden and started crying suddenly. When I ran over to him I saw that his eyebrow had a small but deep cut bisecting it. It was bleeding a lot.

I called the doctor to see whether they might stitch it and they suggested I bring him in. I am glad they did. She said it was gaping and would need a stitch or two or a Dermabond seal to avoid a more noticeable scar. He will probably have a scar regardless although most of it will be in his eyebrows. I now have a reason to hope they are bushy.

He cried a lot when they squirted syringes of water to clean it and did not like being held down for the gluing. It worked well and was quick and he looks wounded but does nto seem to be in pain from it.

I am still unsure how he became injured and despite some sleuthing in the yard none of us has come up with a clear culprit.

We are going to try and babyproof the yard a bit more this weekend because he loves being out there and is very bold.
Posted by Shannon at 6:08 AM 1 comment: