I took Wren to the aquarium today. Its been a while since we were there and he was keen to see the octopus. I hobbled along with him (because I had a scooter accident and have a big swollen left knee) and sat a long time gazing at the big fish in the bubble. 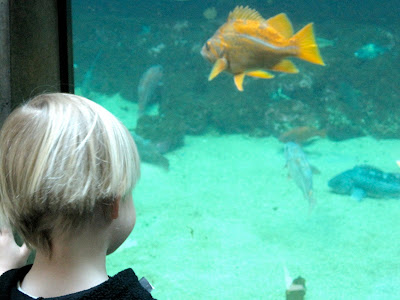 Sturgeon (below) was the biggest fish 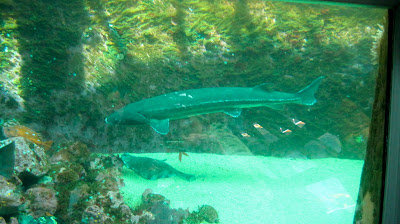 Octopus was stuck to the glass 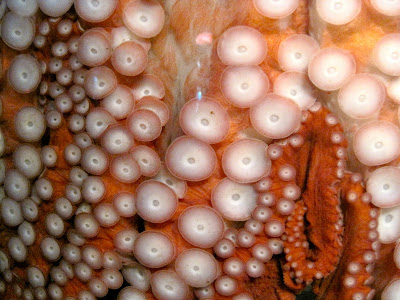 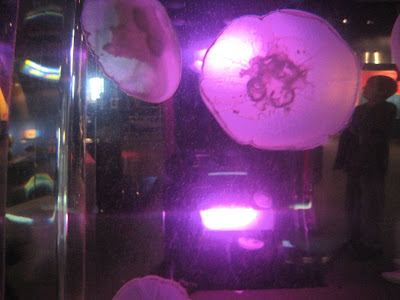 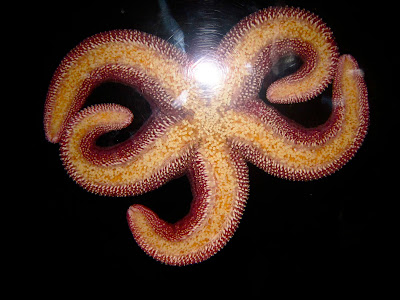 First {real} Haircut
This morning Josh said "I think Wren needs a haircut." I had thought the same thing so I took Wren to the hair-cutter today. I have tried this before and it was not successful [crying, thrashing, leaving half-cut]. This hairdresser was much better. She gave him a box of toys and started cutting straight away while he looked through the toys. This lasted long enough for her to cut Wren's whole head in layers. 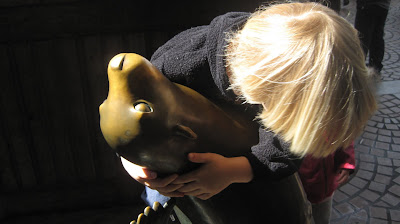 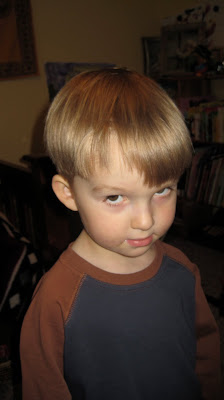 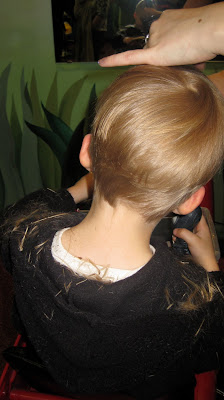 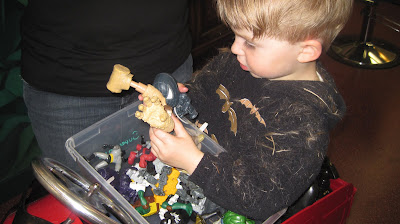 The Hairyness & Toys
Posted by Shannon at 2:41 PM 4 comments:

Frost has joined a soccer team, practicing on Monday afternoons. The first two weeks have been icy, rainy, dark. Because the field is some distance from our house, Wren and I stay at the park and play while he practices for an hour.
Last week, we saw a Grey Whale blowing in the bay at Carkeek while we watched from the bridge. It was incredibly cold. The wind off Puget Sound was so strong it went straight through my fleece and I had to hug Wren in my coat to make him wait.
This week, it was cold but without the wind, and the tide was out. We went down to the beach where Wren collected sea glass. No whales to see but Wren insisted on sitting down at the top of the stairs where we had seen the whales, and to watch the flat smooth sound in hopes of seeing one.
"They are there," he said. 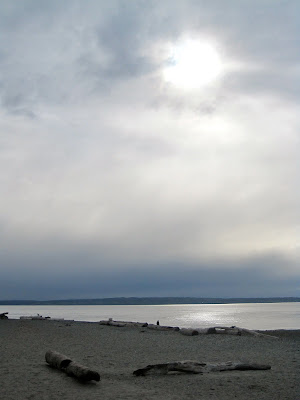 Posted by Shannon at 7:33 AM No comments:

Does anyone else see the problem with my fruit-bowl? Have those little stickers on your marmoleum floor? Have to fish them out of your kids mouth all the time?
I am really sick of branded food and the issue is more acute when its a kiwi, an individual banana, one lemon. I also object to having to buy grapes in those mesh bags. I presume this is because the bag is branded while individual grapes would be tricky to label. Not that I want to buy individual grapes, I just don't want to be the customer unpackaging grapes and cutting the 5lb bunch in bits so I can afford a bag. 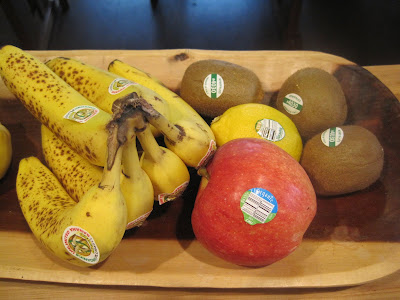 I know this is not particularly newsy but I am tempted to paint a fruit bowl, a la the old masters, with these stickers on them.
Posted by Shannon at 7:28 AM No comments:

Can I eat another part of him because I have ate his head?

Saturday
We took the kids down to the community center for the annual candy rush despite the cold. Having the two spare scooters we could all scoot along together and arrived ten minutes early. We waited in the gymnasium where there were volunteers holding age group signs. Wren was in the age group 1-3 while Frost was 7-9. There was greatest competition in the Age 4-6 category but the pressure was fairly high among the infants too.
Presiding over the event was an adult-costumed Easter Bunny. 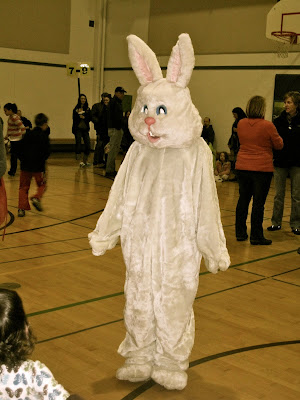 "I do not like the Easter Bunny." Wren announced. "I do not want to see him."
Other young children were hugging its legs and begging for candies as they posed with the bunny for cell-phone pictures. I managed to snag a photo between inundations and Wren liked to look at the picture. He looked at it many times until he dropped the camera and I put it away. Then he reminded me "I do not like the Easter Bunny."
We followed the unpopular bunny to the field and tennis courts which were covered with "treats". Wren walked around looking at the ground but not picking up anything. I knew why. Apparently 1-3 year olds do not get candy. It was all 'healthy' stuff like granola bars, lara bars (made of raw foods), vitamin C gummies and pretzel bags. This was not the promised land. 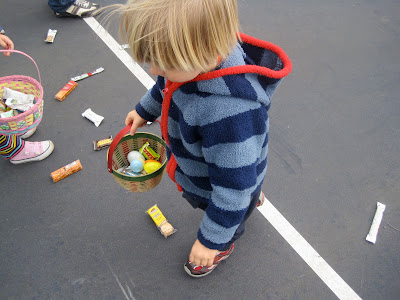 Does this look like an easter egg hunt to you Mum?
I persuaded Wren to grab a few choice Lara bars for us and then led him over to the 7-9 year old egg hunt which was about to begin. "On your marks, get set, GO!"
Wren rushed right over to some Reeces chocolate candy. I urged him towards a solid chocolate egg. This was more like it.
Frost rushed around collecting plastic eggs which had undisclosed treats inside. Most of these were not candy. Frost said he didn't care, he really liked the surprise. We ended up with strings of shiny bead necklaces, plastic rings and tiny animal themed erasers. 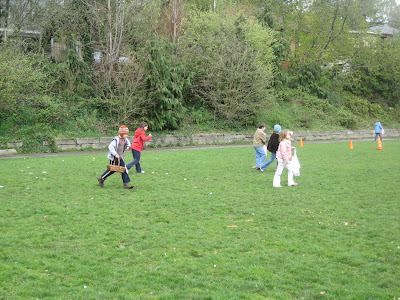 Frost races for mysterious plastic eggs
Of course, our home efforts at chocolate consumption made up for any deficit in sugar.
Later, I baked hot cross buns from scratch. From scratch, I tell you. I was inspired by the Trotsky and Ash blog (written by friends of Kellie in Brisbane). I used their recipe and it was a success! 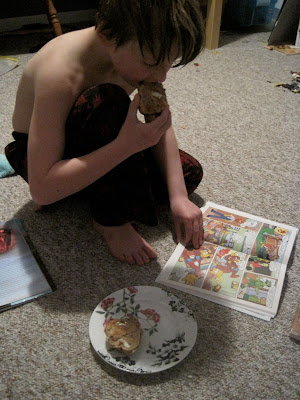 Here is Frost eating one for bedtime snack (with a Simpsons... still arguing about reading real literature vs comics. Honestly, gifted or not... this child doth not seek our Literature.) 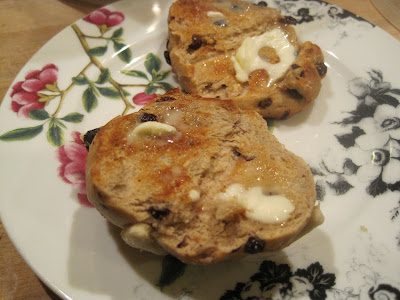 This is what they looked like at the end, toasted, buttered, aromatic. 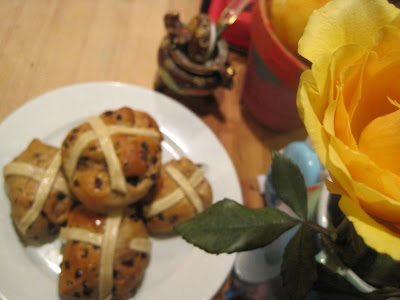 I was going for the "arty food blogger" shot but my point and shoot can't handle depth of field.. 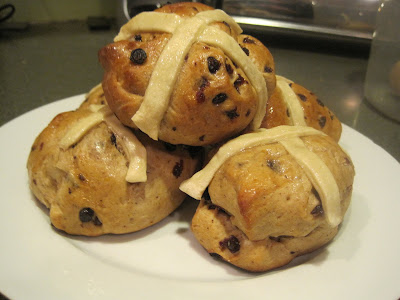 But I settled for the "lump of bun on a plate" shot instead.
Update: Sunday
At bedtime last night Frost asked me about my favorite part of easter when I was a kid. I said that my favorite part was The Family Egg which Dad brought home every easter from a chocolate shop. It was a huge chocolate shell filled with chocolate truffles, pralines and other individual chocolate delights. We broke it up and ate it piece by piece for days. Frost liked the sound of that and I am going to order a large chocolate mould so we can make our own Family Egg next year.
He also thought that they would have it at Haighs, the famous Australian chocolatier and wondered if we could ask GRANNY [Aside: Mum, please could you bring the kids a splendid chocolate from Haighs when you come and visit next? Could the shopping list also include Vegemite and another pair of blundstones for Frost. May need to be ordered over winter. ALSO, a pair of Ugg boots (faux is fine) for Frost. Will Pay!)]
After breakfast the boys opened their easter bunny chocolate.
Wren: "Can I eat another part of him because I have ate his head off?"
Me: "Yes, if you have eaten your breakfast".
Wren: "YES! Is is EATING CHOCOLATE DAY? I have ate his head now I am going to eat his base. Do you know why I am eating another part?"
Frost: "Why"
Wren: "Because its Tasting Chocolate Day"
Frost: What do you do on Tasting Chocolate Day?
Me [from other room]: Its called Easter.
Wren: EAT CHOCOLATE!
Posted by Shannon at 3:29 PM No comments: