Finally got my H1N1 Shot

I was driving through Maple Leaf yesterday when I saw a sign that the Maple Leaf Pharmacy is offering H1N1 shot appointments. I called this morning expecting them to be gone but they were open for the next hour and offering shots for the high risk groups. I popped up there and received a shot. As of today they said they have a good supply left and should be getting more next week. If you are still looking for either flu shot you can call them and make one for next week (they do not do shots on the weekend). They cost $20.

I read a news release that King County will be offering some free vaccination clinics this weekend for high risk groups so it seems that supply is finally catching up.

Remodel news
The new window is IN!! 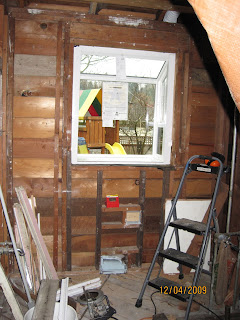 Return from the mists

There was a small break in transmission while Mum was visiting. Sorry 'bout that. Now that we have bundled Mum back to the antipodes and wiped our eyes and explained to Wren that Granny is not down in the basement on her own, we can return to our normal programming. Everyone is a bit shattered by Mum being gone. I am horrified by the amount of mess that is accumulating (while I nagged Mum about her inability to sit down, she was apparently doing cleaning because its absurd how much stuff is on the floor, door, chair, table). Wren wants to play "guys" all the time. This was a favorite game of Mum's visit. Mum and Wren set up little D&D & Heroscape miniatures and then shoot them down with a Playmobil cannon. Wren has an interesting vocabulary - "This is not an Oni, this is an ogre." he corrects me (wrongly) "Do you want the gargoyle or Subak-na bone dragon?" 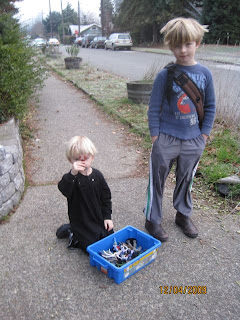 Magma guy at the bus stop
I am being a good sport and playing it many times a day but I wish we could have a bit more variety in our play. He is so obsessed with the game and the guys that he carried the box all the way to the corner to wait for Frost's school bus this morning. I think this photo is funny because whenever Wren is holding a guy he puts it straight in front of his face. He is showing you the guy and in front of his face is center stage.
Despite Mum's departure, things at home are not that quiet either. Our bathroom remodel began on Tuesday (after we returned from Great Wolf Lodge). Current status is: old bathroom removed but no new bathroom begun yet. There have been various wiring debates as well as some issues with the window placement. We are still not firm on the final layout and have not ordered the door or the tiles which can have a 2-3 week lead time. Does this mean we will be showering in the laundry for more than a month? We have yet to see. Watch for Updates! 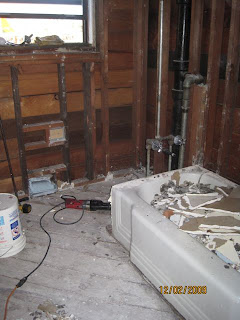 The bathroom a few days ago. It is now gutted.
The kids are doing ok with using the basement toilet but its a bit hard for Frost at night as he usually wakes at least once to pee and staggers around half asleep. Its hard to walk down to the basement without waking up so we gave him a bucket which he finds a lot of fun. Wren missed his nap yesterday but woke at 6.15am regardless. At bedtime he drank two small cups of hot chocolate and a glass of water. I was concerned he would wet his bed but this morning I was surprised to find Wren asking me if he "had a good sleep?" without any mention of an accident.
"Where did all the water you drank go?" I asked him.
"It went into this leg." he explained, tapping one with his hand. "It has all swished in. Lollipops go in this leg." he tapped the other.
This explanation of his body is a new theme for Wren. Yesterday he ran the whole way home from preschool while I pushed the empty stroller beside him. When he became tired he paused and opened his mouth to pant. Noticing this he told me that he stopped because he was "almost out of battery." or "emptying out from fuel." After a pause he set off running again because he got some left. If he opened his mouth he could get more fuel because "I points at it and the sunlight comes in my mouth!" He could run on sunlight. Don't we all wish?
Here's another of Wren's corporeal explanations. Before breakfast he was smacking his lips.
"What are you doing?" I asked.
"I am tasting my air," he said.
Reminds me of my wacky friend Sophie years ago who went off on retreat to learn to be a breatharian. She was very hard on herself because she couldn't live on air for the required 5 days. Later, we saw an article in the paper that the couple running the retreat was charged because a guest failed to live on breath, and died. I am hoping to eat banana bread this morning. And breathe.
PS: Wren peeling bark from a local tree. I just loved the depth of field on this picture. I haven't figured out how to control it on my point-n-shoot Canon but this worked. 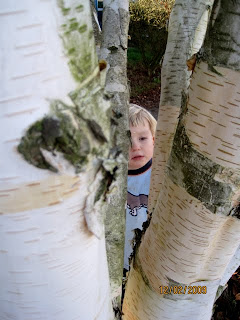 We were away at Great Wolf Lodge last night and now I am going to take the next 24 hours to recover. Recover from what?
1) Going backwards down the River Canyon Ride.
2) Going backwards into the Tornado [is there a theme here? Does the fattest person go first?]
3) Getting very little sleep with Wren waking in the lower bunk. Including waking up at 2am and saying "Mummy drew TWO TRUNKS!" It was true, I tried to fix the trunk on a drawing he was unhappy with and then the elephant had 2 trunks. He has not forgotten or forgiven.
4) Running up and down 5 flights of stairs collecting items for Magiquest QUESTS and ADVENTURES. It got to the point where Wren was stopping strangers to say "we are doing MAGIQUEST and the DRAGON IS DEAD!" My butt is dead -honestly - and my thighs.
5) From eating too many odds and ends on the breakfast buffet and then stopping at Jack -in - Box on the way home.
6) From coming home with suitcases to unpack and a bathroom to declutter for a remodel starting tomorrow.
Mum says "I think it was a very successful weekend for everyone, really." Mum has nerves of steel but Wren did not like The Big Dump.
Posted by Shannon at 9:28 AM No comments: