I was born overseas, and like many immigrants I am very happy living here but still retain a sense of being Forrin. I talk funny, had my children's passports issued before they turned 1 and occasionally read about politics and society in places as inconsequential as Africa and Europe.
Thus, it is always a surprise to me that I have an AMERICAN child. Here he is dressed up for the little 4th of July parade held by friends' children in a nearby neighborhood. One of the families provided the props, ribbon, tape and flags and the kids decorated their bicycles and scooters before riding around the neighboring blocks a few times (with Wren pumping his little leg as fast as possible to keep up and me, bringing up the rear on foot and out of breath). 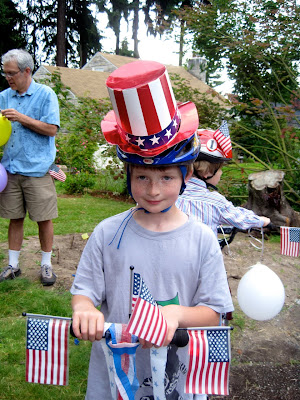 "Its the day that they signed the Declaration of Independence
from somewhere else." 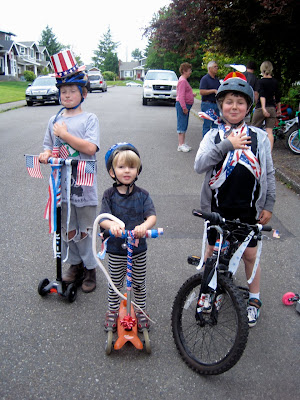 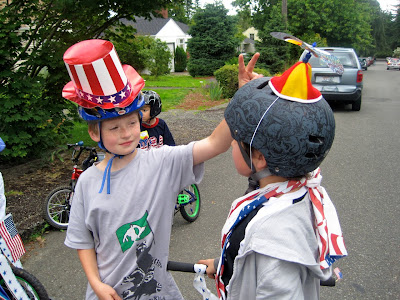 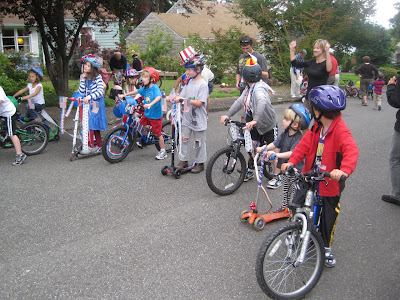 The parade waits for its escort 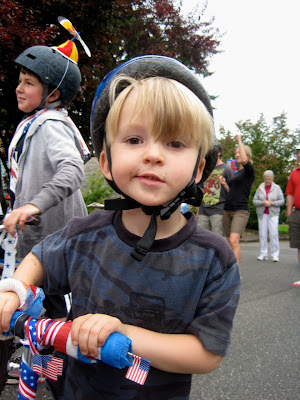 Wren is prepared - carrying his snake on one arm.
The Fourth is all about fireworks (for Frost) and we had been making a few visits to a TNT Fireworks tent over the last week. We bought small fountains and smoke bombs and a few larger ones with ominous names like Purple People Eater and Serpent. Frost lit off a few during the day with Elias. 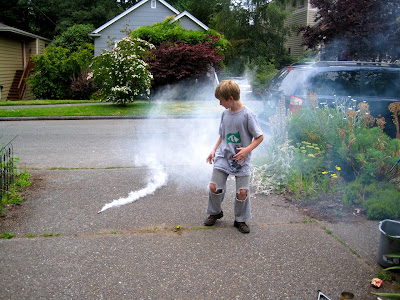 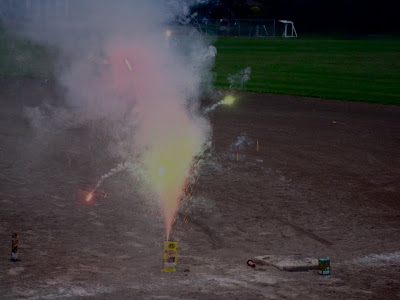 A fountain at the playing field 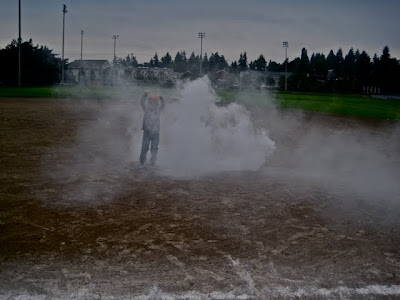 Alex dances in the smoke from his 'grenade'. He spent all his
money on 5 grenades with string pulls that made clouds of smoke. 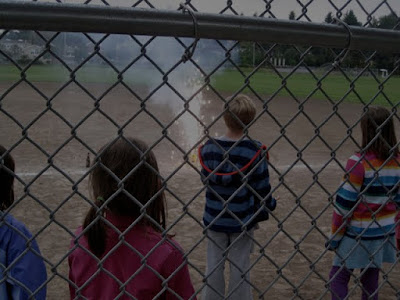 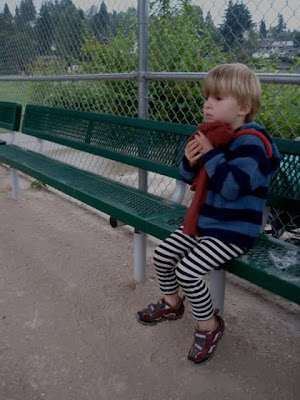 Although Wren was apprehensive and watched from some distance,
hugging his soft shirt for safety.
After the fireworks in the park we returned home quite cold to find Joshua had made a whole cherry pie from scratch. It was fabulous. Really, the pastry was one he found online and had odd ingredients like vodka in it - it was light and flaky and crumbly. We have eaten it 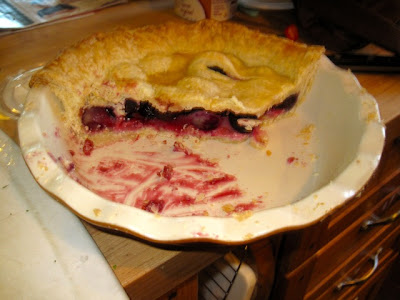 Posted by Shannon at 2:21 PM No comments:

Its the 4th of July and we have already have 3 fireworks 'sessions' with small fountains and fizzing things. Frost and Alex are ecstatic - Frost could barely sleep last night in anticipation.
However, I am not yet ready to post details of the fire-worthy events. Instead I bring you another very pixelated blurred Youtube video - of Wren cutting vegetables for soup. Wren has wonderful dexterity. He is very confident cutting shapes with scissors and I was so impressed with his meticulous cutting that I filmed it.
I didn't just offer Wren a sharp knife one day. He was trying to "help you cut vegetables" but the safe blunt knife was ineffective. I realized that if he was going to cut anything firmer than bananas it was necessary to use a sharper knife. So, I showed him how to use one of my real kitchen knives. He was very careful and cut them all up.
Posted by Shannon at 12:33 PM 3 comments: