I am a US Citizen (rather suddenly)

On Tuesday I had my US naturalization interview. After almost missing the author of the Declaration of Independence and being floored by a mis-read question "What is the current office of the president?" I PASSED. Since it was the eve of Veterans Day they were having a naturalization ceremony that afternoon so, after fetching Mum from the airport (Adelaide, Melbourne, LAX, Seattle!) I dragged her to Homeland Security for the two hour wait and ceremony. 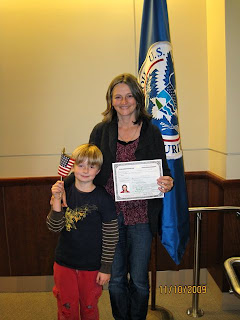 I am now an American and an Australian (I had to renounce my South African citizenship when I moved to Australia).
Posted by Shannon at 2:42 AM No comments: 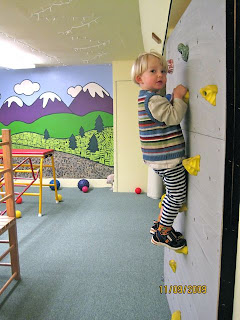 Wren went to preschool this morning. He loves preschool. He even loves his teacher and he definitely loves his songs. He often asks if it is preschool today.

Here you see Wren on the climbing wall in the large motor area of preschool. I should get Josh to take him some morning because it is lovely to see how happy and attentive he is there. During the two hour session he played climbing (a lot), splashing fish in the sensory table, pounding huge chunks of playdough into a volcano, swinging in a hammock swing and eating snack.

It was fun for both of us.

Mum called from the airport in Adelaide offering to buy me some Uggs. I was afraid they would be the wrong size but now I covet them. She should be on the plane now and will arrive tomorrow after my US Citizenship test and interview. Did I tell you I was freaking out? I had a nightmare last night that driving to the Interview the I90 Floating Bridge became FLOATING at waterlevel and I couldn't see the road so I nearly drove off it during a flurry of leaves. I reached Homeland Security and became lost in a maze of corridors staffed by military personnel. Argh.

Wish me luck. I am going with my study guide, my confidence in spoken english and documents regarding my arrest history and previous marriage.
Posted by Shannon at 8:11 AM 1 comment: