Tara and I took the boys berry picking today. It was hot (again) and we wanted to pick organic berries so we ended up at some farm out by Monroe that did not have the typical U-pick ambience. It was strange. We followed directions to the farm and ended up at what looked like a home remodel that had stalled at the sheetrock and plastic wrap stage. The family was living in a mobile home at the end of a nice concrete drive. At the side of the drive three little girls in swimsuits sat under a pool umbrella on a cement slab and a tree, shrieking with starlings, was the only shade for miles around.

I sent Tara to inquire.

Indeed, the man said, the raspberries are in the field so we loaded up with carboard flats and headed to the rows. The vines were very large and despite some trampling from other pickers it was still a bit of work to get down the rows. Canes had fallen over and tangled the path and it was not quick picking because many of the berries, though large and beautiful, were firm and unsweet. We felt they might be not quite ripe.

Wren screamed and cried for the half hour or so we took to pick a half flat. He hated the "sticks" that made it hard to walk. He wanted to go home, to the car, out of the jungle, to be carried. And he cried. Frost and Alex were also a bit weary of the picking although Alex actually DID some picking which is more than I can say for my kids.

On the way home from the desolate hot underripe fields we stopped at a sweet diner and had huge milkshakes and pie. Wren fell asleep in the car on the way home, transferred to his crib and took a 3 HOUR NAP. I slept for an hour too.

I have sampled the berries again and found that they are no sweeter. Tara says that someone took a berry from her box in the kitchen and she saw it discarded in the sink.

I have decided to make a little jam and to make the rest into raspberry frozen yoghurt or raspberry icecream, or perhaps both.

Now I am going to drink bedtime tea.
Posted by Shannon at 2:12 PM 2 comments:


This year Frost asked for a big chocolate cake with candy on. Here it is. He loved sticking malt balls, m&ms and Junior Mints all over it as well as the thick frosting I had already applied. We had to do the 'blowing out candles' twice because Wren missed it the first time while he was playing with the nerf guns on his own. 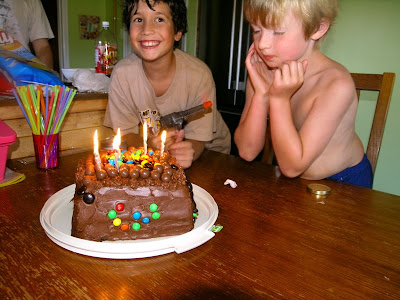 Frost and Elias with The Cake

It is very hot today. I ran around Greenlake with Lauren and am now drinking an iced coffee at Zoka. I wish I could have a week's vacation from vacation. I need some more alone time.

I am trying to decide whether I am really going to initiate crabbing in the face of Joshua's opposition. I would do it if Mum was here but if we catch crab am I really going to grab them, collect them and cook them as Mum does? Will I do it more than once?

Lauren has offered to lend us a fishing rod to try fishing in Greenlake. I think I need a crab-mate to make this more than an expensive impulse. Anyone? Anyone?
Posted by Shannon at 4:50 AM No comments:

Wren has a nintendo TOO 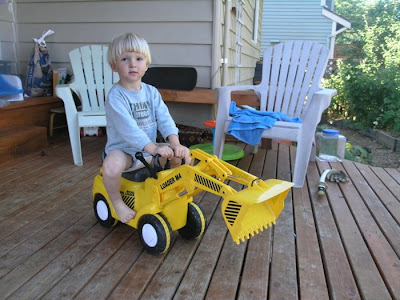 Wren found this digger at the Thrift Store last week. He loves his digger. Ever since Granny borrowed one from a toy library during our visit to Australia he has had this idea of riding ON a digger. Now he can. Remember this picture when you see the next one.

Frost received a Nintendo DS lite for his birthday. This morning he wanted to try it out. Wren wanted one too but I told him it was for big kids. Next, he went and found a pot lid and demanded a pen. I thought he was going to write on it. No, he was creating his own DS. As you can see in this picture Wren is copying the way Frost taps on his screen (his pot lid) with the pen. It breaks my heart and I stopped both of them playing "screen time" till late afternoon. In some ways, Wren will benefit when Frost is at school again! 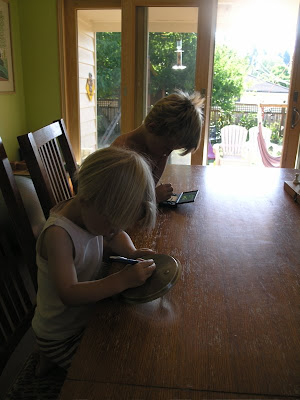 Also today, Wren has loved learning to fire nerf guns (even the big ones) and Frost made a lovely building out of his new Keva blocks. He asked me to take this picture to show Daddy. He used all 200 of the blocks in the set and says he needs MANY MORE LIKE 1000 like Matthew has!!! 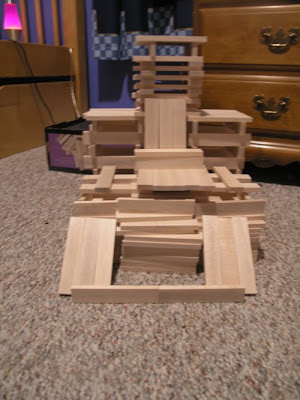 Among Frost's birthday gifts was an underwater camera from Granny. Frost put this to good use at the pool we went to with his friends. I wish they had taken more underwater in the outdoor pool as they are among the best. Inside, it was a bit dark and so most of our pictures are very watery and very blurry.
Still, I think you can see the potential! 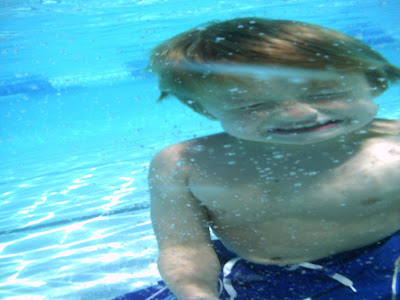 Frost underwater (I left his goggles so he can't see)
Meanwhile, Wren and I were playing at the inside pool. We were lucky to have a few parents stay with us by plan or misadventure. Thanks Laurie and Fred! Wren is increasingly bold in the water and says he is "very brave" as he jumps in on the count of 3. He has learned to climb sideways around the side of the pool and traversed the entire length of the indoor pool in this way. He is all goosebumped and cold but still demands to stay in the pool longer. 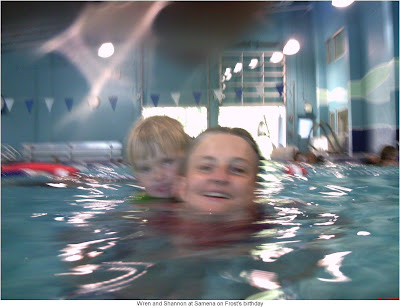 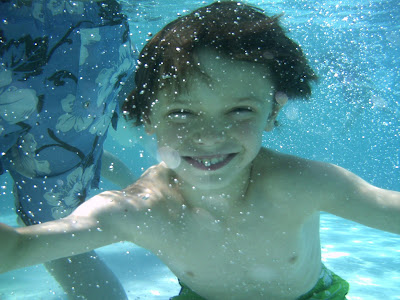 This picture shows the outdoor pool. We have had stunning weather this summer. Day after day it has been hot and clear so that we are all rather spoiled by it. My garden is needing a lot more water than usual but otherwise we are enjoying it. 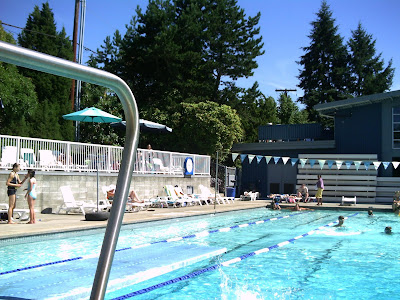 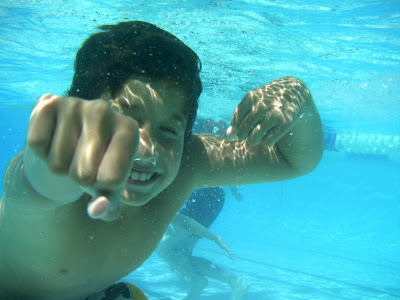 Its late and Josh has been practicing with the band. The house is not yet recovered from under the party debris and I have been snacking on cake this afternoon. To compensate, I met some swimming friends at Greenlake and we swam a few laps across the lake at the inlet to the North of the Boathouse. It was still and warm and a lovely way to get some mild exercise. It was also good to practice swimming in open water - surprisingly hard work staying out there! From the lake we could see boaters and Mount Rainier peeking over the homes on the East side of Greenlake. I am still feeling warm and motivated to keep swimming and running even if I don't do a Tri this year.
More on the birthday when I download the cake photos from the other camera.
Posted by Shannon at 2:51 PM No comments:

Today Frost had his 8th birthday. He had a lovely day with a few friends over for a swimming party followed by an informal and fiercely fought nerf gun battle that lasted a few hours. I shall make a special post about the birthday when I have downloaded some pictures. For now, I shall post a few garden shots to catch you up on the battle between the kitchen garden and the chickens.

Round One - to the chickens
While Dad was here he planted a number of different seeds - rocket, lettuce, carrots and peas. Of these crops, the chickens have proven most partial to rocket (arugula). Although it sprouted well and grew to a leafy 2 " it is no more. It has been eaten to the ground by the chickens on their daily hour or so out of the coop. We try and watch them but it takes only a few seconds for them to eat through a foot of young plants. This picture shows the stumps of the rocket crop. 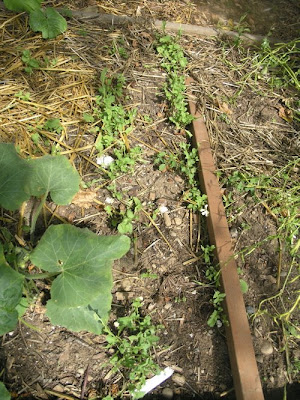 The lettuce has fared better since I put a wire mesh over it. They still try and eat it but few leaves are close enough. Sadly, the shade from the tree and perhaps the lack of soil enrichment has led to slow growth in this bed of lettuce: 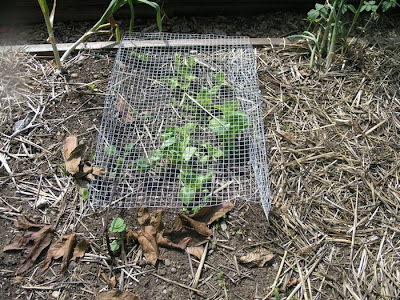 Round Two - The Beans
The victory has been the beans. Wren picked a packet of bean seed and it has been a bit like Jack and the Beanstalk. The packet SAID bush beans but these things keep on climbing and have produced a lush bed of mixed white, green and purple beans. They were too large for the chickens to do much damage and the beans are almost large enough to harvest. Wren has already eaten a few raw and is very excited to find them. When Dad was here he planted some basil seeds between the rows of beans, expecting them to behave like normal beans. They are overshadowing the basil and still growing strong. These pictures show Wren in the garden watering and holding a bean he has harvested. I hope you can see the beans. 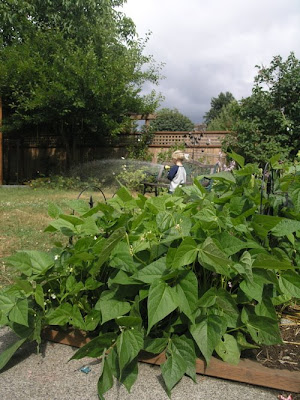 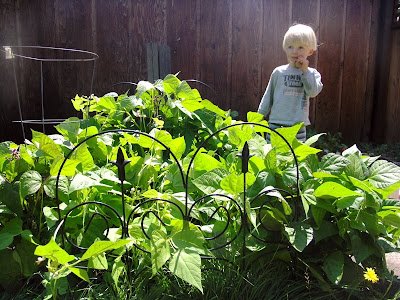 Posted by Shannon at 1:44 PM No comments: