Feeding Giraffes at the Zoo

On Friday, Wren and I spent our morning at the zoo. As always, it was a very fun visit and Woodland Park Zoo is the one membership I will gladly renew. It has become so popular recently that Wren has started to favor animals over diggers at playtime. He is still excited by any diggers that are moving (he says "digger night-night. Not MOOOving" if we pass a stationary digger) and has been enjoying an excavator working on our street but on a daily basis he interacts far more with his animals. 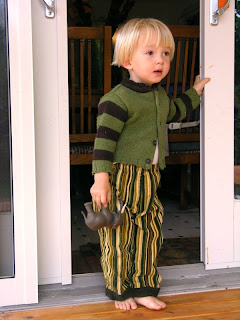 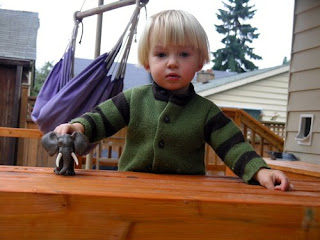 If I had to pick I'd say Untent [elephant] is his favorite animal to play with. These two pictures are Wren with elephant. Often he wakes up in the morning and goes to find untent and complains if its missing. Giraffe and flamingo [rarf and mingo] are others carried around in style. When we drive near the zoo he calls out "see 'mingos? Now? Mingos night night?"

Giraffe Feeding
On summer mornings at the zoo they have been offering giraffe feedings from a platform by the savannah gate. This means the giraffe are held in a small enclosure by the path and are very visible to onlookers while those who pay get to dangle leaves at them and have a picture up close. On Friday, we paid our $5 and fed the giraffe.

Wren found the giraffes very large and felt "bit scared." He was given some leaves and the brutish giraffe leaned right in to eat them. When Wren cowered away clutching the leaves to his belly the giraffe nuzzled his belly to get them. Giraffe have big teeth and black tongues like a gruffalo and I suspect Wren thought it was going to eat him.

Siamungs and Tigers
We were lucky at the tigers and the Siamungs. The apes were swinging and hollering (Wren is not sure he likes it but as soon as we leave he says "more, more." The tiger came out of his lair and walked around when the lion started roaring in the nearby enclosure. Since lion and tiger do not usually share a habitat, I am sure it was alarming. On both posts you can hear Wren commenting about the animals.


Pounce Joshua
And this one is nothing to do with the zoo except the kids are riding Josh like a horsie on the way to play POUNCE on the bed. I am not sure how long this game can continue but right now both boys want to ride on Josh and be thrown off onto the bed. 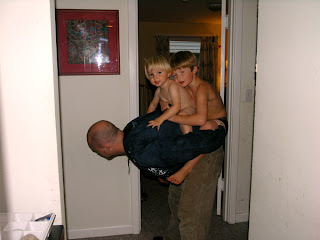 Posted by Shannon at 5:46 AM No comments:

For Shones Complex - multiple OHS are better than transplant

I subscribe to some citation search tools which alert me when an article is published on Shone's Complex. This cheery little piece came through my inbox this morning.

Apparently, from a study of 43 children with Shone's Complex - some of whom received a heart transplant while others had staged heart surgeries for mitral stenosis and LVOT obstructions, they learned:

Conclusions: Despite the challenges of a reparative strategy for Shone's complex, favorable survival and durability outcomes can be expected. Heart transplantation, although avoiding the pitfalls of staged repair, confers increased risks from ongoing physiologic derangements due to uncorrected left heart inflow and outflow obstructions during the wait for donor heart availability.

This means that on average without differentiating for severity of the presentation 88% of kids who had the kind of surgeries Wren faces lived for 5 years and 83.1% were alive after 10 years.

The 5 year survival rate for those who received a transplant was 63.1 % and no further children died by 10 years out. So, the initial risk was quite a bit higher for the transplant but it was stable once the surgery was a success. Of course, the longer term issues with transplant are murky.

At least, in Wren's case it seems that the risk of staged surgeries is preferable and since he has low level of mitral valve problem right now, that he has at least an 83.1% chance of being alive in 10 years.

Another little nugget was that 78% of kids who had LVOT repairs did not require reoperation within 7.9 years. That is not terribly encouraging since Wren has a relatively complex form of LVOT obstruction. Still, it does not contain enough detail [presentation, type of obstruction, surgical repair done, residual gradient, age etc] to draw meaningful conclusions.

Still waiting to hear from our second opinion cardiologist, Dr Krabill. I feel her delay is encouraging - it means she doens't just agree with Dr Lewin... she is doing her own research. I need that from someone else.

Posted by Shannon at 4:25 AM No comments:

Frost is an Offical Bad Influence. This afternoon Frost used his screen time to play Mariocart Wii. He wasn't doing well in the race and said "damn it. DAMN". Now Wren is saying "damn it!" with perfect mimicry, again and again.

He walks around stamping "damn it!" in his sing-song voice. "Damn it, damn it."

Frost is now barred from mild expletives as well as facing a screentime lockdown for language worse than this which was, thankfully, out of Wren's earshot.
Posted by Shannon at 10:20 AM No comments:

I spoke with our primary cardiologist at Children's who had been pondering Wren's case, data and second opinions since late last week. He has spoken with Dr Krabill who will call us later.

His final recommendation is to go into surgery anticipating a Kono procedure with mechanical valve replacement. Wren would be on Coumadin after that.

IF the surgeon sees that the valve is more robust than expected then he will revert to a valve-saving plan but that is not to be expected.

He believes that the surgery can be done successfully and well at both Seattle Children's and Stanford and that we should choose a place that has support for the family in case complications lead to a 6 week rather than 10 day hospital stay.

Reasons
The approach is based on our definition of good result. I think it is Wren NOT being back in OR for 2-5 years....

If we do a myectomy below and patch above. (myectomy - valve small and thick and not normally formed.) Our expectation is that leaving valve will lead to level of disease and obstruction that is unacceptable. Given we are NOT recommending the Ross for 2 different reasons... we feel that the kono with mechanical valve is the approach of choice.
Posted by Shannon at 7:31 AM No comments:

Recently every day feels as if I've waded through a week of days and its Friday. Not that the weekend is particularly different except the doctors are unlikely to call on the weekend, Joshua is home to play jump and leap and chase with Wren and Frost has soccer matches. Okay, it is a bit different. We eat more icecream and I cook less.

Anyway, right now I can get my bearings pretty quickly by running my mouse across my Firefox menu bar.

I had my school workshift training this morning and now have a break at Cloud City Coffee. Its one of the most civilized things about Seattle that almost every coffee shop has its own culture and its own wifi network so you can get a cup, have lunch and catch up on work while enjoying some public privacy. Its so much easier than the old days when you could only hang out as long as you felt comfortable with your book and then had to get BACK to things. Now I get right back to things over a grilled vegetable wrap, among adults, out of the house. Its so just-what-I-need that I really don't want to waste babysitting time going out for dinner.

Anyway, I digress with this mildly mopey tone. I opened blogger to write about Wren's vocabulary which makes me laugh 100 times a day, that, and the smell of the top of his head. As I am thinking about toddler vocab there are a group of parents behind me in the play area conversing on the same subject. Their toddlers are a bit older than Wren and are crawling around playing with trucks.

"Its amazing how fast their sentence structure starts forming. It blows your mind!"
"Yeah, but they come to things at different paces"
"He is making really complex sentences these days!"
"Owen, don't put the truck in your mouth honey"
"You like orange? Huh? Orange is a fruit!"
"You turn it, it goes different ways"

A new toddler is dragged in the door on his car. He comes in backwards and looks bewildered.

Perhaps I should bring Wren here one day - but I am not sure its a good idea to expose him to germs. We are still a safe distance from either surgery date and I am already considering Airborne, draconian hand-washing and isolation to try and keep him safe from respiratory conditions on surgery day. If he had a cold or flu at the time he would not be able to have anesthesia and we would be delayed for some time. With things like surgery I become a bit of a control freak. It feels that if I can keep things going as expected - even if expected is awful - then I can cope. So, I am expecting bumps, delays but I am trying to avoid a virus.

Argh, another digression. What I came here to post about was Wren's speech. He has suddenly taken a leap in his communication. He was always very articulate but he now uses many words in long, sometimes unstructured, strings. For example he spoke the Title sentence while I lay in pre-6am denial on the mattress in his room.

WREN: Un-tent gone, bye-bye. MISSing. Mommy, GET un-tent. GET NOW!
Me: What is an untent?
Wren: UNTENT!
Me: Where is the untent?
Wren: GONE!
Me: Where are you looking? Do you want me to get the tent?
Wren: Untent gone. Anmals.
Me: Oh, the untent! Its in the bath.
Wren: Door? Open?

[SHANNON STAGGERS OVER TO THE BEDROOM DOOR AND OPENS IT. KITTY HAIKU COMES IN AS WREN RUSHES OUT TO THE BATHROOM WHERE HE SEES UNTENT IN THE BATH OUT OF REACH]

[SHANNON GETS A BURST OF SPEED AND MAKES IT TO THE BATHROOM BEFORE WREN WAKES FROST IN THE NEXT ROOM. SHE RETRIEVES UNTENT [ELEPHANT] FROM THE BATH WHERE HE WAS SWIMMING LAST NIGHT]

So, I pile all the animals into Wren's arms and he carries them into his bedroom then comes back for more, opining loudly about them as he takes them back. They are wet, very wet, they are "raffes" and "horse" and "pigs" and "bear, raaah" and "BIG Animals" (dinosaurs).

Unfortunately, all this ruckus wakes Frost and its finally 6.15am and we are all on the floor with Wren, the only one wired and ready for the day, and I am certain we will play "train tacks", "block tower, big, very big. Fall down, now. HIT it." and "read book, diggers, many diggers.. WOOOOAH!" as well as "animals, out, now" at least once, before I get my first cup of decaf coffee.

Speaking of which, its time for one of those.

Posted by Shannon at 4:59 AM No comments: