A Mission, a Treasure and some Kung-fu Panda 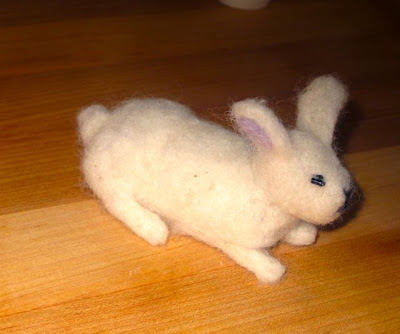 I have been making up animals out of felt - a late joiner of the needle-felting craze that has swept my friends over the last year. I have made a bunny, a starfish, a bat and a chickadee. It is quite magical and fun. I shall post pictures later (on this post or the next).
Posted by Shannon at 1:27 PM No comments:

Toured ANOTHER preschool today. Something must be wrong with me - I just didn't click with it even though it was nearby, highly reviewed and had a happy modified montessori vibe going. There was a pervasive smell of cat pee, the place was a bit rickety and I am not sure Wren needs to learn reading and writing (using Handwriting without Tears) in preschool.
When I asked about the academic focus and wondered what was going to happen in Kindergarten when these skills were typically learned, I was told that Kindergarten was really about social adjustment.
Hang on? Isn't that the wrong way around? Isn't kindergarten for the early literacy stuff and preschool about social adjustment?
Nope? Kindergarten is harder because it has more transitions so its better to get the academics done beforehand so the k kids can focus on all that hard social coping.
Sigh.
I used to be impressed when kids came to KapKa already reading and writing. Now, I see this as a manufactured skill. TICK. Reading. TICK. Writing. TICK. Ability to sit still and focus.
This all makes me feel rebellious.
Posted by Shannon at 11:17 AM No comments:

Mom is the future of the present,
she is a heart whose love knows no boundaries.
She is all my favorite things
stuffed up in one bundle.
She is a million birthdays
every second.
Every time my Mom says "hi"
Its like 1000 presents
but
my favorite thing about my Mom is...
her sense of humor!
[Like when I do something bad
You get kind of angry with me
but later, you get kind of happy with me.]
(and everything else)
but then comes WREN.
That's another poem.
Posted by Shannon at 10:49 AM 1 comment:

Wren and Frost have been telling me some startling things lately and I am reeling.

This morning Wren asked me "Where is the Mercy Killer?"
"The WHAT?" I asked.
"The MERCY KILLER!" he said, most distinctly.
"What's a Mercy Killer?" I asked, trying to figure out where this was coming from.
"Oh, I meant the X-wing fighter. Where is it?"

He could not be drawn on the Mercy Killer any more. What on earth was THAT?

Later, we were driving Frost to school late because he had a sore tummy this morning. Wren shouted "FORK INCOMING!" and a piece of cutlery came flying into the front passenger seat from the back. I flinched. It was not safe.

Now, on Zaboomofoo they use that phrase when an animal arrives: "Bats incoming!" but throwing a fork???

Frost laughed a lot so WRen kept trying to be funny again by saying "Boy incoming, dog incoming, house incoming" etc. Frost said that was not funny so Wren asked me what WAS funny. A bad influence, myself, I said that it would be funny if he could think of a funny thing happening like a Monkey pooping an olive.

OK, it was not funny. It was not wise.

"I saw a monkey pooping an olive." Wren said.

Nobody laughed. "The Police car poops" he said. That didn't get a laugh either.

Suddenly, as we approached school Wren said "WOAH, the monkey pooped an olive!"

Frost and I couldn't breathe we were laughing so much. His delivery was perfect.

He was confused about why it was funny and we could not explain it to him.

This afternoon Wren watched Zaboomofoo again. He dragged a rake and window sponge in from the back deck. "I am using my WAR Axe and my SPEAR" he said, sitting down. "No, actually, it is a battle tank! No, its a ZOOKA! This is a WAR HAMMER." 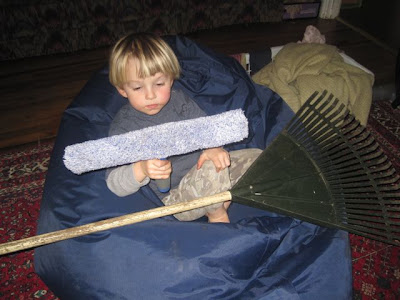 Wren with his Weapons
I can't even go into the stories FROST has told me.

Thank goodness Wren spent this morning in the garden with a pet snail.
Posted by Shannon at 7:54 AM No comments:

We were playing around on the field at Roosevelt on Saturday. After an hour of running and kicking soccer balls I decided to run around the track. I did a faux 'sprint start' on the track and WHAM, I tore my calf muscle.

Being older is a real drag.

I am now hopping, limping around.

Thankfully, soccer season is 2 weeks away so I am not really on the bench. I am on the couch though.

We went for a drive up towards Monroe today and had a fun time at a nursery buying herbs and a small maple. I hope to plant them (at a hobble) tomorrow.
Posted by Shannon at 3:45 PM 1 comment: